Thomas Cooper immigrated to Northumberland County, Pennsylvania, in 1794 after the French Revolution divided British society. He was a friend to both Dr. Joseph Priestley and Thomas Jefferson while living in Northumberland. He taught at the Carlisle College and the University of Pennsylvania. He moved to South Carolina in 1820 and assumed the presidency at the South Carolina College, as well as a professor at the institution. He was forced to step down from these positions in 1832 for his religious teachings. Thomas Cooper died in Columbia, South Carolina in 1839.

Thomas Cooper was born in London, England on October 22, 1759. He was born into a wealthy family, who was able to fund his higher education at Oxford University. While at Oxford, Cooper studied science, medicine and law, however he failed to receive his degree from the university. He left the university in 1779, which is the same year Cooper married Alice Greenwood, who bore him five children. During the summer of 1780, Cooper attended anatomical lectures in London and then proceeded to enroll in clinical courses at the Middlesex hospital. Cooper and his bride moved to Manchester, where he became the vice-president of the Manchester Literary and Philosophical Society in 1785. Between 1784 and 1787, Cooper visited London on a regular basis, and in 1787 he became a "barrister-at-law from the Inner Temple." Cooper was assigned to the northern circuit of the British court system, thus causing the Coopers to move to Lancashire.

In 1792, after the outbreak of the French Revolution, Cooper stated his enthusiasm for the French Revolution, and made a trip to Paris from March to May of the same year. Cooper became embroiled in a conflict with Edmund Burke over Cooper's support for the French Revolution. Edmund Burke stated that Cooper was a Jacobite who wished for the same type of revolution to occur in the United Kingdom. Cooper refuted these claims stating that Burke's assumptions were "ridiculous" and whose "invectives were intemperate." However, once the French Revolution moved from a political movement to mob terror, Cooper like many of the English revoked their support of the French Revolution. Feeling insecure in England, Cooper visited America in August 1793, and by his return to England in February 1794, he had decided to move to America. In 1794, he published Some Information Respecting America, which describes the positive aspects of the fledgling country. In this work Cooper examines the government of the country, as well as the cultural comparisons between America and England. Cooper and his family moved to America during the summer of 1794, and settled with the famous chemist Joseph Priestley and his family in Northumberland, Pennsylvania.

Cooper's decision to settle in Pennsylvania was based upon his previous expedition to America. He decided that Pennsylvania was the attractive state and the counties of Northampton, Luzerne, and Northumberland held the most promise for his success and ability to spread his political views. Cooper was an Anti-Federalist, which were lead by Thomas Jefferson, who Cooper became an acquaintance of through Priestley. Cooper was strongly against the Alien and Sedition Act of 1798, which established limits upon the idea of freedom of speech. Cooper felt that this act was unconstitutional that allowed the government to shield itself from bad criticism. In 1799, Cooper published his Political Essays, which were a series of newspaper articles from the Northumberland Gazette. These articles promoted freedom of the press and the denunciation of the Sedition Act. This work was instrumental in the election of Thomas McKean to the gubernatorial office in 1799, as well as helping Thomas Jefferson win the presidential election in 1800.

However, before the election of Jefferson in 1800, Cooper was sentenced to six months in jail for seditious libel against President John Adams in a 1799 handbill. This handbill defended the earlier position stated by Cooper in regards to the limits placed by government in the Sedition Act. While in prison, his wife Alice died. Upon his release, new Pennsylvania governor Thomas McKean appointed Cooper to the Luzerne commission and in 1804 he was appointed as resident district judge of Pennsylvania. However, Cooper was forced out of office in 1811 for "injudicious conduct" stemming from published works that focused on judicial and legal matters, which caused him to fall into disfavor with the radical Republicans (former name of what is now the Democratic Party) of Pennsylvania. Also in 1804, Cooper's friend Joseph Priestley passed away and Cooper wrote several appendixes to the Memoirs of Dr. Joseph Priestley to the year 1795, which was published in 1806. This work focused on Priestley's chemical discoveries, metaphysical writings, and his political and religious works and opinions. Cooper contributed a survey of Priestley's chemistry discoveries, which rekindled his own interest in the science field.

By 1811, Cooper was offered and agreed to take the chair of chemistry at Carlisle (later Dickinson) College, in Carlisle. While at Carlisle College, Cooper published his Introductory Lecture in 1812, which affirmed the practicality of chemistry and is considered to a "remarkable summary of the history of chemistry." In 1812, Cooper was remarried to Elizabeth Pratt Hemming; they had three children together. Also in 1812, Cooper became the editor of the journal Emporium of Arts and Sciences, and remained its editor until the end of the War of 1812 in 1814. This journal focused on the new technology and political economy that Americans were faced with in this time period. In this journal, Cooper made a suggestion to President Madison to pursue the study of rockets and for a new type of shell to use in warfare. By 1815, Carlisle College was in financial disrepair, causing the departure of Cooper to another Pennsylvania university.

In 1815 he accepted the position of teaching chemistry and mineralogy at the University of Pennsylvania. Over the course of his teachings and experimentation, Cooper was awarded and honorary Doctoral degree from the University of New York in 1818, which allowed for Cooper to apply for the chair of chemistry in the Medical Department at the University of Pennsylvania. He lost the position and subsequently published Discourse on the Connexion between Chemistry and Medicine. This essay, Cooper emphasized the importance of medical chemistry and that the study of chemistry in medical usage was in its infancy, but has a strong future ahead. By 1820, his reputation had spread as a leader in the field of science, causing his departure from the Commonwealth.

Cooper and his family moved to South Carolina and he was appointed professor of geology and mineralogy, as well as elected president of the college at South Carolina College in 1820. In 1820 he gave and published his Introductory lecture on Chemistry. This lecture stated the utilitarian role of the sciences and the importance of science in the developing American society. This lecture also focused upon the discoveries and inventions in the scientific fields over the years. In 1821, Cooper published Address to the Graduates of the South Carolina College, which described religions as a potential force for creating good citizens, while classical studies show individuals a guide to self-improvement. In 1824 he published a very influential pamphlet entitled Consolidation which challenged the constitutionality of the federal government and favored the individual rights of states to govern themselves. By 1830, Cooper's anti-religious teachings caused for his removal as the president of the college, and by 1832 he was dismissed from the college altogether, but he defended his right to free discussion. His final major work was commissioned in 1835 by the governor of South Carolina. Cooper was asked to compile and edit the statute laws of the state. These compilations were published in five volumes in 1839.

This biographical sketch was prepared by Michael Heintzelman.

A political figure from Britain, Thomas Cooper fled to Northumberland, Pennsylvania, becoming a friend to Joseph Priestly and Thomas Jefferson. 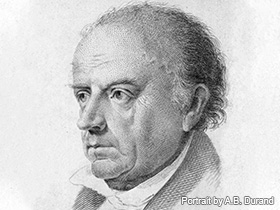