One of the original founders of the National Association for the Advancement of Colored People (NAACP), W.E.B. DuBois was a prolific writer whose work advocated against the injustice to the African-American of the early 20th century. His book, The Philadelphia Negro (1899), examined the findings of an 1896-1897 study conducted about the lifestyles of African-Americans living in Philadelphia at the time. W.E.B. DuBois' voice spanned the globe as he spoke out against all social injustices.

William Edward Burghardt DuBois was born on February 23, 1868, on Church Street in Great Barrington, Berkshire County in western Massachusetts. His mother was Mary Burghardt and his father was Alfred DuBois, but W.E.B. DuBois never met his father. DuBois was born just five years after the Emancipation Proclamation, but because he grew up in a small community where racial injustice was not an issue, he did not experience racial oppression himself until his early college years. This oppression propelled his academics, driving him to be the first African-American to earn a PhDfrom Harvard University. That same drive led him to the role of social advocate.

Throughout his life, DuBois was founder and/or editor of numerous newspapers and magazines, including Fisk Herald (1887-1888); The Moon (1906); The Horizon (1907-1910); The Crisis (1910); The New Review (1913); The Brownies' Book, a magazine for children (1920- 1921); and Phyon (1940). DuBois also wrote several essays reflecting the struggles of the American Negro of the time, including Strivings of the Negro People (originally appearing in the Atlantic Monthly in August 1897), A Negro Schoolmaster in the New South (Atlantic Monthly, January 1899), The Freedman's Bureau (Atlantic Monthly, 1901), The Evolution of Negro Leadership (The Dial, July 1901), and Of the Training of Black Men (Atlantic Monthly, September 1902.)

Chiefly a writer and editor engaged in advocacy, he taught in many different areas of interest to supplement his income. From 1894 to 1896, he was a professor of Greek and Latin at Wilberforce University, Ohio. He was an assistant professor of sociology at the University of Pennsylvania from 1896 to 1897, and from 1897-1910, a professor of economics and history at Atlanta University. He was also a board member or chair of many political and social organizations. Most notably, in 1908 DuBois became one of the founders of the National Association for the Advancement of Colored People (NAACP), one of the most influential organizations for the advocacy of African-Americans.

In 1899, W.E.B. DuBois wrote The Philadelphia Negro (U of Pennsylvania P, 1899). This work was a commentary on a study financed by the University of Pennsylvania involving over 40,000 African-Americans living in Philadelphia from August of 1896 to December of 1897. DuBois completed all aspects of the study on his own. He arrived in Philadelphia in 1896 and lived in a room above a cafeteria in the old seventh ward with Spruce Street to the North, South Street to the South, Sixth Street to the East, and Twenty-third Street to the West. The study examined the living conditions and attitudes of the Philadelphia-based African-American. The study focused on the geographical distribution of the race, occupations and daily lives of the participants, their homes, organizations they belonged to, and most importantly, their relation to the white citizens of Philadelphia. This study became known as the first great empirical book on the African-American in American society. DuBois said of his project in Dusk of Dawn, "It revealed the Negro group as a symptom, not a cause; as a striving, palpitating group, and not an inert, sick body of crime; as a long historical development and not a transient occurrence." DuBois delved into the history of the Pennsylvanian African-American specifically but also expanded it as a guide toward solving the many African-American problems within most American cities at that time.

Interest in the Niagara Movement began to wane until it was subsumed by the NAACP. DuBois served as the director of publications and research, and he sat on the board of directors from 1910-1934. During the First World War, DuBois fought against the maltreatment of African-American troops and investigated the racist treatment of the African-American soldiers in Europe. His expos?? created an international sensation. DuBois also lead the efforts to enroll African-American officers into the military, and in 1917, he led a massive silent protest parade down Fifth Avenue in New York City against lynching and Jim Crow.

W.E.B. DuBois was a prolific writer and speaker on the injustices of the world. He was a fighter not only against racism, but also against illiteracy, poverty, imperialism, and war. He wrote weekly columns for many publications such as the San Francisco Chronicle and the Pittsburgh Courier and delivered thousands of speeches and lectures all over the world. As a result, W.E.B. DuBois received considerable awards and honors. Most notable were the International Peace Prize, the Lenin Peace Prize, and Knight Commander of the Liberian Order of African Redemption. He received Honorary Degrees from Fisk University, Howard University, Atlanta University, Wilberforce University, Morgan State College, University of Berlin, and Charles University in Prague.

In 1961, W.E.B. DuBois took up residence in Ghana at the invitation of President Nkrumah; he became a citizen of Ghana two years later. When W.E.B. DuBois died on August 27, 1963, he was given a state funeral in the capital, Accra, and is buried just 100 yards from the Atlantic Ocean. 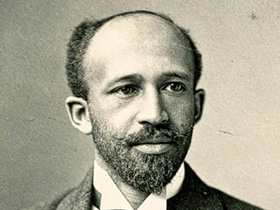