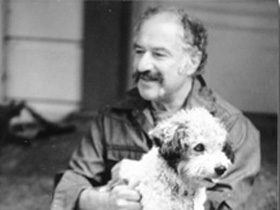 Although mostly an author of young adult fiction, Aaron wrote about his passion for garlic in Garlic Is Life: A Memoir with Recipes(1997) and The Great Garlic Book (1997).

Chester Aaron, a graduate of Butler High School in Pennsylvania, is an accomplished writer and garlic farmer. His writing career has spanned over four decades and he is best known for his first novel, About Us (1967). Aaron continues to write novels and recipe books in his home of Occidental, California.

Chester Aaron is the son of Albert and Celia Aaron, two Jewish immigrants from Poland and Russia, who moved to the Pennsylvania mining town of North Butler. He was the youngest of seven children and grew up on the family's small garlic farm. After graduating from Butler High School in 1941, Aaron joined the army. He was stationed in southern Germany during World War II where his knowledge and love of garlic, an alleged pain reliever, came in handy when penicillin was limited. After the war, Aaron studied at the University of California, Los Angeles and later finished his degree at the University of California, Berkeley. After graduation, Aaron worked as an x-ray technician for a hospital in Berkeley. During this time, he worked on his writing skills and in 1967 was able to publish his first novel, About Us (1967), with McGraw Hill. Shortly after About Us was published, Aaron received his master's degree from San Francisco State University and began teaching at Saint Mary's College in California.

Throughout his four decades of writing, Aaron has written many young adult novels on subjects ranging from science fiction to the Holocaust. His 1986 work, Lackawanna: A Novel, has a strong connection to the Pennsylvania Railroad through the characters' adventures on the Lackawanna freight cars. The Erie-Lackawanna Railroad traveled from New York City to Chicago and had lines that branched off into Pennsylvania cities, such as Scranton, Oil City, and Meadville.

Aaron has been awarded several grants for his writing by the National Endowment for the Arts, the Huntington Hartford Foundation, and the Chapelbrook Foundation. In 1982, Aaron's book, Duchess (1982), was honored by theChildren's Book Council.

At the time of this writing, Aaron lives in Occidental, California, where he grows 92 varieties of garlic from 30 different countries and continues to write. Since 2002, he has had nine books published, including his most recent, About Them (2011), a sequel to his first novel, About Us. His subject matters rangefrom young-adult fiction to plays,from garlic commentaries to murder mysteries. Aaron has enjoyed sharing his knowledge about writing and farming with his community by taking part in the PBS series, California Heartland, in 2003 and by developing a series for NPR called, "The Ninth Inning: A Strong Taste for Life," in 2009. Chester Aaron was named a distinguished graduate by the Butler High School class of 2011, who selected him for his craft expertise, as well as his impact on the community. In 2014, Aaron published The Marriage of Mushrooms and Garlic (co-written with Malcolm Clark, Suzanne Adams, and Pic Sangsana), a collection of recipes and stories exploring the varied unions of mushrooms and garlic.