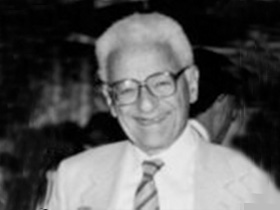 Robert D. Abrahams was deeply involved in the law profession while he maintained a career as a poet and as an author of juvenile fiction.

A lawyer, writer, and poet, Robert D. Abrahams balanced his many interests with a healthy sense of obligation to his community and to his Jewish heritage. Born in September of 1905, he received his law degree in 1925 and was active in Philadelphia's justice system until his death in 1998.

Robert David (D.) Abrahams pursued varied interests, ranging from poetry to law, throughout his long life. Born to William and Anne Abrahams in 1905, he spent most of his years working and writing in the city of Philadelphia. At less than 20 years of age, Abrahams decided on a career as a lawyer and enrolled in the Dickinson School of Law, receiving his degree in 1925. In the same year, he was appointed to a minor position on the 1926 United States Sesquicentennial Exposition board, serving as the commissioner general to Europe's secretary.

Abrahams' career began to flourish in 1927 when he became an assistant city solicitor. In 1931, he was appointed Philadelphia consul for the Dominican Republic, a post he held for 32 years. The intrepid lawyer and a colleague of his started their own law firm, Abrahams & Loewenstein, which evolved over the years into Abrahams, Loewenstein, Bushman & Kauffman. His interest in the public good led him to serve as chief consul for the Legal Aid Society of Philadelphia, and he has been named a Legend of the Philadelphia Bar for creating the Philadelphia Neighborhood Law Office Plan. The first successful legal service arrangement for middle-income families, the Neighborhood Law Office Plan was established in 1939 and initially charged three dollars for each half-hour consulting session. Beyond his professional life, Abrahams was happily married to Florence Kohn and was father to three children, Richard, Roger, and Marjorie.

Somewhere between the demands of work and family, Abrahams found time to write. Dabbling in poetry, his first collection, Come Forward, was published in 1928. Two more volumes, The Pot-Bellied Gods (1932) and Three Dozen (1945), followed. He wrote several novels for children and adults, including some inspired by his Jewish heritage, in the 1940s and '50s. Abrahams' literary streak had also led him to edit the Independent, a weekly publication, in 1932. Throughout his life, Abrahams contributed numerous articles and poems to legal journals, Esquire, the Saturday Evening Post, and other publications.

In his middle years, Abrahams continued his altruistic tendencies by serving as president for several nonprofit organizations: the Community Health Center, the Jewish Family Service, and the Pennsylvania Prison Society. He was executive director of the Philadelphia Community Legal Service as well. Spurred by an interest in educating others, he also taught several courses at Philadelphia's Temple University. After the death of his first wife in 1975, Abrahams married Jane Sunstein Freedman in 1977. Twenty one years later, Abrahams himself passed on in mid-February of 1998.