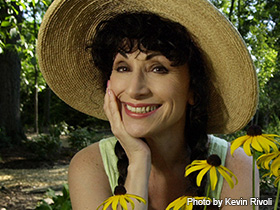 In her youth, Diane Ackerman spent many years living in Allentown, Pennsylvania, and began developing her talent as a poet. She received her undergraduate education from the Pennsylvania State University (Penn State) and her graduate degrees from Cornell University. Throughout her writing career, Ackerman has served as a poetry judge, lectured at major universities, and had many of her poems printed in major publications. She has been presented with awards, including the Academy of American Poets Prize, and has received grants and recognition from prestigious foundations such as the National Endowment for the Arts (NEA). She has also earned respect for her scientific writing.

Diane Ackerman was born on October 7, 1948, in Waukegan, Illinois. Ackerman was born to Sam Fink, a local shoes salesman, and Marsha Tischler Fink, whom Ackerman describes as a "seasoned world traveler." Spending most of her youth living in Allentown, Pennsylvania, Ackerman states that she can remember having "poetic tendencies," even at a young age. She remembers "flushing with wonder at the sight of [her] first metaphor—the living plums: the bats." As a child, Ackerman had an outlandish fascination with nature, animals, astronomy, and the universe. These were subjects that intrigued the young writer. Ackerman attended Boston College from 1966-1967 and then transferred to the Pennsylvania State University where she received her BA in English in 1970. Determined, Ackerman continued her education at Cornell where, over a seven-year period, she earned a Master of Fine Arts (MFA) in Creative Writing and an MA and PhD in Literature. Ackerman married Paul West, also a writer. Since early in her career, Ackerman has been considered a plethora of things: poet, author, travel writer, and essayist. Even Ackerman herself is not sure exactly what to call herself.

While attending graduate school, she was the recipient of various awards for her work, including the Academy of American Poets Prize, which aims to provide the most important collection of awards for poetry in the United States. Again, in 1985 the Academy of American Poets honored her with the Peter I.B. Lavan Award, an award that recognizes talent among young poets whom have published at least one full-length book of poetry. Ackerman has also been given the honor of participating as a panel judge in many prestigious poetry competitions, including those of the New York Foundation for the Arts (1987) and National Endowment for the Arts (1991), evidence of the respect she gained from fellow poets. She has also received grants from organizations such as the Rockefeller Foundation and the National Endowment for the Arts, the nation's largest annual founder of the arts, dedicated to supporting excellence in the world of art, bringing the arts to all citizens of the United States, and providing leadership in arts education.

Although Ackerman has received ample praise for many of her poetic works, A Natural History of the Senses (1990), a work of prose, is perhaps her most important literary contribution to date. Described as an "encyclopedia of the senses," this book, celebrating the power of human perception, is intermixed with an assortment of history, biology, anthropology, cultural fact, and folklore. This best seller has been published in 16 countries and developed into a five-part PBS miniseries entitled "The Mystery of the Senses" (1995), on which she served as host and executuive editor. Other books that have received notoriety include Twilight of the Tenderfoot (1980), a work of prose that recounts her adventures living the life of a cowhand at a cattle ranch located in the heart of New Mexico; and On Extended Wings (1985), a memoir, that illustrates her experiences as a student pilot, which has been described by Karen Rile, a book reviewer, as "a poet's notebook with wings" because of her brilliant use of metaphors to describe her unique experience.

Mixing journalism, science, and poetry, just as she had as a novice writer, Ackerman's unique vision has left fans and poets wanting more. Ackerman's first full-length book of poetry, The Planets: A Cosmic Pastoral (1976), is a celebration of astronomy and the earth. In this book, exploring comets, the landscape of space, and the solar system, Ackerman travels through the scenic route that is our universe, as she explores the Milky Way and the moon in verse. Ackerman questions the role of humans in this vast galaxy, and wonders in her poem entitled I Reveille:

How shall I celebrate the planet

That, even now, carries me in its fruited womb?

Ackerman achieves, through this demonstration, a sense of how closely compatible terrestrial exploration, poetry, science, and art are in reality. Ackerman aims to confer the deserved respect to earth, allowing humans to realize and pay tribute to how small we are in the grand scheme of things.

Ackerman has been admired as an accomplished observer of nature. This quiet and meticulous observance is evident in her work entitled The Moon by Whale Light, and Other Adventures among Bats, Penguins, Crocodilians, and Whales (1991), a collection of four essays adapted from articles previously published in The New Yorker. Michiko Kakutani of The New York Times offered such praise, writing that Ackerman "has a gift for sparkling, resonant language, and her descriptions of various animals and their habitats are alive with verbal energy and delight. She describes bats as delicately assembled packages of 'fur and appetite' and characterizes their high-pitched cries as 'vocal Braille.'"

Ackerman also uses nature to express the sensual side of love, which she explores in her many romantic poems. Ackerman's passion for life and the affirmation of love's power resound throughout her poetry. This passion can be seen in her 1994 collection of essays entitled A Natural History of Love (1994). Washington Post Book World contributor Barbara Raskin characterized this volume as "an audaciously brilliant romp...Using an evolutionary history as her launchpad, Ackerman takes off on a space flight in which she describes, defines, theorizes, analyzes, analogizes, apologizes, generalizes, explains, philosophizes, embellishes, codifies, classifies, confesses, compares, contrasts, speculates, hypothesizes and generally carries on like a hooligan about amatory love. It's a blast."

Ackerman has grown with her poems and is as diverse as her subject material. Through her vision, she has joined together the awkward pairings of science and poetry, while depicting, in her endearing manner, the passion and joyful exuberance for life, making Ackerman a unique and highly sought after poet of the twenty-first century. She has also contributed to the The New York Times and The New Yorker, and is the author of three children's book, including Animal Sense (2003), illustrated by Peter Sis. Her book The Human Age (2014) became a New York Times Best Seller and has received numerous recognitions, including the P.E.N. Henry David Thoreau Award.