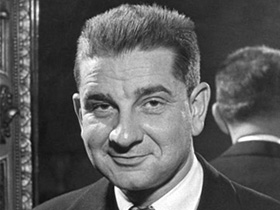 Famed cartoonist and creator of The Addams Family, Charles Addams attended the University of Pennsylvania.

Charles Addams was born on January 7, 1912, in Westfield, New Jersey, and later studied fine arts at the University of Pennsylvania for a time. He was the creator of The Addams Family and was known for his macabre cartoons and artwork. Addams was equally noted for his exotic life style and liaisons with women, many of whom were famous. Most of his work was published in The New Yorker. Addams died on September 29, 1988, in Manhattan, New York.

Charles Samuel Addams or "Chill" as his friends called him was born on January 7, 1912, in Westfield, New Jersey. The majority of Addams' childhood was spent in his house on Elm Street, which is now a local New Jersey landmark. As a child, Addams developed a love for horror. As neighbors recall, his favorite playground was the Presbyterian Cemetery. On one occasion, police caught him breaking into an abandoned Victorian house in his neighborhood. This house, as well as the one on Elm Street, strongly resembles the house in Charles Addams' most famous works, "The Addams Family" television series, cartoons, and movies.

Addams attended Westfield Public High School where he was the art editor of the school newspaper. He graduated in 1929, attended Colgate University for a year, and then transferred to the University of Pennsylvania to study the fine arts. Still undecided about his future, he transferred again to the Grand Central School of Art in New York City. Shortly thereafter, he decided that school wasn't for him and dropped out for good. His first meaningful job was in the Layout Department of True Detective magazine, where he retouched photographs of blood-splattered corpses to make them a little less gruesome. This is where Addams perfected his distinctive ink wash technique.

Addams' life-long dream was to be a cartoonist for The New Yorker, and he more than fulfilled his ambitions. His first drawing appeared in The New Yorker on February 6, 1932, but Addams did not get his big break until 1940. This was when the editor of The New Yorker, Harold Ross, came across his cartoon "The Downhill Skier." This featured tracks from a skier's skis that seemed to have passed around both sides of a tree at the same time, much to the bafflement of a fellow skier going in the opposite direction. Ross thought Addams' cartoons were hilarious and gave him a full-time position at the magazine. Ross even supplied Addams with ideas when he hit a dry spell. Addams' drawings appeared regularly in The New Yorker from 1939 until he died in 1988. He drew over 1,300 cartoons for the magazine, but will be remembered most as the creator of The Addams Family series. The first Addams Family cartoon appeared in the August 6, 1938, issue of The New Yorker. It depicted a curvaceous, dark-haired woman in a spidery black dress inside a dark, dilapidated Victorian house listening patiently to a vacuum salesman who was oblivious to the home's disrepair—cobwebs, bats, and broken balusters. More cartoons about the vamp, soon christened as Morticia, and her ghoulish family followed.

It was not until 1964 that The Addams Family gained true notoriety. This was when television producer David Levy asked Addams to write a situation comedy based on his characters. The ABC series only ran for two years—from 1964 to 1966—but has been in syndication ever since.

Addams' personal life was as intriguing as his art. In fact, he was known for his "wicked ways with women," and monogamy was not his strong suit. Addams and his first wife Barbara were married in 1943. Although he genuinely loved her, he did not love children and was often quoted saying, "I am my own child." His loathing of children ultimately led to divorce in 1951. Barbara did leave a lasting impression on him and served as the inspiration for the character, Morticia, in The Addams Family series. Addams married his second wife in 1954, who was also named Barbara. He referred to her as Barbara II, but his friends preferred to call her "Bad Barbara." She was a lawyer, who did not appreciate his philandering ways. She divorced him in 1956, while retaining most of his fortune plus the residual payments from his works. Addams married his third wife, Marilyn, in 1985. She accepted him in spite of his ongoing affairs and remained with him until his death. Throughout his life, Addams was known as a ladies' man and served as escort to such glamorous women as Jacqueline Kennedy, Joan Fontaine, and Greta Garbo.

Even though Addams was known for the macabre, he often stated that he wanted a happy death and he achieved just that on September 28, 1988. After visiting with fellow cartoonists in Connecticut, he drove his precious Audi 4000 to his home in Manhattan. He pulled into his driveway, suffered a massive heart attack, and died in his car.

Addams has left quite a legacy. A Charles Addams Art Scholarship was founded in 1991 and the first award was given in 1992. It is awarded annually to a Westfield High School student who intends to pursue education in the arts. In addition, the Westfield Historic Society declared Addams' boyhood home at 522 Elm Street to be an historic landmark. The New York Public Library at 42nd street and 5th Avenue hosts a permanent Charles Addams Gallery dedicated to displaying his artwork. The Charles Addams Museum in Westfield, New Jersey, opened in January 2002, on the 90th anniversary of Addams' birth, and The Addams Family has been adapted into a Broadway Musical, which toured across America, Rio De Janeiro, Brazil, and Sydney, Australia (2014); and into an animated film (2019). US theatre houses and high schools continue to produce the show across the country.