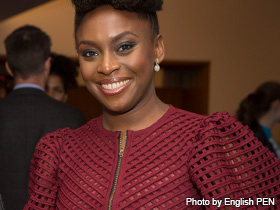 Chimamanda Ngozi Adichie is an award-winning author of novels, short stories, and nonfiction, including Americanah (2013), and a short story collection The Thing Around Your Neck (2009).

Chimamanda Ngozi Adichie was born on September 15, 1977, in Enugu, Nigeria. After pursuing a career in medicine for two years, Adichie moved to the United States to study Communications on a scholarship at Drexel University in Philadelphia. She went on to earn an undergraduate degree in Communications and Political Science from Eastern Connecticut University, an MA in Creative Writing from Johns Hopkins University, and an MA in African Studies from Yale University. In addition having numerous essays published in newspapers, journals, and magazines, Adichie is the author of multiple books, including the award-winning Americanah (2013), and the short story collection The Thing Around Your Neck (2009).

"I went to the US when I was eight," Chimamanda Ngozi Adichie tells Carl Wilkinson, of The Guardian. "My father was a professor teaching in California, so we spent the summer with him. I imagined I was going to a snow-filled place - to me overseas meant snow - and I was initially disappointed how similar San Diego was to my home town."

Adichie was born on September 15, 1977, in Enugu, Nigeria, to Igbo parents and grew up in Nsukka, the college town where her father, James Nwoye Adichie, taught statistics and later became Deputy Vice-Chancellor at the University of Nigeria. Grace Ifeoma Adichie, Adichie's mother, was the first female Registrar at the university. With six children total, the family lived in the house formerly occupied by the world-renowned, Nigerian writer Chinua Achebe.

"I am immensely proud of [my father's] intellect," she tells Per Contra writer Miriam N. Kotzin. "[B]ut I am even prouder of his gentleness and integrity. My mother is more outgoing, sociable, vivacious. She was the first female Registrar of the university and her dedication to her work inspired me, as did her refusal to be seen as any less competent than a male Registrar."

Inspired by the tales by Enid Blyton, an English children's book author, Adichie began mimicking the author's style with her own characters and handmade books from a young age. Reading works by African authors later (Achebe's Things Fall Apart, Camara Laye's The African Child) "changed everything," she tells Christina Patterson of The Independent. It was then she realized that black Africans "could actually exist" in books.

She explains to Patterson that in Nigeria, promising students are expected to pursue careers in medicine, law, or engineering. "It was just assumed I would be a doctor," she says. So she pursued a medical degree at the University of Nigeria for two years, but then earned a scholarship to study Communications at Drexel University in Philadelphia and moved to the United States at the age of nineteen.

After two years at Drexel, she earned a scholarship in Communications and Political Science from Eastern Connecticut University and moved to Connecticut, where she stayed with her sister, Ijeoma, who later began her own medical practice. During her senior year, Adichie began work on her first novel, Purple Hibiscus (2003). According to Peterson, "She would go to lectures in the morning, look after her nephew in the afternoon and write at night." While she was writing what was to become the Commonwealth Writers' Best First Book Prize-winner of 2005, Adichie was "very homesick," she tells CNN News reporter, Zain Verjee. "I was in the US. Suddenly I was romanticizing the hibiscus in our front yard. I wrote this book, really about missing home, nostalgia." Purple Hibiscus was also later shortlisted for the Orange Prize in 2004, among other acknowledgements.

"I knew I was writing about this very intense, contested history, and I did so much research," Adichie says of Half of a Yellow Sun, a novel exploring the impacts of the Biafran War. "And I cried a lot when I was writing it. My grandfathers died in Baifra, and here I was kind of mining the pain of my family."

Adichie completed a Princeton University Hodder Fellowship the academic year of 2005-2006 and later earned her MA in African Studies from Yale University in 2008. When asked by Wilkinson of The Guardian what she loves about Nigeria, she says, "I love the people. I love the average Nigerian. I love the sense of can-do in the face of all sorts of horrors. I love the languages. ...There's a casual acceptance and friendliness that you don't see outside Nigeria. You can walk into a shop and people will laugh and joke with you as if they knew you."

Her short story collection, The Thing Around Your Neck, was published in 2009 and nominated for four literary awards, including as a runner-up for the 2010 Dayton Literary Peace Prize. "Fiction writing for me makes me happy," Adichie tells Verjee. "When it's going well it's like a high." In contrast to Half of a Yellow Sun, she says of her most recent novel, Americanah (2013), which follows a Nigerian immigrant in the US on a journey back to her homeland, that she "laughed a lot writing it."

Americanah won the Chicago Tribune Heartland Prize for fiction, the National Book Critics Circle Award for fiction, and was listed among the "Ten Best Books" by the New York Times Book Review and the "Top Ten Books" by the British Broadcasting Corporation (BBC) all in 2013. The book was also selected for the 2014 Penn State Reads program, which facilitates a shared experience among first-year students at the Pennsylvania State University, according to Penn State News writer Heather Hottle.

Adichie has also received praise for her TED talks, "The danger of a single story" and "We should all be feminists." She shares with Miriam N. Kotzin of Per Contra her views on social issues in relation to her writing: "I am not interested in the grand schemes of politics, I am interested in how government corruption trickles down to mean that old men die away slowly because they are not paid their pensions and how petrol is so expensive that people cancel trips to their ancestral hometowns, and how women decide to marry men they dislike because they cannot find jobs and how our values are being shaped and changed by our economy."

At the time of this writing, Chimamanda Ngozi Adichie is married and divides her time between Nigeria and the United States. "I didn't think of myself as black until I left Nigeria," she tells Wilkinson. "I think you travel to search and come back home to find yourself there. In many ways travel becomes the process of finding." She is the recipient of many awards and distinctions, including a MacArthur Foundation Fellowship (2008) and a Radcliffe Institute for Advanced Study from Harvard University (2011). Of her continued writing endeavors she says, "I don't have a process. I sit at my desk and hope it happens."