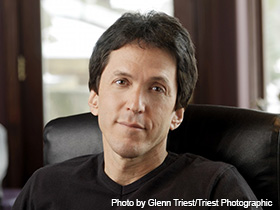 Sports journalist and author of the bestseller Tuesdays with Morrie (1997), Mitch Albom attended high school in Philadelphia and contributed to The Philadelphia Inquirer for a time.

Mitch Albom was born in Passaic, New Jersey, in 1958. He attended high school in Philadelphia for a time and is a graduate of Brandeis University and Columbia University. Albom was a contributing writer for The Philadelphia Inquirer from 1982-1983. He has garnered awards in the radio and television industries and is the bestselling author of Tuesdays With Morrie (1997), an inspirational book about a friendship renewed with his college mentor.

Mitch Albom is the son of Ira and Rhoda Albom and was born on May 23, 1958, in Passaic, New Jersey. After receiving a BA in Sociology from Brandeis University, Albom, then attended Columbia University and received an MJ and an MBA.

After this thorough schooling he decided to enter the field of journalism. He wrote for the Queens Tribune, The Philadelphia Inquirer, and The Fort Lauderdale News and Sun Sentinel from 1981-1985. Experience in these markets seasoned the young writer for when he arrived in Detroit in 1985 and his career took flight.

At the time of this writing, Albom continues to be a journalist for the Detroit Free Press, and many of his columns have been collected into books, including Live Albom I (1988), Live Albom II (1990), Live Albom III (1992), and Live Albom IV (1995). Extremely successful in print, his columns are now nationally syndicated. He joined the staff of the rock station WLLZ in 1985 to serve as the sports director. Then in 1988 he began a weekly radio program, The Sunday Sports Albom, a call-in show that featured local and national sports stars. The show afforded Albom the opportunity to expand his horizons in the radio media. He became a nationally syndicated radio host over the ABC affiliate WJR-760-AM with The Mitch Albom Show, and has also hosted The Mitch Albom Show on weekends and The Monday Sports Albom. In 1989 Albom collaborated on a book with longtime acquaintance Bo Schembechler, the former college football coach from the University of Michigan. The book Bo: The Bo Schembechler Story (1989) casts the man's life as a model for self-respect and tough love. It also provides the collegiate sports arena an example of persistence in action, players who graduate, and a violation-free sports program. In the years after the publication of Bo, Albom won awards from the Associated Press and the United Press International. Most notably, he was named the number one US sports columnist by the AP Sports Editors twelve times. He also won awards from the National Association of Sportswriters and Broadcasters, and in 1989 won the National Headliners award as the number two outstanding writer. Fab Five (1993), a book written to describe the University of Michigan's basketball team, was published in 1993. The book focuses on the extraordinary odds of the team having five freshman starters.

Albom's dynamic personality led him in 1995 to become a panelist on ESPN's program Sports Reporters. This led to many other television appearances, chiefly on The Oprah Winfrey Show, The Today Show; CBS's The Early Show, Larry King Live, The Tom Snyder Show, and The Rosie O'Donnell Show.

With material success, introspection began to creep into Albom's life. While watching ABC's Nightline, Albom realized the great influence that Morrie Schwartz, a former college professor, had had on him. When Schwartz was diagnosed with Lou Gehrig's disease, Albom rushed to Massachusetts to tend to his elderly mentor. These visits led to the writing of Tuesdays with Morrie (1997). The book became a bestseller and led Albom from the sports world to the more explicit, challenging topics of wisdom, disease, and spirituality. In 2003, Albom published his first novel, The Five People You Meet In Heaven (2003), which champions the value of love, sacrifice, and human life. These are topics that Albom continually faces and debates in his nationally syndicated newspaper columns and radio programs. His novels, For One More Day (2006) and Have a Little Faith (2009) have been on The New York Times Best Sellers list and Opera's best nonfiction book choice of 2009.His 2012 book, The Magic Strings of Frankie Presto, is an exploration of modern music through the eyes of a guitar player and has an accompanying soundtrack, released in 2015, featuring various artists, including Ingrid Michaelson, Kiss, and the author himself. Tuesday's with Morrie, The Five People You Meet in Heaven, and For One More Day were also adapted into movies, which Albom contributed to by writing screenplays.

He has also written the plays Ernie (2011), And the Winner Is (2005), Tuesdays with Morrie (with Jeffery Hatcher) (2002), and Duck Hunter Shoots Angel (2004); and kicked off his directorial debut with the two-episode short film, Leslie, which aired on the WIGS YouTube Channel in 2012.

In 2013, Albom published the novel The Time Keeper, about the first man to take on the task of counting time. Following that came his novel, The First Phone Call from Heaven, winner of a 2014 Religion Communicators Council Wilbur Award and described as [a] beautifully rendered tale of faith and redemption, by bestselling author, Garth Stein.

At the time of this writing, Mitch Albom resides in Detroit, Michigan, with his wife, Janine, and continues to work for the five charities he has founded.