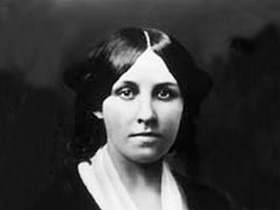 Famed author of Little Women Louisa May Alcott was born in Germantown.

Louisa May Alcott was born in Germantown, Pennsylvania, in 1832. She soon moved to New England, where she lived for the remainder of her life. Alcott was an active feminist and abolitionist. She worked as a teacher when she could, but spent most of her time writing. She published many short stories in various periodicals and numerous novels, her most famous work being the 1868 Little Women, a chronicle of the lives of the March sisters. Her main character, Jo March, was based on Alcott's own life. In 1879, she became the first woman to register to vote in Concord, Massachusetts. Alcott never married and died in 1888.

Louisa May Alcott was born in a boarding house in Germantown, Pennsylvania (now part of Philadelphia), on November 29, 1832. Alcott's mother, Abigail May, was a strong Christian and a women's rights activist. Abigail had numerous miscarriages and stillborns and often felt lonely and distressed, due to lack of attention and help from her husband. In addition to the women's rights movement, she was also involved in the movement to abolish slavery, two movements in which Alcott would later become active as well. Alcott's father, Amos Bronson Alcott, was a social reformer, philosopher, teacher, and member of the Transcendentalist Club. Alcott was one of four daughters. She and her older sister, Anna, moved to Boston with their parents in 1834 where her father established the controversial and experimental Temple School. Alcott's younger sisters, Elizabeth and Abby May, were born shortly after in 1835 and 1840, respectively.

Though Amos Alcott spent a lot of time away from his family and offered little support to this wife and children in the early years, he had an influential role in the education of his children; for them, Amos Alcott instilled the values of self-sacrifice and individuality. Louisa and her older sister Anna regularly attended the Temple School with their father and put on plays under the direction of their parents. Alcott, a tomboy, showed exceptional intelligence from a young age and had a vast vocabulary at the age of three. Because of diminishing enrollment in the Temple School and financial problems, the Alcott family moved from Boston to Concord, Massachusetts in 1840, about one mile from Ralph Waldo Emerson, a family friend.

Through the teachings and relations of her father, Alcott was exposed to many transcendentalist ideals and even received some instruction from Emerson, whose library she occasionally visited, and Henry David Thoreau, with whom she took nature walks. She was also influenced by Nathaniel Hawthorne and Margaret Fuller, a romantic reformer and feminist who would become Alcott's life long heroine.

In 1843, the Alcott family, along with Charles Lane and Henry Right, moved to the utopian community "Fruitlands" in Wyman Farm in Harvard. On this communal farm, Alcott's passion for writing truly began to blossom, even though she had already written her first poem at age eight. She began to write poems and stories that she acted out with her sisters and also began keeping a journal. This journal would later be published well after her death as Transcendental Wild Oats and Excerpts from the Fruitlands Diary in 1975. After a failed experience at Fruitlands, the Alcotts moved back to Concord where they purchased the Cogswell House with the help of Ralph Waldo Emerson and the inheritance of Alcott's mother.

By the age of 15, Alcott began working wherever she could in order to help her poverty-plagued family. She found work as a teacher, a seamstress, a governess, and even as a household servant. At this age, in 1848, she also wrote "The Rival Painters" which would later become her first published story under her own name in 1852 when it was printed in the Olive Branch. She published her first poem, "Sunlight," in Peterson's Magazine the previous year under the pseudonym Flora Fairchild. Her next publication would come in 1854 in the Saturday Evening Gazette with her short story "The Rival Prima Donnas." Later that year would be the publication of her first book, Flower Fables, a collection of fairy tales that she dedicated to Ellen Emerson.

In 1858, the Alcotts moved into Orchard House, now a museum and historic landmark, where Alcott would eventually write and set her most popular work: Little Women. Alcott would spend the rest of her years in different residences throughout New England, mostly in Boston and Concord. Also in 1858, Alcott lost her younger sister Elizabeth to scarlet fever and her older sister Anna announced her engagement. Anna married in 1860, the same year that Alcott began writing for The Atlantic Monthly. The following year, while she began working on her novel "Success" (later re-titled Work) and editing Moods, the American Civil War broke out. Wanting to aid in the Union's effort, Alcott took a nursing position in Georgetown, Washington, DC. A collection of Alcott's letters to home during her time as a Civil War nurse entitled Hospital Sketches was published in The Commonwealth, a Boston anti-slavery newspaper. The collection was published as a book in August of 1863. It was the first time she was recognized for her observations and humor.

Though Alcott was most devoted to her writing, she continued to work as a teacher as often as she could. Many of her short stories appeared in Frank Leslie's Illustrated Newspaper throughout the years including "Pauline's Passion and Punishment" (which was written under the pseudonym A.M. Barnard), "The Fate of Forests," and "The Freak of Genius." Some of her short stories also appeared in publications such as The Flag of Our Union, St. Nicholas, and The Christian Union. In 1865, Alcott traveled to Europe and spent nearly a year traveling the continent. In 1866, her novel Moods was published in England, a full two years after its publication in the United States. After spending some time writing upon her return to the United States, Alcott was asked by her publisher, Roberts Brothers, to write a girls' book. She was also asked to edit Merry's Museum. The next two years led to the publication of Little Women in two volumes, Part One in 1868 and Part Two in 1869. Little Women, which centered on the childhood of the March sisters, would quickly become Alcott's most renowned work. Her character Jo March was based on Alcott's own life, though Jo married and Alcott never would. Little Men (1982) and its sequel Jo's Boys (1886) were the last novels to cover the lives of the March family.

Alcott continued to write and publish many more works, such as Work (which was finally published in 1872 and loosely based on Alcott's life), An Old-Fashioned Girl (1870), Aunt Jo's Scrap Bag (published in six volumes between 1871 and 1879), Eight Cousins and its sequel Rose in Bloom (1876), Lulu's Library (1885), and many others. Most of her later works were for children. With the exceptions of Work and Modern Mephistopheles for the No Name Series in 1877, she did not write anymore works for adults. Many of her main characters were semi-autobiographical girls who were individuals rather than the idealized stereotype that was popular in many of the period novels.

Abigail May, Alcott's mother, died in 1877. In 1878, Alcott's younger sister May, with whom she had become increasingly close after the marriage of one sister and the death of the other, married. Alcott's sister had a daughter in 1879 and named her daughter Louisa Marie, "Lulu," after Alcott. One month after Lulu's birth, May passed away in Paris, leaving her daughter to Alcott's care. The same year Alcott became the first woman to register to vote in Concord.

In 1886, Alcott moved into a nursing home in Dunreath Place in Roxbury, Massachusetts. She continued to write while in the home and visited her father on his deathbed on March 4, 1888. Alcott died two days after him on March 6, 1888. On March 8, she was buried in Sleepy Hollow Cemetery in Concord, Massachusetts. In all, Alcott published more than 300 works in various literary genres. Most of her works were serial publications, as was common for her time.

In 1988, a century after Alcott's death, an unpublished Alcott manuscript was found in Harvard's library by two scholars. Inside of the handwritten journal, Alcott indicated that it was written when she was just seventeen years old and that it was her first novel. The novel, The Inheritance, was published in 1997. Another heretofore unknown manuscript, a racy tale comparable to romance novels of the current day, was published in 1995 under the title A Long Fatal Love Chase.