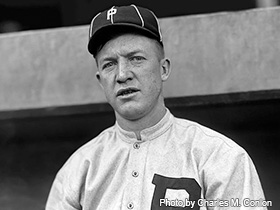 Phillies pitcher Grover Cleveland Alexander was an inaugural member of the Baseball Hall of Fame.

Born in 1887, Grover Cleveland Alexander, known as Pete, is remembered as one of the best pitchers in professional baseball history. His career in Major League Baseball began with the Philadelphia Phillies, which is where he eventually ended his career. In between, Alexander was traded to the Chicago Cubs and then again to the St. Louis Cardinals. During his 20-year career, Alexander earned 373 wins, three Triple Crown awards, and his 90 shutouts are a National League record. He was inducted into the National Baseball Hall of Fame in 1938 and died in 1950.

Grover Cleveland "Pete" Alexander was born February 26, 1887, in St. Paul, Nebraska. Alexander was raised in a family of 13 children, eleven of whom were boys, all born to the late Margaret Cootey and William Alexander. Named by his parents after the current president of that time, President Grover Cleveland, he went by the nickname "Dode," to all of his family members. He spent his childhood living in a small agricultural community, shucking corn which his father believed gave him the powerful right wrist that made his curveball so revered. During his youth on the farm, he enjoyed hunting birds with stones, displaying his natural abilities of accuracy and speed. Before going on to play baseball, Alexander was just an ordinary boy, graduating from St. Paul High School with the world at his feet.

Alexander started his baseball career early playing for a semi-professional team at the age of 20 in Central City, Nebraska. He began working for a mere $50 a month once he signed the season's contract in 1907. However, his historic career truly began while tossing baseballs at a county fair in Butwell, Nebraska. Here, Alexander was discovered by the Galesburg Club and signed to play in the Illinois-Missouri baseball league.

In his first season with the Galesburg Club, Alexander was a star player, highlighting his natural talent and standing out from the rest of the competition. As a rookie, Alexander struck out 198 batters and only walked 42, leading his team with a 15-8 winning season record. Although he had a fine first season, he had a negative life changing experience when he was hit in the skull by a stray ball. After being knocked unconscious for 56 hours before finally recovering, he was temporarily injured and diagnosed with debilitating double vision that would seriously hinder his pitching abilities. This unfortunate mishap caused Alexander the unpredictable epilepsy attacks in his future that ultimately ended his career. Upon hearing this news, Galesburg quickly sold Alexander to Indianapolis, where he only remained for a short period before again be traded to Syracuse in the New York State League.

Shortly after Alexander's career seemed to have been going nowhere, Galesburg and Indianapolis realized their mistake and forever regretted letting the enormous talent slip away. Just before the 1910 baseball season, Alexander's double vision diminished, making him more determined than ever and aided his overall performance. His strong and durable right arm led Syracuse to 29 victories out of his 43 games pitching, thereafter alerting professional baseball scouts to recruit Alexander to play for their team.

Eventually, he was sold by Syracuse to the Philadelphia Phillies in the Major Leagues for $750. His salary as a starting pitcher was $250 a month, one of the finest deals the Phillies ever made. His 1911 season as a rookie was the best ever recorded in hurling history. Alexander's debut began with 28 wins, leading the National League, and only losing 13. His 28 wins still stand today as a rookie record. In his first season, he successfully completed 31 games, with seven shutouts. Pitching in 367 innings, Alexander finished second in strikeouts and fourth in ERA.

Alexander proved to be a dominant player during his first few seasons of work. During six of his seven seasons pitching for the "Fightin' Phils," Alexander, was responsible for leading the league in innings pitched. In 1915, 1916, and 1917, he won 31, 33, and 30 games respectively. This stretch is recognized as one of the best ever recorded in major league pitching. He also prevailed with five strikeout titles and his 16 shutouts in 1916 stands as another major league record today.

In 1915, Alexander pitched four one-hitters and on September 23, 1916, and September 3, 1917, he threw two complete games in a doubleheader. Those amazed by his strength and persistence as a pitcher said of him that, "his arm never seemed to tire." His 1915 season for the Phils will remain in history as the staple of Alexander's career, where he led his team to the National League pennant with a 31-10 record, defeating the Red Sox. This victory remained the Phillies' only World Series win again until 1980. His consistent successful seasons earned Alexander pitching's Triple Crown in 1915 and 1916.

Fearing that Alexander would be lost to the draft for World War I, the Phils traded their 190 game-winning pitcher to the Chicago Cubs in 1917. Paying Philadelphia $60,000, Chicago bargained to gain possession of their "ace." This deal is often called one of the worst deals ever made in team history. Unfortunately, Alexander was drafted and spent most of the 1918 season as an artillery officer in France. Before leaving, Alexander married Amy Marie Arrants of Omaha on May 31, who he previously met on a blind date years before in St. Paul. They were to marry three times in their lifetime after divorcing twice in Amy's attempts to make him realize he needed to give up alcohol. World War I cost Alexander him mentally and physically, driving him to drink even more heavily after suffering from shell shock, partial hearing loss and increasingly worse epileptic seizures.

Although he did not return to the States the same way he departed, Alexander still gave Chicago everything he had left. He gave Chicago several successful years after his arrival back into baseball in 1919, winning another Triple Crown in 1920 for his win, earned run average (ERA), and strikeout stats. His ERA title was his fifth consecutive honor, disregarding the 1918 season interrupted by war. Finally in 1921, his habitual drinking began negatively affecting his performance, forcing the Cubs to trade him to the Cardinals mid-season of 1926.

Alexander made his June 27, 1926, debut with the Cardinals, his third major league team, defeating his previous team the Cubs. In an emotionally upsetting 3-2 victory, he only permitted four hits to his old friends and ex-teammates. His move to St. Louis proved to be one of the most dramatic moments in baseball history when Alexander competed against two of the most respected major league heavy hitters of all time, Babe Ruth and Lou Gehrig. In a suspenseful seven game finale, with the help of Alexander's relentless right arm shining in games two and six, the Cardinals beat the Yankees in the 1926 World Series.

The Cardinals returned in 1928 to battle the Yankees for a repeat performance in the World Series, only to fall this time. After winning 16 games for the pennant-holding Cards, Alexander pitched in his very last World Series and his team was swept by the New York Yankees. His continued alcoholism caused him to both professionally and personally fade into baseball's past. For a brief period of time, Alexander was sold back to the Philadelphia Phillies in 1930. Once again they thought they had their ace, but Alexander was unable to win a game in nine pitching efforts. Philadelphia released him, and he played his final baseball games with Dallas in the Texas League before retiring.

The end of Alexander's career is far from glorious and his days after standing in the spotlight recognized as one of baseball's finest are somber. The disease stricken alcoholic that Alexander became in his final days, died of suspected cardiac arrest on November 4, 1950, at the age of 63. He was found alone and broke in a rented hotel room in his hometown, far from the heroic expectations imagined, a few days before a planned visit with his wife. He is interned with full military honors and buried at Elmwood Cemetery, outside of St. Paul, Nebraska.

Alexander's Hall of Fame plaque reads, "Greatest National League pitcher for two decades with Phillies, Cubs and Cardinals starting in 1911. Won 1926 World Championship for Cardinals by striking out Tony Lazzeri with bases full in final crisis at Yankee Stadium." This is remembered as a glittering moment in his career in which he was quoted as saying "Less than a foot made the difference between a hero and a bum."

He has forever left an impression on America's favorite pastime. During his 20-year career, Alexander compiled 373 wins, 208 losses, and his 90 earned shutouts are a National League record. His career ERA was 2.56, walking 953 batters and striking out 2,199. Alexander was still alive upon witnessing his election into the National Baseball Hall of Fame in 1938. Most recently, "Old Pete," was ranked 12th on the Sporting News list of the 100 Greatest Baseball Players ever and nominated for the Major League Baseball's All-Century team.

The Winning Team, a movie made of Alexander's life was released in 1952, two years after his death. Ronald Reagan played the starring role of Alexander and Doris Day portrayed his wife, Amy. The widowed Mrs. Alexander served as a consultant for the making of the film by accurately depicting her husband's personality and image in his absence. Alexander lives in the minds of family, friends, and fans as more than a legendary baseball player, but a determined and vibrant man. As Bill Klem said about Alexander, "He is one player in our league who could win the pennant for any of the seven teams that were not in first place," a true display of his relentless and renowned talent.