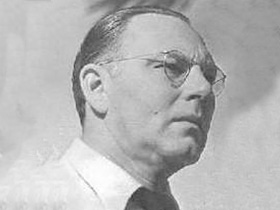 Hervey Allen was born on December 8, 1889, in Pittsburgh. He spent his childhood in the city, then left to enroll in the United States Naval Academy. He was discharged and returned to Pittsburgh due to an injury. Allen then studied at the University of Pittsburgh and served in the Pennsylvanian National Guard, where he saw service on the Mexican border and in France during World War I. During his service, he wrote poetry and eventually published a novel, Anthony Adverse. Allen continued writing until he passed away in Coconut Grove, Florida in 1949. Anthony Adverse is credited with renewing public interest in the historical fiction genre.

William Hervey Allen Jr. was born in Pittsburgh, Pennsylvania on December 8, 1889, to Helen Ebey Myers and Hervey Allen Sr., an entrepreneur and inventor. Allen was one of five children. His grandfather, Edward Jay Allen, served as an officer in the Union Army during the Civil War. He was also an influential figure in Pittsburgh’s history and in Allen’s early life. Edward Jay Allen was the secretary for the Kansas Aid Society of Western Pennsylvania, the goal of which was to help make Kansas a free state. Once war broke out, Edward Allen raised the fifty-fifth Regiment of Pennsylvanian Volunteers, which he led as a Colonel through the battle of Fredericksburg. After the war came to an end, Edward Allen was a real estate appraiser in Pittsburgh and helped organize the Pacific and Atlantic Telegraph Company. Along the way, he befriended prominent Pittsburghers, including Stephen Foster, John W. Alexander, Andrew Carnegie, George Westinghouse, and Andrew Mellon.

William Hervey Allen spent most of his childhood with his famous grandfather. He attended school at Shady Side Academy, a boy’s prep school, and graduated in 1906. While a teenager, Allen was a member of the Hiland Cadets and kept records of his involvement with the group.

In 1908, Allen left Pittsburgh for Annapolis to study at Werntz cram school to prepare himself to enter the U.S. Naval Academy. Werntz was designed to help students get into programs that they may have lacked the academic knowledge or credentials for. Allen successfully entered the Academy in 1909 as a midshipman but was discharged in 1910 when he suffered a track and field injury. Returning to Pittsburgh, he worked for the Bell Telephone Company and later enrolled in the University of Pittsburgh.. He graduated with honors in 1915 with a Bachelor of Science in Economics and a specialty in Literature.

Allen then joined the 18th regiment of the Pennsylvanian National Guard “Duquesne Greys” and became a Second Lieutenant in 1916. His regiment was sent to the Mexican border during the American intervention in Vera Cruz, where he wrote and published his first collection of poetry, Ballads of the Border. This volume of poetry found local fame in El Paso, Texas.

Upon returning to Pittsburgh, Allen was called to serve in World War I and was promoted to  First Lieutenant of the 111th American Expeditionary Force. Allen’s regiment was initially tasked with guarding Pennsylvanian railroads. He was later sent to Europe in 1918 and saw fighting between the Marne and Vasle in France. He eventually was promoted to Commander of Company B of the 28th Pennsylvania Division. During his time away from the front, he taught English to French soldiers. Throughout his service, he kept a diary of his experiences and used it to create his poetry and future novels.

Many veterans of World War I who returned home were disillusioned with modern civilization and sought new ideas for social change in their home countries. Allen found his answer in Thomas Jefferson’s ideal of individualism. This belief led Allen to abandon the ideas of progressivism and pragmatism. His shift in thought greatly influenced his writing and led him to start writing about the history of America.

After the war, Allen took classes at Harvard and spent some time teaching English at the University of Pittsburgh. Eventually leaving to teach high school in Charleston, South Carolina, he founded the Poetry Society of South Carolina. In 1921, he published his second poetry collection, Wampum and Old Gold, and was recognized by the Yale Series of Young Poets, an organization that recognized promising American poets. In 1925, Allen moved to New York to teach at Columbia University and Vassar College. While there, he met Annette (Ann) Andrew, whom he married in 1927. The couple eventually moved to Florida because of Allen’s fondness for the Everglades. They kept a residence in Dade County (now Miami-Dade County) that was known as the Glades Estate.

While Allen’s next works were not as well-received as Anthony Adverse, he turned his attention to writing about Thomas Jefferson’s ideals in an uncompleted series called "The Disinherited." In it, Allen attempted to explain American history while proclaiming the individualistic and social justice ideals that he believed America was founded on.

In 1943, while writing the "Disinherited," Allen served as co-editor for Farrar & Rinehart’s Rivers of America Series. Also in 1943, Theodore Roosevelt appointed him as a Regional Information Representative in Atlanta, Georgia, for the War Manpower Commission. Allen was only able to finish three of five volumes of his planned series before passing away in 1949, just weeks before his 60th birthday, of a heart attack. Surviving Allen were his widow, and three children, Marcia Andrews, Mary Ann Allen, and Richard Francis Allen.