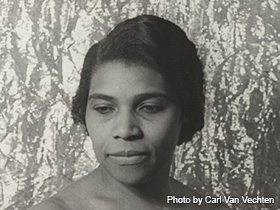 As an African-American, Marian Anderson often faced adversity over the course of her famous career as a contralto. Her autobiography, My Lord, What a Morning (1956), details the racism she encountered during her lifetime.

Born in South Philadelphia on February 27, 1897, Marian Anderson was an opera singer known for breaking though racial barriers. She performed at various venues over the course of her life, including Carnegie Hall, Constitution Hall, the Lincoln Memorial, and President Kennedy's inauguration. She also served as a goodwill ambassador to the United Nations, won a Grammy for lifetime achievement, and wrote an autobiography‚ My Lord, What a Morning (1956)‚ which was also turned into a play. She passed away in Portland, Oregon on April 8, 1993, from congestive heart failure.

Marian Anderson was born on February 27, 1897, in South Philadelphia. There has been some discrepancy over this date of birth—some sources have it listed as February 17, 1902—but when her birth certificate was released after her death, the former date was verified. Her father John worked as a coal and ice salesman, and her mother Anna was a former teacher. She lived in Philadelphia with her parents and her two sisters in a single rented room. She started singing in the choir of the Union Baptist Church at the age of six and impressed her neighbors so much over the years that they raised money for her to take private singing lessons. Anderson then studied at the Chicago Conservatory of Music in the summer of 1919 and graduated from the Philadelphia High School for Girls in 1921. She won a contest in New York in 1925, which allowed her to sing at Lewisohn Stadium, and this performance marked the beginning of a long and successful career.

On December 30, 1928, she debuted at Carnegie Hall. Several years later she left for a European tour, performing in cities such as Berlin and Paris, which helped cement her reputation as a great opera singer. Upon returning to the U.S., she gave 70 recitals in 1938, one of the most extensive tours in concert history.

One of the defining moments of Anderson's career was actually a performance that never happened. In 1939, Howard University wanted her to perform at Constitution Hall; however, the Daughters of the American Revolution (DAR), who owned the hall, would not permit Anderson to perform because she was black. Eleanor Roosevelt, a member of the DAR at the time of the incident, resigned in protest over this decision. Instead, Roosevelt arranged for Anderson to perform at the Lincoln Memorial on Easter Sunday. The April 9th concert brought 75,000 listeners to the mall, and many others listened on the radio. Four years later, the DAR invited Anderson to perform in a concert for China relief at Constitution Hall, and she accepted.

Anderson married Orpheus Fisher, an architect whom she had met while still in her teens, in 1943. In 1956, Anderson's autobiography,My Lord, What a Morning (1956), was published.

Over the next 25 years, she traveled the world, performing in over 14 countries. Anderson was appointed a goodwill ambassador to the United Nations by President Eisenhower, and she sang at President Kennedy's inauguration. In 1963, she received the Presidential Medal of Freedom from Kennedy. She began her farewell tour in 1964 and ended it with a performance at Carnegie Hall on Easter Sunday in 1965.

Following her retirement, she moved with her husband to a 155-acre farm in Connecticut. She received the UN Peace Prize in 1977, the Kennedy Center Honors Lifetime Achievement award in 1978, The Eleanor Roosevelt Human Rights Award in 1984, and a Grammy Award for Lifetime Achievement in 1991. She was also commemorated with a star on the Hollywood Walk of Fame at 6262 Hollywood Boulevard. She moved to Portland, Oregon to live with her nephew in 1992. She died of congestive heart failure on April 8, 1993.