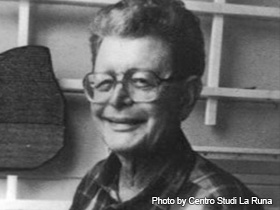 Poul William Anderson, a well-known and prolific author, was named a Grand Master of the Science Fiction and Fantasy Writers of America in 1978, 1997 and 1998.

Prolific science fiction author Poul Anderson was born in Bristol, Pennsylvania, on November 25, 1926. He began his writing career with the story "Tomorrow's Children" in 1947 and continued writing at a tremendous pace, completing over 80 novels. Anderson received every major award the science fiction genre had to offer before his death in 2001.

Poul Anderson was born on November 25, 1926, in Bristol, Pennsylvania. His parents were Anton William and Astrid Anderson. In 1953, Anderson married Karen J.M. Kruse, with whom he had a daughter named Astrid May.

Many believe Anderson's career started to take off after the publication of The High Crusade(1960). Anderson published a string of novels that began to gain him notoriety in the world of science fiction. In 1959, Anderson received the First Annual Cock Robin Mystery Award for his novel Perish by the Sword(1959). His most renowned novel came 11 years later when Tau Zero(1970), a simplistic story about a space ship steadily gaining speed and the complications on the ship, was published. Anderson wrote 86 books in his career.

Anderson received several awards during his career including seven Hugo Awards by the World Science Fiction Society for best short fiction and three Nebula Awards by the Science Fiction Writers' Association for excellence. Other awards included the First Annual Cock Robin Mystery Award, the August Derleth Award from the British Fantasy Society, Mythopoeic Award, J.R.R. Tolkien Memorial Award, Gandalf Award, and Grand Master of Fantasy. In 2001, he received the John W. Campbell Memorial Award for the best science fiction novel of the year for Genesis(2000). He was also a founding member of the Society for Creative Anachronism, a society devoted to the researching and re-creating of arts and skills of pre-seventeenth-century Europe. His book Going for Infinity was posthumously published in 2002. In 2009, he posthumously won the Hall of Fame Award for the Libertarian Futurist Society for his work No Truce with Kings (1964).

Poul Anderson passed away July 31, 2001, in his Orinda, California, home after a yearlong battle with prostate cancer. He was 74-years-old.