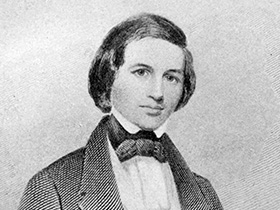 Poet and playwright T. S. Arthur is best known for his temperance novel Ten Nights in a Bar-Room (1854).

T. S. Arthur was born on June 6, 1809, in Orange County, New York, and he was the son of William Arthur and Anna Shay. When Arthur was 13-years-old, he left school and decided to work in a mill. Later, he became editor of the Baltimore Athenaeum and Young Men's Paper and founded the Baltimore Literary Monument. In 1854, Arthur wrote the largest selling temperance book of the period titled Ten Nights in a Bar-Room and What I Saw There. Arthur died on March 6, 1885, in Philadelphia, Pennsylvania.

Timothy Shay (T. S.) Arthur was born on June 6, 1809, on a farm in Orange County, New York, the second of four sons and a daughter of William Arthur and Anna Shay. He married Eliza Alden in 1836, and the couple had seven children.

Arthur was named after his grandfather, Timothy Shay, who was an officer in the Revolutionary War. Arthur's father, William, was a laborer; his parents were not able to provide Arthur with an education, so he depended on self-teaching, Bible readings, and religious lessons at home. Arthur and his family moved to Baltimore, Maryland, in 1817, where Arthur attended school. His teacher thought Arthur was "incapable of grasping fundamental skills." After a couple years of ineffective instruction, his teacher told Arthur's father to not waste his money by putting his son in school. At age 13, Arthur left school and decided to work in a mill. When he was 15-years-old, he worked as an apprentice for a tailor, but his poor eyesight forced him to quit that job five years later.

In 1833, he worked with the Susquehanna Bridge and Banking Company, and after quitting that job, Arthur became a journalist in Baltimore, where he wrote about several social causes including temperance, feminism, and socialism. That same year, Arthur became editor of the Baltimore Athenaeum and Young Men's Paper, a weekly literary publication that Arthur launched. The publication only lasted for three years. In addition to his duties as editor, Arthur wrote short stories and poetry.

Arthur founded the Baltimore Literary Monument in 1836, which was considered a respected literary periodical, and he also published his first book, The Young Wife's Book: A Manual of Moral, Religious and Domestic Duties. The next year, he wrote tales in Godey's Lady's Book, which published more than 60 of Arthur's works. He also obtained the Baltimore Saturday Visiter that year. Arthur stopped publishing the Literary Monument in 1839 and the Saturday Visiter in 1840. He then accepted an editorial position at the Boston Merchant.

Arthur became a member of the Washington Temperance Society in 1840 due to an interest in the temperance movement, one of the big reform movements of the nineteenth century. A year later, Arthur moved to Philadelphia, Pennsylvania, with his wife and children. He wrote a collection of stories inspired by the temperance movement called Six Nights with the Washingtonians: A Series of Original Temperance Tales in 1842. According to J.B. Dobkin, this collection "established Arthur's reputation as a literary crusader against the evil of strong drink, a theme that pervaded much of his literary output for the remainder of his career."

In 1850, Arthur started a weekly magazine called Arthur's Home Gazette. In 1853, the publication became a monthly and changed its name to Arthur's Home Magazine. The magazine was not as popular as other magazines and only had a circulation of 30,000 maximum, but "it represented an excellent example of the smaller women's publications that were produced in the mid to late nineteenth century. It also illustrated how Arthur was able to translate a highly successful literary formula into an editing philosophy that appealed to middle-class nineteenth-century women."

In 1854, Arthur wrote the largest selling temperance book of the period, titled Ten Nights in a Bar-Room and What I Saw There. The book focuses on the consequences of drinking and is about protagonist, Sam Slade, who decides to open a tavern. As a result, his daughter is killed in an accident, his wife is driven mad, and Sam is killed by his own son. According to an 1854 review by the New Haven Palladium in New England, "it is sufficient recommendation of this little volume to say that it is from the graphic pen of T. S. Arthur, whose work will be read and reread long after he has passed away. He is as true to nature, as far as he attempts to explore it, as Shakespeare himself, and all his works, consequently, have an immense popularity. The best of all is that his writings tend to make men better as well as wiser."

Arthur began a periodical called the Children's Hour in 1867 for St. Nicholas' Magazine. In 1869, he added Workingman, which was for the middle-working class. The periodical was intended "to furnish good reading for mechanics and their families" and to offset "the ill-offices of the many sensational family papers available to the public."

Arthur died on March 6, 1885, in Philadelphia, Pennsylvania, from illness. He was buried in the Chestnut Street Cemetery.