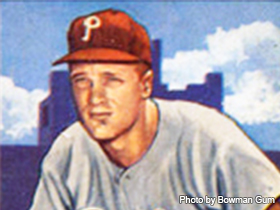 A Hall of Fame pitcher, Richie Ashburn was a Phillies broadcaster for years.

Born in Nebraska in 1927, Don Richard Ashburn was one of the most prolific lead-off hitters in Major League Baseball history. He batted at least a .300 average nine times accumulating 2,574 hits. He won two batting titles and led the National League in hits, walks and on-base percentage over several seasons. Throughout his career he played in five All-Star games before retiring from the game and becoming a sportswriter and broadcaster in the Philadelphia area. Ashburn died in 1997.

Don Richard Ashburn was born on March 19, 1927, in Tilden, Nebraska. Nicknamed "Richie," Ashburn was the son of Neil Ashburn, a hardworking blacksmith and baseball enthusiast, and Genevieve Ashburn. Both resided in Tilden for most of their lives until they followed their son to Philadelphia. He shared being the youngest of four children with his twin sister, Donna. His other siblings were Betty and Bob.

Ashburn's athleticism early in life foreshadowed his future success. At age 8, he participated in the area's midget baseball league overcoming the taunts from fellow players poking fun at his small stature. These criticisms failed to deter the young player. He became the league's premier catcher, and later was promoted to an American Legion Junior team in neighboring Neligh. It was after a few years in the American Legion league that professional scouts began to notice the sure-footed catcher. Organizations in Cleveland and Chicago attempted to sign Ashburn to a minor league contract; however, stipulations set forth by the league nullified both contracts leading him to nearly abandon his dream of playing professional baseball. Fortunately, in his final year on the Neligh team, Ashburn was chosen to represent the West in the East-West All-star game in New York. During the game, played at the Polo Grounds, he awed spectators, and impressed those icons in attendance such as Connie Mack and Mel Ott.

Ashburn's performance in New York put to rest the criticisms concerning his size. The Philadelphia Phillies inked the young catcher to a minor league deal with the Utica Blue Sox. It was in Utica that Ashburn was moved from the catching position to center field because of the strain being placed on his legs. In his first year, he led the team in stolen bases and in batting with a .312 average. At the conclusion of his first season, Utica's star outfielder learned that he was drafted into the armed forces. Following a one year stint of military service, primarily in Alaska, he returned to Utica where he exploded back on to the scene scoring 107 runs, batting an extraordinary .362 and stealing 27 bases. Statistics like these caught the attention of then Phillies manager Ben Chapman who would summon Ashburn to Phillies training camp in Clearwater, Florida.

In his rookie year with the Phillies, Ashburn was named the outstanding rookie of 1948 by Sporting News, was elected to the all-star game, and ultimately, was honored as Rookie of the Year. As if these accomplishments were not enough, he and his girlfriend, Herberta, were married after the season came to an end. Two years later, in 1950, he was the starting center fielder and lead-off hitter of the pennant-winning team known affectionately as the "Whiz Kids." His endless hustle on the field and quiet demeanor off instantly made him a fan favorite in Philadelphia lasting for almost twelve seasons.

In 1951, Ashburn competed in the batting race for the first time finishing second while eclipsing 200 hits to lead the league. In 1954, he led the league in on-base percentage as well as walks. The following year proved to be a benchmark year for the gritty center fielder. He won the first of two batting titles with a .338 batting average. His second batting crown came in 1958 when he hit an astounding .350 average for the season. Ashburn also happened to lead the National League in walks during the year. Unfortunately, this success would not last in Philadelphia. In 1959, as Ashburn slumped considerably, the Phillies traded the veteran outfielder to the Chicago Cubs. After resurrecting his swing slightly in the following years, he moved once again, this time to the expansion New York Mets in 1962. Despite the team's terrible play, he managed to bat over the .300 mark, and for the last time, made the all-star team. Finally, at the end of the 1962 season, a frustrated Ashburn retired from the game he so loved.

Don Richard Ashburn retired with a career batting average above .300 meaning he hit safely in roughly one in every three attempts. He batted an average of .300 or greater in nine seasons accumulating 2,574 hits the majority of which were singles. He won two batting titles and led the National League in hits, walks, and on-base percentage over several seasons. Overall, he played in five all-star games. Largely overlooked, Ashburn's defensive prowess set many records within the league. He set a major league record for the most seasons leading the league in outfield chances and put-outs with nine. The scrappy outfielder's influence on baseball would not end with retirement. He would later write a sports column for The Philadelphia Daily News, and also team up with the venerable Harry Kalas to broadcast Phillies games for more than three decades. In 1995, Ashburn's boyhood dream was realized. The Veterans Committee of the National Baseball Hall of Fame elected him into their ranks. Kalas said of Ashburn, "Anybody who saw him play loves him because he was a bust-tail ballplayer who hated to lose."

On September 9, 1997, Ashburn died at the age of 71 in New York, New York. His body was returned to the Philadelphia area that he so adored to be buried at the Gladwyne United Methodist Church. His retired number "1" will forever be immortalized gracing the outfield wall of the Philadelphia ballpark. Also, a bronze statue of Ashburn was erected in the new stadium where the concourse surrounding centerfield was dedicated as "Ashburn Alley."