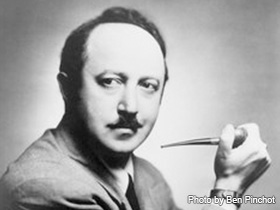 Auslander used his skills as a historian and as a translator to make great works of literature available to children.

Philadelphia's Joseph Auslander had a widely-varied career in literature. Born in 1897, Auslander would graduate from Harvard and would teach there and at Columbia University. He was appointed poetry consultant to the Library of Congress (the post now titled Poet Laureate of the United States). He wrote his own poetry, translated that of others, and edited that of still others. Auslander died in 1965.

Joseph Auslander was born to Louis and Martha (Asyueck) Auslander on October 11, 1897 in Philadelphia, Pennsylvania. In 1930, Auslander married Svanhild Kreutz, who died in childbirth in 1932, leaving a daughter, Svanhild Frances Martha. Auslander married Pulitzer Prize-winning poet Audrey Wurdemann in 1933, and the couple had a son, Louis, and a daughter, Mary.

By the age of 16, Auslander was enrolled at Columbia University. He spent only one year there, leaving to attend Harvard University, where he graduated in 1917. Auslander became an instructor in English at Harvard in 1919 while continuing his graduate work there until 1924. He took a leave of absence from 1921 to 1922 to attend the Sorbonne in Paris on a Parker fellowship. In 1929, he became a lecturer in Poetry at Columbia, where he remained until 1937. From 1937 to 1941, Auslander was the Poet Laureate Consultant in English Poetry for the Library of Congress. In addition, he was the poetry editor for North American Review.

Auslander, who fervently supported the sale of U.S. war bonds during World War II, collaborated with his second wife to write The Unconquerables (1943), a collection of poems dedicated to war-ravaged Europe. The book was credited with raising funds for the fourth major loan drive of the war. Auslander also teamed up with Wurdemann for two novels, Islanders and My Uncle Jan. Additionally, Auslander co-authored The Winged Horse (1927) with Frank Ernest Hill. A history of poetry written for young people, the book was followed up with The Winged Horse Anthology (1939), which was widely used in schools across America. Auslander also translated the poems of Italian author Francesco Petrarch and French author Jean de la Fontaine. Auslander's own books of poetry include Sunrise Trumpets (1924), Cyclops' Eye (1926), Hell in Harness (1929), and Letters to Women (1929). He was awarded the Robert Frost Prize for poetry shortly before his death.