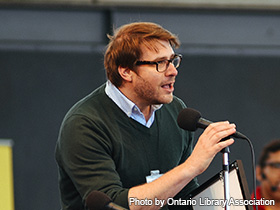 Novelist Jonathan Auxier was raised in Canada and grew up with a passion for children's literature. He earned his MFA in dramatic writing from Carnegie Mellon University, later moving to Los Angeles, California, to work as a screenwriter. His debut book, Peter Nimble and His Fantastic Eyes, centers on Peter Nimble, a blind orphan who is the greatest thief who ever lived, and his adventures. At the time of this writing, Auxier resides with his family in Pittsburgh, Pennsylvania, and teaches children's literature at Chatham University.

Jonathan Auxier was raised in Canada, and during his childhood, he nurtured his love for books, particularly children's literature. Many of these books—such as Robert Louis Stevenson's Treasure Island, Lewis Carroll's Alice Through the Looking Glass, and J.M. Barrie's Peter Pan—fascinated and inspired him by fostering his own sense of wonder, which later influenced his writing.

Auxier went on to earn his MFA in dramatic writing from Carnegie Mellon University in Pittsburgh, Pennsylvania, which is where he also met his wife, Mary. Auxier notes that he "hit on her" because of a shared literary interest: she was carrying an anthology of children's literature that he liked. While Auxier successfully graduated with his MFA degree in 2005, the struggles he encountered between his first and second years of study ultimately planted the seed for his debut book, Peter Nimble and His Fantastic Eyes, which was published in August 2011. In fact, one day Auxier sat down to write a letter, explaining why he was dropping out of the graduate program. Instead, he wrote the first line of what later morphed into his first novel, Peter Nimble: "Now, for those of you who know anything about blind children, you are aware that they make the very best thieves." And he kept writing, finishing the first draft within three and a half weeks.

Auxier reflects on how this project renewed his love for children's literature—particularly the importance of incorporating silliness, fun, play, and nonsense into books—and reminded himself of why he loved telling stories in the first place. He also reflected on how the project allowed him to write about his own interests, rather than writing for others' approval: "I collected children's books my whole life; I was passionate about them. So instead of writing the types of stories that I thought people wanted me to write, this was the first time I thought, 'I want to write something completely for myself.'"

Peter Nimble and His Fantastic Eyes is the story of the greatest thief who ever lived. Peter Nimble, the title character, is a ten-year-old blind orphan who comes across a box containing three pairs of magical eyes during an afternoon of thievery. These magical eyes lead him to embark upon a myriad of adventures that take place beyond the known world—beyond the "edges of a map," to a place where "the rules of science and logic still don't apply." While he navigates the blurred boundaries between magic and science, these adventures propel him forward to discover his "destiny."

The first page of each chapter in the book is accompanied by an illustration that Auxier drew himself. Auxier notes that one of the main challenges he faced, especially as a writer who relies on visual storytelling, was describing the story through the other senses, such as hearing, taste, and smell.

Auxier also explains why he wanted Peter Nimble and His Fantastic Eyes "to be a sort of anthem to delinquency. All my favorite books work to celebrate deviant behavior....for a child whose entire life is controlled by adults, I think inverting that power structure for a brief stint can be incredibly liberating." Though some of the images in the book are quite dark or unsettling for children's literature, Auxier argues that "a whiff of darkness is essential to children's literature" because the book format "creates a safe place for a child to explore dangerous subjects." Ultimately, Auxier also sees the importance of "dual play" of children's books, meaning that they have both adult and childlike conversation, allowing multiple generations to enjoy them.

According to Auxier's website, Peter Nimble was an ABA New Voices pick and a BookPage Magazine 'Best Book' of 2011. His other children's books include The Night Gardener (2014)--a Junior Library Guild Selection, ABA IndieNext pick, Amazon Editor's Pick of the Month, and winner of the TD Book Prize and ILA Book Award--Sophie Quire and the Last Storyguard: A Peter Nimble Adventure (2016), Sweep: The Story of a Girl and Her Monster (2016), and others. At the time of this writing, Auxier resides with his family in Pittsburgh, Pennsylvania, and teaches children's literature at Chatham University.