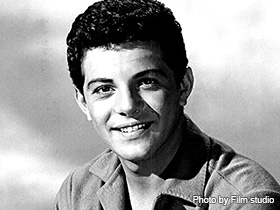 Frankie Avalon became a teen idol with hits such as "Venus" in the 1950s.

Frankie Avalon was born in 1939 in South Philadelphia. Avalon was one of the original teen idols, and he achieved much success in the music industry. After his music career began to decline in the 1960s, Avalon turned to movies. He is credited with popularizing the beach movie genre, a major staple of 60's pop culture. Avalon is also well-known for his role as Teen Angel in the movie Grease. Today, Avalon owns and markets his own line of health care products. He continues to perform in different venues, and he remains married to his wife of 45 years, Kathryn Diebel.

Francis Thomas Avallone, better known as Frankie Avalon, was born on September 18, 1939, in South Philadelphia to Nicholas and Mary Avallone, He has an older sister named Theresa. Although today he is known for his singing and acting career, Avalon got his start playing the trumpet. Labeled by many as a child prodigy, Avalon's father taught him to play the trumpet at a very young age. Practicing four to five hours a day, Avalon made a name for himself playing in local theaters and clubs. His career really started to make headway when he was discovered at a private party.

Al Martino, a singer from the same Philadelphia neighborhood as Avalon, was holding a private party to celebrate signing with a record company. Avalon snuck into the party and began playing his trumpet. In Avalon's own words, "It was just like a movie. Everyone stopped talking and Al Martino liked me." A local talent scout at the party also liked Avalon, and helped get him booked on The Jackie Gleason Show (a variety show running from 1952 to 1970). More television appearances followed, and, in 1954, Avalon made a record with a small label called X-Vik Records. His first recordings were instrumentals called "Trumpet Sorrento" and "Trumpet Tarantaella." Avalon continued playing the trumpet, and by age twelve he was in a local band called "Rocco and the Saints."

Avalon was playing backup trumpet for the band when local public entertainment manager Bob Marcucci asked him if he knew of any talented rock and roll singers. Avalon suggested the band's lead singer, Andy Martin. Marcucci did not care much for Martin, but he also got a chance to hear Avalon sing, and was very impressed with him. Shortly after, Avalon received a recording contract with Philadelphia's Chancellor Records. His first two singles were "Cupid" and "Teacher's Pet." These songs helped him get his first movie role, a minor part in Jamboree (1957). Avalon's next record was called "De De Dinah," written by his managers. The song was "a piece of teen fluff," and, to show his lack of respect for the song, Avalon pinched his nose as he sang it, giving it a very nasal sound. Avalon appeared on Dick Clark's American Bandstand in 1957 to showcase the song, and soon "De De Dinah" had sold more than a million copies, as well as becoming Avalon's first top ten song.

Avalon's first number one song on the music charts was called "Venus"; it was released in 1959. Unlike Avalon's typical songs, "Venus," written by Ed Marshall, was stylistically a much different song than Avalon usually sang; instead of guitars and saxophones, there was an orchestra, and Avalon sang the song in his full voice. Many consider "Venus" Avalon's most well-known song; it sold over a million copies. After "Venus" Avalon also had success with the songs "Bobby Sox To Stockings," "Just Ask Your Heart," and "Why," all of which sold at least a million copies.

In 1960, Avalon's record sales began dropping and his career appeared to be coming to an end. He started taking small roles in movies, such as John Wayne's The Alamo in 1960, and his personal life changed in 1962 when he met his future wife, Kathryn Diebel. Avalon was playing cards with friends in Los Angeles, when the former beauty pageant winner entered the room. Immediately upon seeing her, Frankie knew he wanted to marry her, which he did, three weeks later. Then, in 1963, he had his first starring role in a movie called Drums of Africa. Avalon's movie career exploded later in 1963 when he and Annette Funicello starred in Beach Party and the many sequels that followed. Avalon's career had been revived. The Internet Movie Database biographer states, "these films, with their combination of surfing, low comedy, dancing and bikinis, struck a nerve with teenage audiences," not to mention the fact that they were inexpensive to make. Each individual movie was created over a 15 day span, costing only $350,000 to make, and still reaping huge profits. Trying to capture the significance of Frankie Avalon and the beach movie genre, journalist Thomas K. Arnold of USA Today writes "The Frankie Avalon-Annette Funicello beach movies, produced by celebrated B-movie house American International Pictures, have become an integral part of early 1960s pop culture." Avalon's transition from teen pop star to actor was surprisingly smooth.

Another stage in the revival of Avalon's career came from his cameo performance in the 1978 movie Grease. Initially, he was not sure that he wanted the role. In the original play, the teen angel character was dressed completely in black. In Avalon's own words, the character was "like a motorcycle gang leader." With the permission of director Randall Kleiser, Avalon changed the character to fit his own personal style. Since this time, Avalon has appeared in tours with the stage musical version of the movie, backed by an unwavering fan base. In addition to performing in the musical version of Grease, Avalon also began performing with the "Golden Boys of Bandstand" in 1985. The group was composed of Frankie Avalon, Bobby Rydell, and Fabian, all Philadelphia pop idols of the late 1950s and early 1960s. The show, which involved group performances as well as solos, became so popular that more and more shows had to be added to the schedule. Eventually the "Golden Boys" even took their act across the country. In another wave of nostalgia, Avalon took part in the movie Back to the Beach in 1987, an affectionate parody of the popular beach movie genre he made so popular in the '60s.

Today, Avalon is a businessman. He has developed a line of health care products know as "Frankie Avalon's Health Makeover System" which he sells on television shopping networks. Avalon's trademark tan actually comes from "Twilight Tan," a self tanning product he created and sells on the well-known Home Shopping Network. Avalon still performs in casinos, theaters, and festivals, as well as with the "Golden Boys of Bandstand." He remains extremely popular in all venues. Most recently Avalon appeared on NBC's reality show Grease, You're the One That I Want, to perform "Beauty School Drop Out." Avalon also continues to enjoy good music, relishing classic artists like Barry Manilow and Tony Bennett, while appreciating newer artists as well, like John Legend. Avalon is still married to his wife of forty-five years, Kathryn Diebel, and they have eight children together. From trumpet-playing prodigy to teen pop idol to actor, Frankie Avalon has left his mark on the pop culture forever.