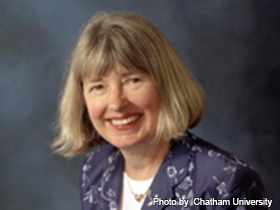 Katherine Ayres is a young adult and children's book author whose work is sometimes set in Pennsylvania. Among her picture books,Up, Down, and Around (2007) was selected as the 2008 PA One Book. Ayres teaches writing at Chatham University in Pittsburgh.

Katherine Ayres was born Katherine Kent in Columbus, Ohio, on October 15, 1947. Her parents, Ray and Betty Kent, moved the family several times during Ayres' childhood, eventually settling in New York. She credits her love of the "Little House" books by Laura Ingalls Wilder and the Nancy Drew mysteries she read in her early life for her interest in writing. In 1965, she graduated from West Islip High School on Long Island. She then matriculated at Ohio's College of Wooster, graduating in 1969 with a BA in psychology and sociology. She would go on to earn an MA at Tufts University in Child Development in 1974.

During her entire professional life, she had consistently been writing and submitting stories for publication, but without much success. At least, she had no success until 1996's Family Tree. This story of an adolescent girl coming to learn of her mysterious Amish side found acceptance and enabled Ayres to break into the publishing world.

Ayres' next undertaking was to explore America in the 1850s. She did so with a pair of novels about the Underground Railroad: North by Night in 1998 and Stealing South in 2001. These two historical novels focus on the children of the Spencer family of Ohio, each of whom aids the family in smuggling slaves to Canada.

In the late 1990s, Ayres wrote two mysteries for the American Girl series: Voices at Whisper Bend (1999) and Under Copp's Hill (2000). Each of these books focuses on an adolescent girl seeking to discover the solution to a mystery. In Voices, the young heroine must find missing scrap metal she has been collecting for the civilian conservation efforts in World War II; in Copp's Hill, a different girl seeks stolen articles from a settlement house in 1908 Boston. The publisher writes that books in the American Girl series are meant to teach "gentle life lessons" and "remind girls of such lasting values as the importance of family and friends, compassion, responsibility, and forgiveness. Full of wisdom and encouragement, the stories show girls how to meet their own challenges with strength and courage."

Another novel in a similar vein, though not part of the American Girl series, is 2000's Silver Dollar Girl. It is the story of young Valentine Harper, an adolescent in Pittsburgh staying with relatives while her father tries to strike it rich in the silver boom of the 1880s. Desiring to be with her father, Valentine disguises herself as a boy and travels west to try to find him. Writing in the Pittsburgh Post-Gazette, Karen Macpherson felt that Ayres "builds up the suspense nicely before drawing her story to a satisfactory close. She also knows how to create characters who are interesting and ring true to young readers."

In keeping with her new home town, Ayres turned more fully to Pittsburgh in 2003's Macaroni Boy. This novel focuses on Mike Costa, an Italian-American boy who lives in the Strip District of Pittsburgh in the midst of the Depression. It details his struggles with the economy of the time, bullies at school, and a mysterious environmental danger harming both animals and people in the area.

Pittsburgh Post-Gazette reviewer Karen Macpherson describes the tale as "a fast-paced story that gives readers in-depth insight into what it was like to live during the Depression." With her local audience in mind, she further notes that "it's obvious that Ayres has done meticulous research into what Pittsburgh, and especially the Strip District, was like the in 1930s. Those familiar with the area will especially enjoy her descriptions of life in the city back then, including Mike's frequent forays into Klavon's, an ice cream store that still exists." Despite not appreciating the extensive details about Pittsburgh, reviewer Deborah Stevenson wrote in the Bulletin of the Center for Children's Books that "there is a lot of life in this kind of story" and that "Mike's family gradual acknowledgment of his growth offer some genuine and uncomplicated satisfaction."

Beginning in 2003, Ayres began publish work in the field of picture books. Her first book of this nature was 2003's A Long Way. It is the tale of a little girl who decides to deliver a gift that has arrived for her grandmother. The grandmother lives next door, but the girl's imagination and her adventures in make-believe make the distance "a long way." Writing in the Florida Times-Union, Brandy Hilboldt Allport says "the charming and simply written plot gets context from the illustrations." Ilene Cooper writes in Booklist that it is an "imaginative tale with clever twist."

Ayres' next picture book was Matthew's Truck, published in 2005. It features little Matthew playing with his truck and learning about the sounds the truck would make while traveling over different surfaces. Bina Williams wrote in the School Library Journal that "the simple story, bright pictures, and sturdy pages make this book a dandy addition to early literacy collections."

In 2007, Ayres published Up, Down, and Around. It is a story of two children who help plant a garden and learn about how the plants grow up into the air and down into the ground. Mary Hazelton wrote in the School Library Journal that the "cheerful story is a pleasant introduction to planting and prepositions." In 2008, Up, Down, and Around was selected as the featured book in the Pennsylvania One Book, Every Young Child program, a program designed to "highlight the importance of early literacy development in preschoolers."

At the time of this writing, Ayres lives in Pittsburgh where she is a lecturer and Coordinator of the Children's Writing Program at Chatham University. She and her husband have three adult children and three grandchildren.