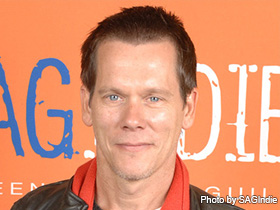 Best known for his role as a rebellious dancing teen in Footloose, Kevin Bacon is a Philadelphia native.

Kevin Bacon is a film and theater actor who has starred in many notable movies including Footloose, Animal House, and Hollow Man. He was born in Philadelphia in 1958. After moving to New York at seventeen for acting school, he gained popularity in a few films and has since become a star. Bacon has been featured in over forty movies and has appeared with so many other actors, a game has been named after him, the "Six Degrees of Kevin Bacon." He married Kyra Sedgwick in 1988, and they have two children. They have homes in Connecticut and New York.

On July 8, 1958, the Bacons welcomed their sixth child, Kevin, into the world. Bacon's father, Edmund, worked as a Philadelphia city planner, and his mother, Ruth, was a teacher and political activist. Kevin Bacon and brother Michael attended the Julie Masterman Laboratory and Demonstration School in Philadelphia. Bacon also attended the Pennsylvania Governor's School for the Arts in 1974. When they were young, the brothers often played music together. As a teenager, Bacon wanted to become an actor. He worked at Philadelphia's Manning Street Actor's Theatre until he moved to New York City after finishing high school.

In the Big Apple, Kevin Bacon attended the Circle-in-the-Square Theatre School. He performed in a number of off-Broadway plays, and in 1978, he made his big screen debut in Animal House with John Belushi. In the late '70s and early '80s Bacon continued working in off-Broadway plays and appeared in soap operas, including The Guiding Light. In 1982, he won an Obie for his performance as a prostitute in the off-Broadway show, Forty Deuce. He also starred in the film of the same name. Bacon's big break came in 1984 with Footloose. With this role, Bacon became a pop icon, to his dismay. In an interview with CBS in 2004, Bacon said, "I was a pop star, yeah. And...it was the last thing I wanted to be. I was in New York. I wanted to be a serious actor." In the film, Bacon stars as a city kid who moves to a new town where dancing is forbidden. The many dance and song sequences in the film made it memorable, but did not show the depth Bacon wanted.

In the '80s, Bacon dated actress Tracy Pollan, who went on to marry actor Michael J. Fox. Bacon moved on, and met Kyra Sedgwick on the set of the TV movie Lemon Sky. They married in 1988 and gave birth to their first child a year later. Meanwhile, Bacon's movies slumped at the box office. His career seemed to be headed downhill so he accepted almost any job. Bacon starred in Tremors in 1990, saying, "I can't believe I'm doing a movie about underground worms." In attempt to bring back his career, Bacon looked for smaller, edgier roles. His role as a gay hustler in Oliver Stone's Oscar-winning JFK in 1991 restarted his career. The critics and the fans started noticing Bacon's skills again. The Hollywood Foreign Press Association nominated Bacon for a Golden Globe for his supporting role as the villain in The River Wild, which starred Meryl Streep. The Rolling Stone review said, "Kevin Bacon is ... in top form, blending mirth and malice." The fans loved Bacon's wide range of talent. The year 1995 brought the true story Murder in the First with Gary Oldman. This picture earned Bacon the Broadcast Film Critics Association Award for Best Actor and a nomination by Screen Actors Guild for Outstanding Performance by a Male Actor in a Supporting Role. In that same year, Bacon starred in the Academy Award-winning Apollo 13 with Tom Hanks and Gary Sinese.

In the twenty first century Bacon has been productive, starring in many movies. One of the first box office hits in the new millennium was a thriller titled Hollow Man, which earned Bacon much recognition, including a Blockbuster Entertainment Award for Best Actor in Science Fiction, and a nomination at the MTV Movie Awards for Best Villain. Clint Eastwood's Mystic River also garnered Bacon praise, winning the Boston Society of Film Critics award for Best Ensemble Cast. Bacon shared this award with Laurence Fishburne, Marcia Gay Harden, Laura Linney, Sean Penn, and Tim Robbins. Mystic River was also nominated for the Screen Actors Guild award for Outstanding Performance by a Cast in a Motion Picture. In 2004, The Woodsman, filmed in Pennsylvania, gained Bacon nominations for best actor from many small film societies. Critics praised Bacon for his acting, the L.A. Times saying, "...Bacon...has a powerful hold on the role and refuses to let go," and "Kevin Bacon is superb as a pedophile who longs to be normal." Bacon also received a nomination at the 2005 Teen Choice Awards for 'Choice Movie Sleazebag' for his role in Beauty Shop. Bacon's numerous awards and nominations over the years would not be complete without his star on the Hollywood Walk of Fame at 6356 Hollywood Boulevard, awarded in 2003.

Over the years Bacon appeared in over 40 films, and he has many Hollywood connections. He has starred with so many other actors and actresses that in 1994 a few college students created a game, the "Six Degrees of Kevin Bacon." The game is to link any actor or actress to Kevin Bacon in six or fewer steps. For example, Gene Kelly was in Singing in the Rain with Debbie Reynolds, who was in How the West Was Won with Gregory Peck, who was in Moby Dick with Patrick Stewart, who did voice work for The Prince of Egypt with Steve Martin, who starred in Novocaine, in which Kevin Bacon cameoed. A shorter link could be Pamela Anderson, who was in Scary Movie 3 with Queen Latifah, who was in Beauty Shop with Kevin Bacon. Even Paris Hilton can be linked to Kevin Bacon. Hilton was in House of Wax with Elisha Cuthbert, who was in Old School with Luke Wilson, who was in Telling Lies in America with Kevin Bacon.

The performing arts have always been important to Bacon. Starting in his childhood, he played music with his brother Michael, now an Emmy Award-winning composer, and in 1994 they made it official. The Bacon Brothers currently have four records, and have toured the country playing a mixture of rock and roll, folk, and the blues. Kevin Bacon plays guitar, percussion, harmonica, and sings. Michael Bacon plays the guitar, cello, and also does vocals. The band is rounded out with others to make a six-man band. Bacon said on his web page, "I don't care what we play, they're gonna to start screaming Footloose! Footloose!"

On January 18, 2007, Kevin Bacon launched SixDegrees.org. SixDegrees.org is a network that allows fans to find out what charities their favorite celebrities care about. "People pick up celebrity magazines to see how people dress, which handbags are hot, which cars to buy. Why not look at what (celebrities) care about?"

As Bacon approaches the half-century mark, he still works hard and will appear in several movies in the coming years. His role as a Desert Storm veteren in the 2009 HBO movie Taking Chances landed him a Golden Globe. More recently, Bacon has starred in the 2011 films X-Men: First Class and Crazy, Stupid, Love, and is filming R.I.P.D., which is due to come out in 2013. Bacon lives with his wife Kyra Sedgwick and their two kids, son Travis, born in 1989, and daughter Sosie, born in 1992. They reside in Manhattan, and near Kent, Connecticut.