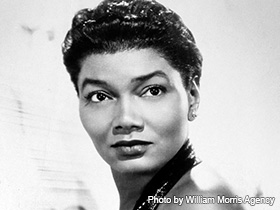 Born in 1918, Pearl Bailey became a jazz icon. Through Broadway shows and Hollywood movies, Bailey became known throughout the culture for her acting and singing talents. She was awarded the Presidential Medal of Freedom in 1988. Pearl Bailey passed away in 1990 in her Philadelphia home.

Pearl Mae Bailey was born in Newport News, Virginia, on March 29, 1918. Born Pearlie Mae Bailey, she was the daughter of Joseph James Bailey, a minister, and Ella Mae Bailey. On August 31, 1948, she married John Randolph Pinkett, Jr., and was divorced from him in March 1952. On November 19, 1952, she married Louis Bellson, Jr., a jazz drummer, with whom she adopted two children: Tony Bellson and Dee Dee Bellson.

Bailey made a living as a singer, stage performer, and author. She was a vocalist with such bands as Count Basie and Cootie Williams. In 1946, she made her Broadway debut in St. Louis Woman; followed by Arms in the Girl, in 1950; Bless You all, 1950; House of Flowers, 1954; and Hello, Dolly!, 1967—69. Bailey's motion picture work includes Variety Girl, 1947; Isn't It Romantic, 1948; and Porgy and Bess, 1959. From 1970-1971, Bailey had her own musical variety program on the American Broadcasting Company called ThePearl Bailey Show.

In 1946, Bailey received the Donaldson Award for Most Promising Newcomer to the Broadway Stage for St. Louis Woman. In 1968, she received a special Tony Award for Hello, Dolly!, as well the Outer Critics Circle Award for Outstanding Performances for Hello, Dolly!, in 1969. In 1976, she received the Screen Actors Guild Life Achievement Award. In 1988, Bailey was given the Medal of Freedom, the highest civilian award in the United States. She was also given a star at 7080 Hollywood Boulevard on the Hollywood Walk of Fame.