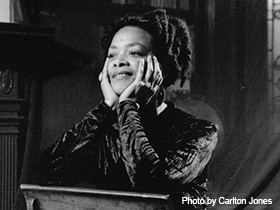 Author of Gorilla, My Love (1972), novelist Bambara spent her final years in Philadelphia.

With her first novel, Gorilla, My Love, published in 1972, Toni Cade Bambara established a distinct voice for herself with her unique conversational style. Her additional contributions to African American literature and community were manifested through her teaching career, compilations, and filmmaking. Bambara lived the last ten years of her life in Philadelphia, Pennsylvania, and died there in 1995 of cancer.

Miltonia Mirkin Cade began her life in Harlem in the 1940s. When she was five-years-old she told her mother that she wanted to be called "Toni" and by the time she finished college, all of her professors called her Toni Cade. She changed her name legally to Toni Cade Bambara in 1970.

Bambara had an extensive education. As a girl, she would visit the Apollo Theatre with her father (which added to her interest in art) and Speaker's Corner with her mother (which added to her interest in politics). She earned her Bachelors of Arts degrees from Queens College in both Theatre Arts and English. She studied Commedia dell' Arte at the University of Florence and the Ecole de Mime Etienne Decroux in Paris in 1961. Following these experiences, she attended various colleges in New York to study linguistics, dance, and cinema. She obtained a Masters of Arts in American Literature from the City College of New York in 1965.

Bambara contributed greatly to African American literature. She was one of the first writers to compile an anthology of African American women's writing, The Black Woman: an Anthology (1970). Perhaps her most noted books are Gorilla, My Love (1972), a collection of short stories, and The Salt Eaters (1980), a novel. Both highlight African American culture. She also published African American folklore to teach readers about the African story-telling heritage.

In 1959, Bambara won the John Golden Award for Fiction from Queen's College and the Peter Pauper Press Award in Journalism from the Long Island Star. Her first novel, The Salt Eaters, won the 1981 American Book Award and Langston Hughes Society Award. In that same year, she was also awarded a National Endowment for the Arts Grant. She received both the Best Documentary Award from the Pennsylvania Association of Broadcasters and a Documentary Award from the National Black Programming Consortium in 1986.

Bambara was also well-known for teaching and community service. She taught at the City College of New York, Scribe Video Centre, Rutgers University, Atlanta University, and Spelman College. She also began to do community work as a caseworker for the New York Department of Welfare. She also helped to build the SEEK (Search for Education, Elevation, Knowledge) program at the City College of New York with which she discovered more talent by welcoming people of all backgrounds, especially minorities, and encouraging the flow of creativity, giving them additional opportunities for success.

Toni Cade Bambara's writing style was notably different than many of her contemporaries. First, not every story plot is linear. Common elements include flashbacks, streams of consciousness, and subplots entwined within the main plot. She also had a unique flair for dialect. Critics describe the conversational tone of her stories as "being black." Her unique writing is often described as poetry by interviewers and biographers, though it is technically prose.

Toni Cade Bambara was diagnosed with colon cancer in 1993 and died two years later, at age 56, in Philadelphia. She is survived by her mother, Helen Brehon, and daughter, Karma Bene Bambara. Afterwards, her daughter collected several of her unpublished works, which comprised Deep Sightings and Rescue Missions (1996), and Toni Morrison edited Bambara's last novel, Those Bones are Not My Child (1999).