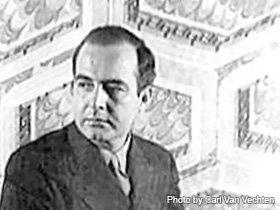 West Chester native Samuel Barber won a Pulitzer Prize for the libretto to the opera Vanessa. His most famous composition is Adagio for Strings, featured in Platoon.

Samuel Barber was born in West Chester, Pennsylvania, in 1910. His family and the area's cultural climate allowed for his musical growth. Throughout Barber's life, his family's cottage at Pocono Lake Preserve was a valued retreat. As a composer Barber not only created a vast collection of musical pieces, but also an enduring American musical tradition. During his career Barber was awarded two Pulitzer Prizes for the Piano Concerto and the opera Vanessa. Barber also gained entrance into the prestigious American Academy. After a long period of ailing health, Barber died in New York City in 1981.

Samuel Osborne Barber, II, pioneer of the American Symphony, hailed from the conservative atmosphere of West Chester, Pennsylvania. The people who lived there regarded musicians with suspicion. Music was considered a diversion. Despite this social attitude, the remarkably handsome, strong, lively, and intelligent Barber insisted his life purpose was to become a composer. At six, Barber was already inventing piano melodies. He taught himself musical notation by writing vocal lines first and then adding accompaniment. Barber developed a unique style of fusing music with poetry. Still in his adolescence, Barber wrote many pieces for piano, several for the organ, a work for two pianos, a cantata, a suite for the violin, and his first opera. He spent summers with his aunt and uncle, Sidney and Louise Homer, in Bolton, New York, which provided a lively cultural oasis for him. There he was encouraged to become acquainted with only the finest music.

Barber was an outstanding student and leader who composed his class alma mater, which still stands as the song for West Chester's high school. At 14, a very ambitious Barber commuted weekly to the Curtis Institute of Music in Philadelphia to have music lessons and to focus on literature and foreign language. The Philadelphia area also gave him access to the sounds of the Philadelphia Orchestra and The Academy of Music. Barber was the most talented student of music in America. He was granted the Prix de Rome award and the Pulitzer traveling scholarship in 1935, earning him two years of study at the American Academy in Rome. This short-lived yet invaluable European experience served to boost his long, prestigious musical career. Barber was a very literary composer. The texts of Barber's songs were inspired by the lyrics of such poets as Percy Bysshe Shelley, James Joyce, and William Butler Yeats. Barber was already attracting gifted musicians who recognized his work as unique because it incorporated the literary into the world of music; words appreciated by the mind could now be felt by the heart through musical notes.

As a direct result of Barber's entrance to the American Academy, Barber composed his First Symphony and crafted his most well-known composition, Adagio for Strings (1936). (Click here to hear a radio essay about the Adagio for Strings, part of National Public Radio's series on the 100 most important musical works of the twentieth century. The file requires Real Player to run.) Adagio for Strings would later be used as the haunting theme to Oliver Stone's film, Platoon, based on Stone's first-hand combat experience in Vietnam. The Adagio, our "national funeral music," has forever been associated with the death of a prominent person. It was played at the funerals of Presidents Franklin Roosevelt and John F. Kennedy, Albert Einstein, Senator Robert A. Taft, and after the World Trade Center attacks on September 11, 2001.

Legendary Italian conductor Arturo Toscanini, famous for neglecting music by American composers, made a rare exception for Barber's Essay for Orchestra and Adagio for Strings. Toscanini took Barber's work on tour to England and South America where the work of a North American composer was presented to Latin American audiences for the first time. As Barber's sound reverberated through the world, a controversy over traditional music versus music "in the modern idiom" was revived. Toscanini's bold choice in music sent a clear message that Barber's contemporary works provided a fresh incentive to the public's more traditional musical taste.

In 1942, Howard Hughes invited Barber to write music for a Hollywood film, but his participation was cut short by a call to report for service in the United States Army. Barber's eyes were not good enough for combatant service, but he made efforts to obtain a useful job for the war effort. Barber could only participate in military authorized musical activities while assigned to the Second Service Command of Special Services in Battery Park, New York; however, during World War II, Barber's music was in high demand especially throughout Europe and Russia.

During his middle years, Barber wrote an opera, Vanessa (1958), which explored new language and demonstrated the essence of his melodic power within a whole dramatic work. His Pulitzer Prize-winning Vanessa was the story of two women caught in a dilemma between fighting for one's ideals at any cost and compromising with what life has to offer. It received spectacular reviews in the New Yorker as "the finest and most truly 'operatic' opera ever written by an American...Mr. Barber has demonstrated that an American composer with sufficient knowledge and feeling for the great international operatic tradition can turn out a near masterpiece in the genre, using all the wonderful vocal and dramatic potentialities of the opera- house stage."

In 1962, Barber completed the Piano Concerto that he had begun while at the Curtis Institute in Philadelphia. Its premiere was September 24, 1964, at the opening week of performances in the new Philharmonic Hall. Played by John Browning, the performance was astoundingly executed. At the high point of his career, the Piano Concerto won Barber a second Pulitzer Prize in 1963 and a Music Critics' Circle Award in 1964. During 1978, when Barber was planning a performance on his Third Essay for Orchestra, he was diagnosed with multiple myeloma, cancer of the lympathic system. His chemotherapy treatments prevented him from attending the last performance of his work during his lifetime. After a year of sporadic hospitalizations, Barber suffered a stroke at the age of 71 while on a trip to Scotland. Extremely debilitated, Barber was brought back to New York where he spent the rest of his life at the University Hospital and his apartment. Friends arranged for a constant flow of music to comfort the man who had given them the joy of music. He is buried today next to his mother in the Barber family plot at Oakland's Cemetery in West Chester. He was one of the most honored and regularly performed American composers in Europe and the Americas during the mid-century decades. Unlike most composers, Barber was able to sustain his livelihood almost entirely through his music. His works encompass 48 opus numbers, more than 100 unpublished pieces and are representative of almost every musical variety. With a touching communication to his audience, and a combined style of American and European musical and literary traditions, Samuel Barber, in musical form, lives on.