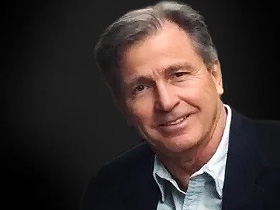 Rodney Barker wrote And the Waters Turned to Blood (1997) and is a nonfiction author and investigative journalist who was born in Lewisburg, PA.

Nonfiction author and investigative journalist Rodney Barker was born February 9, 1946, in Lewisburg, Pennsylvania. After graduating from Knox College in 1968, he began his career writing for several regional and national magazines and published his first novel, The Hiroshima Maidens, in 1985. Barker was asked to testify before a House subcommittee regarding his investigation of pfiesteria piscicida, the subject of his most well-known novel, And the Waters Turned to Blood (1997).

Rodney Barker was born on February 9, 1946, in Lewisburg, Pennsylvania. He is the son of Thomas and Jean Barker (now Dawson). After graduation from high school, Barker attended Knox College, earning a BA in 1968. He also took some graduate courses at San Francisco State University. In May of 1989, Barker married sculptor Star York. Aside from writing nonfiction books, Barker has also worked as a newspaper editor, investigative reporter, and feature writer for a variety of regional and national magazines.

The style that Barker uses in his work is clear, matter-of-fact, and informative. His background as an investigative reporter is evident, but his style is far from that of a cut and dry newspaper article. In the first page of his books, Barker comes off as an unbiased reporter, observing a story from all possible angles and presenting it in an engaging manner.

In nearly every American history textbook there is extensive coverage of World War II—Pearl Harbor, Nazis, and of course the atomic bombs. These books discuss the horror of the atomic bombs, but stress the great success they brought in bringing an end to the war. What the textbooks inevitably leave out are the accounts of the Japanese people affected by the bombs and the political repercussions using the bomb had in America. These are the topics that Barker's book The Hiroshima Maidens (1985) focuses on. Barker chronicles the story of twenty-five women badly disfigured by burns caused by the bomb dropped on Hiroshima, who were sent to the United States for reconstructive surgery. Barker lends special credibility to this piece, his parents having been one of the host families for the girls during their year-long stay in America.

The Broken Circle (1992) describes the horrifying events surrounding the Chokecherry Massacre that occurred outside of Farmington, New Mexico, in the early 1970s. In this small town bordering the Navajo Reservation there had always been racial tensions between the whites and the Native Americans. It all came to a head one horrible week when three Indians were found in the desert, murdered and mutilated. The most shocking part of the story came later when three high school teens were arrested for the crime. Barker's narrative chronicles the relationship between the whites and the Native Americans, and how each culture deals with the crime in their own way. Charles Bowden in the New York Times describes how Barker is able to penetrate the elusive nature of Navajo culture: "Mr. Barker is able to peek behind the veil that protects their powerful sense of spirituality from alien eyes."

Barker is also the founder of the collectible figurine company The Trail of Painted Ponies and has lectured widely on environmental, scientific, and health issues.