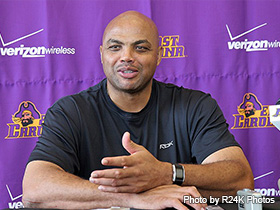 Charles Wade Barkley, born February 20, 1963, cast a new image of the National Basketball League. As one of the shortest power forwards in the league, yet the most outspoken, Barkley's skills dominated many players. His type of play was more concerned with rebounds instead of points, but he received numerous accolades throughout his career. He played with the Philadelphia 76ers from 1984 to 1992. He retired from basketball in 2000 and was elected to the Hall of Fame in 2006. In his later life, the former athlete still maintains celebrity status with his acts of charity and his novice experience as a sports television broadcaster.