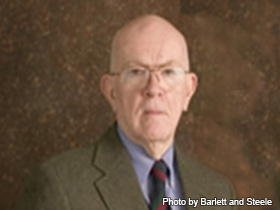 Barlett is the co-author of the 1975 Pulitzer Prize winner in National Reporting for the series "Auditing the Internal Revenue Service."

Pulitzer Prize-winning reporter Donald Barlett was born in DuBois in 1936. Educated at Pennsylvania State University and later in the U.S. Army, Barlett became a journalist and, after a string of jobs at smaller papers, moved to Philadelphia. At the Inquirer, he was teamed with James B. Steele. The combination would win two Pulitzer Prizes for National Reporting. Barlett continues to reside in Philadelphia.

Donald Barlett was born in DuBois, Pennsylvania, on July 17, 1936, and grew up in Johnstown. His parents were James and Mary Barlett. Donald Barlett married Shirley A. Jones, a nurse, and has one son, Matthew.

Barlett attended the Pennsylvania State University between the years 1954-1955. He later served as a counterintelligence agent for the U.S. Army from 1958-1961. After that time, he devoted his life to becoming a journalist. Barlett began writing for the Knight newspaper chain, which supported his goal to write enterprise articles. He began with the Reading Times, and moved through a series of appointments in Akron, Cleveland, and Chicago, before taking a job in Philadelphia with theInquirer. Since the early 1970s, Barlett has written news articles with partner James Steele. The pair were renowned for their credible reporting and their choices in story topics.

After a few months working for thePhiladelphia Inquirer, Barlett and Steele investigated the Federal Housing Administration (FHA) for fraud in a subsidy program for rehabilitating and selling lower income housing. Barlett and Steele published their findings in a documented series of articles. Their research won them many awards. The two men went on to uncover covert operations throughout criminal courts, tax law enforcement, the U.S. government, and the U.S. Foreign Aid Program. In 1975 and in 1989, Barlett and Steele won the Pulitzer Prize for National Reporting with a series of expos??s on the Internal Revenue Service and the Tax Reform Act of 1986, respectively.

Through researching these political issues, Barlett became fascinated with Howard Hughes and his relations with the U.S. government. With his partner, Steele, Barlett co-authoredEmpire: The Life, Legend and Madness of Howard Hughes (1979).The critics loved the book and praised the two for their effort, stating that it was the best biography of Hughes to date. After the publication of this book, the pair were known for their style of documentation and went on to co-write other books, such asForevermore: Nuclear Waste in America,in 1985,andAmerica: What Went Wrong? in 1992.