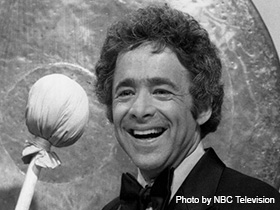 Chuck Barris earned fame as the creator of classic game shows, including The Gong Show.

Television producer and host Chuck Barris was born in Philadelphia in 1929. After graduating from Drexel University, Barris went on to produce a number of television game shows, including The Dating Game and The Newlywed Game. He also hosted The Gong Show. Barris authored two autobiographies. In Confessions of a Dangerous Mind, Barris claims to have been a CIA hit man during the 1960s.

Charles Hirsch Barris was born on June 3, 1929, in Philadelphia, Pennsylvania. Barris attended Drexel University where he was a columnist at the student newspaper. After graduating in 1953, Barris held various jobs including book salesman and fight promoter. Barris then moved to New York. He married Lyn Levy, daughter of a CBS founder. Barris found a job as a page at NBC, and soon entered the management trainee program. He was laid off in an efficiency cutback.

After a year, unable to land a job, an ABC executive asked him if he wanted a temporary engagement: Barris was to take the train to Philadelphia every day, sit on the set of American Bandstand and keep an eye on Dick Clark, who was caught up in the payola scandal. He had a financial stake in publishing companies, record labels and even pressing plants whose records he promoted heavily on American Bandstand. While on the set, he wrote a song called "Palisades Park." In 1962, Freddy "Boom Boom" Cannon recorded the song and it became a big hit. ABC did not want another payola investigation and forbade Barris from writing more songs.

Barris was promoted to daytime programming at ABC in Los Angeles. He then became a producer. Barris' first game show attempt was called People Poker, though it never sold. He borrowed $20,000 from his stepfather, developed The Dating Game and sold the pilot to ABC in 1965. The network opted not to put it on the schedule, but after its other game shows failed, The Dating Game made its debut and became an instant hit. The show involved three bachelors or bachelorettes competing for a date with a contestant blocked from their view. The contestants' racy banter and its colorful set was a revolution for the game-show genre.

In 1966, Barris followed up his success with The Newlywed Game. The show, which involved married couples quizzed on their spouses, may best be known for the trademark euphemism: "whoopee." That same year, The Dating Game made it to prime time television. Though critically panned, his shows were popular with television audiences.

Barris quickly sold three more shows: The Family Game, Dream Girl of 1968, and How's Your Mother-in-Law? After he launched Barris Industries in 1968, more shows followed. "Music changed when the Beatles arrived," David Schwartz, the editor of the Encyclopedia of TV Game Shows, explained, "and game shows changed when Chuck Barris' shows came on."

Barris' formula for success began to wear thin, however, and by 1974 the last of his shows, The Newlywed Game, was dropped. That year Barris wrote a bestselling novel. He spent six months writing You and Me, Babe, the fictionalized story of his marriage to Levy, which sold 750,000 copies thanks to heavy promotion.

In 1976, Barris made a comeback with The Gong Show. This time Barris took the job as host. Though critics argued that the show demeaned its contestants, The Gong Show found its audience and made the host into a star. That same year, he divorced Levy. The two had one daughter, Della. By 1980, The Gong Show was falling behind in the ratings and was eventually canceled.

In 1986, Barris scaled down Barris Industries, and moved to Saint-Tropez with his new wife Robin "Red" Altman. He then wrote his autobiography, Confessions of a Dangerous Mind. In Confessions, he wrote "I have written pop songs, I have been a television producer. I am responsible for polluting the airwaves with mind-numbing puerile entertainment. In addition, I have murdered 33 human beings." Barris claimed to have worked as a CIA hitman, with over 100 kills. In interviews, when asked about whether he was really a CIA operative, he tends to respond, "I can't really confirm or deny it."

He published his second autobiography, The Game Show King, in 1993. Since leaving the game show scene, Barris has survived lung cancer, divorced, and remarried. In 2003, Confessions of a Dangerous Mind was made into a feature film directed by George Clooney. The film explores one of the book's most controversial story lines: Barris' claim that he was a CIA operative in the 1960s.