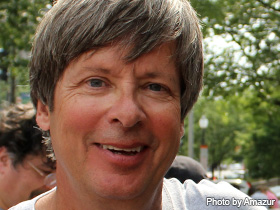 Dave Barry moved to Haverford, Pennsylvania, in 1965 to attend Haverford College, where he majored in English. Barry has written columns for the West Chester Daily Local News and the Miami Herald, and as of this writing is a popular syndicated columnist. He is also the author of nonfiction books, novels, and children's books. His humorous, often less-than-historically-accurate, style has won him fans of all ages. Throughout his work his style is distinctive: sarcastic and comical.

Dave Barry was born July 3, 1947, in Armonk, New York, to the Reverend David Barry and his wife, a homemaker. Barry was educated at Pleasantville High School, where he was named Class Clown of his graduating class in 1965. He later went on to graduate from Haverford College with a Bachelor of Arts in English in 1969. Right out of college, Barry got a job as a general reporter for the West Chester Daily Local News in West Chester, Pennsylvania. Six years later, in 1975, he took a job traveling around to businesses with Burger Associates. There, he offered his services as a professional writer teaching business men and women how to write professionally. Barry eventually moved on from that job in 1983.

Fourteen years after graduating from college, Barry took a job working for the Miami Herald. After only five years at the newspaper writing humor columns, he won the Pulitzer Prize for Commentary. According to Pulitzer representatives, Barry won this prominent award "for his consistently effective use of humor as a device for presenting fresh insights into serious concerns." He has been interviewed numerous times about his column and multiple achievements; however, whenever he is asked about his career, Barry often replies with something like, "Newspaper readership is declining like crazy. In fact, there's a good chance that nobody is reading my column." However, as of this writing, his book sales continue to climb.

Intermittently throughout his career as a columnist for the Miami Herald, Barry has written more than 30 books. These include everything from collections of his columns, to sarcastic self-help books, to children's novels. Throughout these genres, his comedic style is consistent. About his book, Dave Barry Slept Here: A Sort of History of the United States (1998), Richard Lingeman of the New York Times Book Review said, "...Mr. Barry should be praised for his irreverent eye and his witty word processor." Barry may make up most of what he writes and his spoofs of news events may not be completely accurate, but the way he sees it, "We journalists make it a point to know very little about an extremely wide variety of topics; this is how we stay objective."

Barry has also made his way onto both the big screen and the television screen. Two of his books, Dave Barry's Complete Guide to Guys (1996) and Big Trouble (2000) were the basis for two different movies. In Complete Guide to Guys, released in 2005, Barry plays himself as, according to the movie's website, the characters "travel through time to probe the vast mystery of guyness." Vince Leo of Qwipster's Movie Reviews does not necessarily think the movie generates the same laughs as the book, saying that, "Barry's a funny guy, and so is Arch [the director], but in a different sort of way, and the two styles aren't able to quite work in unison." He ends his review saying that he would not advise against seeing it, but the book is definitely funnier. Big Trouble was released in 2002 with an all-star cast including Tim Allen, Janeane Garofalo, and Johnny Knoxville. In his New York Times movie review, "Stumbling, Tumbling And, Oh Yes, Hijacking", Elvis Mitchell calls Big Trouble "third-rate quality." Barry's television venture proved much more successful, as the series Dave's World ran for four seasons with 98 episodes. Dave's World ran from 1993-1997 and earned an Emmy and three Young Artist Award nominations. In the series, Harry Anderson played Dave, a Pulitzer Prize-winner living in the suburbs with his wife and children.

His more recent endeavors include his writing of children's books. Peter and the Starcatchers (2004) is his first book in a four-book series that acts as the prequel to the J. M. Barrie children's novel, Peter Pan. The book begins with Peter and his orphan friends boarding a ship called the Never Land. Through the course of this book, Barry answers many of the vague beginnings with which Barrie began his novel. In it he uses his usual subtle humor and what appears to be a strong connection to his young audience. Full of pirates, sailors, floating rats, and mischievous boys, this story is action-packed from the beginning and fun for all ages. In Barry's words, "You can only be young once. But you can always be immature."

Ilene Cooper of Booklist says that "This deserves the hype," saying "It's not so much the story that's good here, though it's a rousing tale, and to the authors' credit, there are explanations for everything found in the classic story—from Peter's inability to grow up to the name Neverland. The real lure is the richly drawn characters, especially the villains, who exhibit just the right amount of swagger and smirk. The pacing is excellent as well. Although this is a long book, very short chapters make it manageable for younger readers, and the nonstop action will keep the pages turning." Deborah Stevenson of The Bulletin of the Center for Children's Books, says the book shines with "sassy repartee and kitschy comedy detail, and the book has diligently accounted for all the key elements of Peter Pan, ranging from Peter's eternal youth and ability to fly to Captain Hook and his crocodile follower."

At the time of this writing, Dave Barry continues to publish books and is a popular syndicated columnist living in Miami. He says of writing: "all you have to do is think up a certain number of words! Plus, you can repeat words! And they don't even have to be true!"