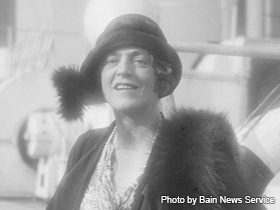 An acclaimed stage actress and Academy Award-winner, Ethel Barrymore was born in the Holmesburg neighborhood.

Born in Philadelphia in 1879, Ethel Barrymore was one of the most respected stage and film actresses of her time. Being a part of the stage's "Royal Family," Barrymore seemed destined for artistic greatness since her birth. Throughout her lifetime, she starred in countless Broadway productions and movies that made her an item of public adulation. Her most famous performances include: Captain Jinks of the Horse Marines, The Corn is Green, and None But the Lonely Heart, for which she won an Academy award. She died in 1959 from heart disease.

Ethel Mae Barrymore was born on August 16, 1879, in Philadelphia, Pennsylvania. Daughter of Maurice Barrymore and Georgiana Drew, she was born into a family whose theatrical roots reached back four generations. Her father came to the United States from England in 1874 and quickly established himself as a popular matinee idol. Georgiana was a high-spirited comedienne who's family had long been among the elite of the theater. Though both parents passed down their extraordinary talents to young Ethel, neither gave her much more than good genes. Both Maurice and Georgiana spent the majority of Ethel's childhood on tour; therefore, her grandmother, Louisa Lane Drew, assumed the role of matriarch.

Though the Barrymore family was Episcopalian, after Georgiana converted to Roman Catholicism, Ethel was sent to live in the Convent of the Sacred Heart in Philadelphia. By the time that she celebrated her thirteenth birthday, her mother died from tuberculosis. From that point on, Ethel took on many adult responsibilities in her household including caring for her two brothers, Lionel and John. Several months later, young Ethel was informed that her grandmother had given up management of the Arch Street Theatre. Within the blink of an eye the family's fortunes had changed for the worse. In order provide her family with immediate necessities, she quit school and began her career in acting. Though this opened a door of opportunities for Ethel, this sudden change brought a quick end to her dreams of becoming a concert pianist. All three of the Barrymore children became involved in the performing arts, earning them the title of the stage's "Royal Family." This title was quite fitting of the trio considering their strong theatrical lineage and the great success that was to come for each of them.

With help from her uncle, John Drew, Jr., Barrymore joined several touring groups that helped to propel her to stardom. She made her New York debut in 1894 as Julia in The Rivals. After performing in such comedies as The Bauble Shop and Rosemary, Barrymore was invited to appear in a London production of Secret Service. This would prove to be the biggest and greatest career move that she would ever make. Audiences adored her sophisticated manner, and she quickly became known to all of England's social and artistic elites. She returned to America in 1898 only to find that her popularity had grown to the level of national celebrity. By the time that she appeared as a leading lady in the Broadway production of Captain Jinks of the Horse Marines, Barrymore graduated from mere celebrity to an icon and trendsetter for American women.

Barrymore became more than satisfied with her new high society status and stardom, but she quickly grew restless playing juvenile roles. A more mature status came with Barrymore's marriage to socialite Russell Griswold Colt in 1909. The couple produced three children: Samuel, John, and Ethel. This high-point in her personal life also brought professional success. The Shadow, Our Mrs. Machesney, and Declasse were great successes both in New York and on tour.

By the 1920s, Barrymore's marriage took a turn for the worse. She and Colt were divorced in 1921. Again, Barrymore's work directly coincided with her domestic hardships. Her portrayal of Shakespeare's Juliet in 1922 did not achieve a particularly triumphant response. The '20s however were not completely filled with stage failures. Barrymore won critical acclaim in The Second Mrs. Tenure and The Constant Wife, for which she enjoyed three years of success. In 1928, she opened The Kingdom of God in her very own Ethel Barrymore Theatre.

The Great Depression proved to be just as difficult a time in Barrymore's career as it was for the rest of America. Not only did her career plummet, but she battled financial problems and a drinking problem. Putting a drunk on stage every night was a liability to any production, so in 1931 she moved to make a career in the place which she so openly scorned - Hollywood. In 1932, she won the opportunity to act with both of her brothers in Rasputin and the Empress. She also gained financial help from NBC when she appeared on a series featuring several of her past stage roles. By 1940, she happily moved back to her beloved New York to appear in some of her greatest stage productions. Her portrayal of Miss Moffat in The Corn is Green became her most recognized and acclaimed character. Reporter Eliot Janeway reviewed her performance as, "the epitome of stylish elegance." The three year run was interrupted by yet another return to Hollywood. This time Ethel did not waste her time performing in second rate movies. In 1944, Barrymore starred in the film None But the Lonely Heart for which she won an Academy Award for Best Supporting Actress.

Few other actresses have ever achieved such high public adulation as Barrymore. By the 1940s, she had regained her title as "first lady of the theater" and salvaged a career that seemed to be destroyed with the Depression. Author and critic Harold Clurman once said that Barrymore, "possessed a naturally regal quality that was as easy and organic to her as breathing." Her vibrant and often imitated voice always held her audiences captivated and silent for over a half of a century.

After performing in Embezzled Heaven in 1944, various film offers led her to move to southern California permanently. She became an expert in supporting roles as she appeared in over twenty more films. She received yet three more Academy Award nominations for The Spiral Staircase, The Paradine Case, and Pinky. Toward the end of her life, she became impatient with those who resented the changes in drama that were brought about by movies and television. In one of her last interviews she stated, "We must recognize that change is not going to appeal to us personally if we are irrevocably determined to abide by the traditional standards of taste."

Barrymore died on June 18, 1959, of heart disease. Just shy of her 80th birthday, she was the last member of her generation of "The Royal Family" to pass on. On that day, the marquee lights of the Ethel Barrymore Theatre dimmed for ten minutes in remembrance of the well respected and much admired woman who represented the great tradition of American theatre.