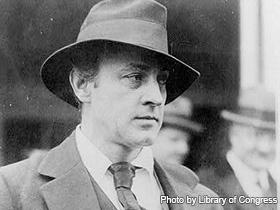 John Barrymore, a.k.a. The Great Profile, was a member of the Royal Family of acting.

John Barrymore was born on February 15, 1882, to Georgiana Drew Barrymore and Maurice Blythe in Philadelphia. John and his siblings, Ethel and Lionel, were raised by their grandmother, Louisa Lane Drew. Barrymore attended college and was an artist for a brief period of time before he decided to follow his family's natural gift: acting. He began acting in 1903 and throughout his career he had roles in many plays and films. He is best known for his role as Hamlet. Barrymore had four failed marriages and three children. John's health and career began to decline in 1936 because of his alcoholism. Barrymore died on May 29, 1942, in Los Angeles, California.

John Sydney Blythe was born on February 15, 1882, in Philadelphia, Philadelphia County. He later became known as John Barrymore and nicknamed "The Great Profile." John is considered one of the most famous in the Barrymore Family, which is also known as the American Theatre's Royal Family. Barrymore's mother, Georgiana Drew Barrymore, was a comic actress. His father, Maurice Barrymore, who was formerly known as Herbert Blythe, was also an actor. John Barrymore had two siblings: Lionel and Ethel, who were both actors as well. As a child, John was raised by his grandmother, Louisa Lane Drew, since his mother and father had acting careers that required them to travel. However, even when Georgiana and Maurice were around, their children were neglected. John had a very close relationship with his grandmother, but unfortunately she died when he was only 15 years old. His mother died of tuberculosis around the same time. In addition, John's father was in a mental health institution for a portion of his childhood. These events in his childhood are often correlated to his emotional instability and alcoholism in adulthood.

John Barrymore attended King's College in Wimbledon and New York's Art Student League. After his education, John pursued an art career. He sketched for the New York Evening Journal. However, acting came naturally to most of the Barrymores and it was an easy way for John to make money, so he began an acting career. In 1903, John appeared in his first play, Glad of It. By 1909, he had become a famous Broadway star because of his appearance in The Fortune Hunter. John's stage career began with An American Citizen, which debuted in 1912 and peaked after his role as Hamlet. John Barrymore became known as "his generation's most acclaimed Hamlet" and the film was considered America's best Hamlet in the 20th Century. In his autobiography, Confessions of an Actor, Barrymore writes, "The only part that I have ever played that is always fresh to me is Hamlet."

In addition to his career on the stage, Barrymore made another career in film. Some other films that brought him fame include: The Great Profile; Grand Hotel; Romeo and Juliet; Bill of Divorcement; Topaze; Twentieth Century; and Dr. Jekyll and Mr. Hyde, in which he played the roles of both Dr. Jekyll and Mr. Hyde. Throughout his acting career from 1914 to 1941, Barrymore acted in over 50 films.

Barrymore's nickname, "The Great Profile," came from his part in the film The Great Profile, which was a semi-autobiographical comedy. The film exploited his drinking problems, relationships, and life in Hollywood. Barrymore was often characterized as the "bad boy" in his films. For instance, in the film Grand Hotel, Barrymore played the thief, Baron Von Geigern. Grand Hotel is a classic film starring Barrymore and his brother, Lionel. This film won Best Picture at the Academy Awards in 1932 and was one of the first to utilize a plot in which many different types of characters are brought together in one setting. This type of plot has been used in many films, like Titanic and The Breakfast Club.

John Barrymore was married four times. His first marriage was with Katherine Corri Harris in 1910. They divorced six years later and by 1920 he married Blanche Marie Louise Oelrichs, who was a playwright and actress. Barrymore and Louise had one daughter, Diana Barrymore, who died at the age of 38 from a combination of alcohol and sleeping pills. In 1925, Barrymore and Louise divorced as well. Three years later, he married Dolores Costello and they had two children: Ethel Mae and John Drew Barrymore. John Drew Barrymore is the father of Drew Barrymore, one of today's famous Hollywood actresses. By 1935, Barrymore and Dolores Costello also divorced. His last marriage was with Elaine Barrie in 1936, but they divorced by 1940.

Alcoholism was a problem for Barrymore early on in his life and by 1936 it began to interfere with his work as well. He often had a difficult time remembering his lines; therefore, to avoid bankruptcy and to support his extravagant lifestyle, he began working in radio. On May 19, 1942, Barrymore collapsed during the rehearsal for The Rudy Vallee radio show. He was brought to the Hollywood Presbyterian Hospital and diagnosed with cirrhosis of the liver, pneumonia, atherosclerosis, and hemorrhaging ulcers. He died ten days later on May 29, 1942 in Los Angeles, California at the age of 60. His last words were "Die? I should say not, dear fellow. No Barrymore would allow such a conventional thing to happen to him" (IMDB). John Barrymore's career in show business is commemorated by his Hollywood Walk of Fame Star located at 6667 Hollywood Boulevard in Hollywood, California.