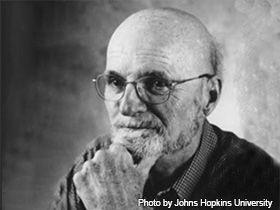 John Barth was born May 27, 1930, in Cambridge, Maryland, and later attended Johns Hopkins University. He became an instructor at Pennsylvania State University in 1953 and set his novel Giles Goat-Boy (1966) in the university's campus. Barth became associate professor before he left Pennsylvania State University in 1956 to become professor of English at State University of New York (SUNY) at Buffalo. He served as a visiting professor at Boston University and then a professor at Johns Hopkins University before retiring in 1995. Barth has written award-winning and best-selling novels and received numerous grants and awards, including the F. Scott Fitzgerald Award for Distinguished Achievement in American Fiction (1997).

"Everyone is necessarily the hero of his own life story." - John Barth.

John Simmons Barth was born May 27, 1930, and raised along the Eastern Shore of Maryland in Cambridge. His father was John Jacob Barth and his mother was Georgia Simmons. John Barth's first calling was jazz. After he graduated high school in the spring of 1947, he attended the Julliard School of Music and studied elementary theory and advanced orchestration. Barth played the drums and had aspirations of becoming a musician or orchestrator but due to financial constraints, transferred to Johns Hopkins University in the fall of 1947. Though he spent only a single summer semester at Julliard, music continues to influence his life and writing.

It was at Johns Hopkins University where Barth moved in the direction of writing and began studying journalism "because it sounded easy," he told Town & Gown (T&G) in 1977. During his junior year, he realized that he had become attached to writing fiction and later graduated with a major in creative writing in 1951.

During this time he married Harriette Anne Strickland on January 11, 1950. Barth continued at Johns Hopkins, earning his MA in 1952. He held his first teaching position as a junior instructor at John Hopkins University while working toward his doctorate. After one year of doctoral study at Johns Hopkins University he was forced to find a better paying job to support his two children and pregnant wife.

John Barth recounted his job searching experiences to T&G: "The job market for English grads was nearly as tight as it is now. I wrote the customary sixty or seventy letters, and Penn State happened to be the place that came through."

When he arrived at Penn State University, Barth was astounded to find that equal importance was given to each area of study. "Imagine my surprise," he told T&G, "a place with professors of ice cream!" It was because of the large campus, which he referred to as "a huge, rough democracy," that he used a university as a metaphor for society in his book Giles Goat- Boy (1996). Before the novel was published, Barth moved from State College to Pine Grove Mills, 5.5 miles from State College, allegedly because he did not want his novels to be considered "academic" novels. He claimed that if he were identified as a college town resident then his book would not be taken seriously.

Barth would find time to play drums with Robert Frank and Philip Young of the English Department. Young told T&G, "The impression he gave was of a thoroughly efficient person. Very nice, but not exactly jovial." Barth's time was devoted to his manuscript. He admitted to using time during office hours to write, and he often went to class poorly prepared, "trusting the muse to provide me with sentences like a revivalist might trust God." Despite his priorities, he was promoted to assistant professor in 1957 and associate professor in 1960.

While at Penn State, Barth wrote four novels. His first, The Floating Opera (1956), was written in three months in 1955 and revised in six more to satisfy his publisher. In the last three remaining months of 1955, Barth started The End of the Road, which he finished in 1958. In 1958, he also received a grant to conduct research in Maryland for The Sot-Weed Factor (1960). In 1960, he finished The Sot-Weed Factor and began his fourth novel, Giles Goat-Boy, which became so complicated that he had to organize the book on salvaged key-sort cards from the Pattee Library.

Six years later Barth completed Giles Goat-Boy; it totaled a lengthy 800 pages. The book became a New York Times Bestseller. It included many characteristics of the University Park Campus, including a building called Founders Hall that resembles Old Main. The university is uncannily portrayed as an entire world in the book, similar to how it may seem to many students and faculty at Penn State. The main character, Giles, acts half-human, half-goat. It is presumed that John Barth got the idea from visiting the sheep farm in the agricultural department of Penn State University with his children. Because of his character Giles, Barth was elected an honorary life member of the American Dairy Goat Association. "I still have the membership card," he said, "in case I'm in a tight corner."

In 1965, a year before Giles Goat-Boy was published, Barth left Penn State University to be a professor of English at the State University of New York at Buffalo. "If I did 'outgrow' [Penn State], it wasn't quite in the way people claimed. Of course my marriage was ending, and we were trying to save it by a change of scene," he said about leaving Penn State. "But what I really wanted was a more urban environment. I had grown up in a small town, and I had spent twelve years here. I needed to get myself into the city for a while." A few years after the Barths moved to New York, John and Harriette divorced. A year later, on December 27, 1970, Barth married Shelly Rosenberg, whom he met at Penn State while she was a student there.

Barth's next book, Chimera (1972), won the National Book Award after his two previous nominations for The Floating Opera (1956) and Lost in the Funhouse (1968). He became one of the most well- known post-Vietnam-war writers. He has won multiple awards and grants, including the Brandeis University Creative Arts Award, the Rockefeller Foundation grant, the National Institute of Arts and Letters grant, and an honorary literature degree from the University of Maryland. His achievements reflect his dedication to his writing and capability to address his audience, whomever they may be. E.P. Walkiewicz, author of John Barth, calls Barth a "novelist of the absurd," a "fabulator," and a "cosmic satirist." He is known to portray rather realistic things through a fantastical perspective that envelops the reader.

Although many consider Barth to be a great writer because of his postmodern aesthetic and the philosophical quality of his writing, his intention to write a compelling story is first and foremost. According to Barth, as quoted by Walkiewicz in John Barth "a gifted writer is likely to rise above what he thinks to be his aesthetic principles," and that he can be hindered by too much understanding of "what he's been up to." Barth allows himself to be lost during the writing of his stories. He said that he conceives "of the business of plot as a rather exact equivalent of the element of melody," in Walkiewicz's John Barth. Many of the settings for Barth's novels are along the shore, and it is apparent that his early years have been strong influences. John Barth is professor emeritus at Johns Hopkins University.