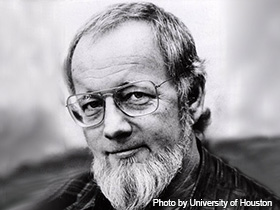 A post-modern novelist and short-story writer, Donald Barthelme was born in Philadelphia.

Donald Barthelme, one of the masters of post-war fiction in the United States, was born in Philadelphia in 1931. Much of his early career would be spent in journalism, both in the military and in the civilian world. A Guggenheim Fellowship in 1967 allowed him to write his first novel, Snow White (1967). He spent the rest of his life teaching and writing fiction until his death in 1989.

Barthelme attended the University of Houston, where he majored in journalism, wrote sporadically, and contributed to the college newspaper and yearbook. He graduated in 1956. While in college, Barthelme became a reporter for theHouston Postin 1951. Two years later, in 1953, he was drafted into the U.S. Army and sent to Korea. There, he edited the army's official newspaper,Stars and Stripes. After being discharged from the army, he returned to theHouston Postin 1955, but later that year took a public relations job at the University of Houston. In 1956, Barthelme foundedForum, the university's literary magazine. Three years later, he joined the board of directors of the Houston Contemporary Arts Museum. After two years of serving as a board member, he was promoted to director of the museum.

Barthelme's writing has been said to reject traditional forms of writing and take on a life of its own. Many critics have not appreciated his writing because of its unusual nature. Other critics have dubbed it extremely modern and individualistic.

His first novel,Snow White, was a parody based upon both Grimm's fairytale of Snow White and Disney's version of the story. On the opposite side of the spectrum, Barthelme won a National Book Award in 1972 for his children's book,The Slightly Irregular Fire Engine; or, the Hithering Thithering Djinn (1971).In 1981, Barthelme published his first collection of author's best works,Sixty Stories, for which he won a PEN/Faulkner Award for fiction. In his lifetime, Barthelme received many prestigious awards. Along with his Guggenheim Fellowship in 1966, he also wonTimemagazine's Best Books of the Year and the National Book Award for children's literature. In 1972, he won the Morton Dauwen Zabel Award from the National Institute of Arts and Letters. Four years later, he won the Jesse H. Jones Award from the Texas Institute of Letters forThe Dead Father.He also won the PEN/Faulkner Award for fiction and theLos Angeles TimesBook Prize.