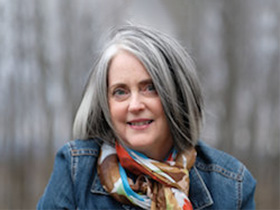 Susan Campbell Bartoletti was born in PA and has written numerous novels and nonfiction books for young adults, including No Man's Land (1999) and Hitler Youth (2005).

Susan Campbell Bartoletti was born in Harrisburg, Pennsylvania, in 1958 and grew up in rural Pennsylvania, a place she has used as a setting in her young adult novels and nonfiction books. A student, author, and teacher, Bartoletti uses historical elements as the backbone of many of her works, and she has won many awards for her ability to combine historical facts with her unique writing style.

Susan Campbell Bartoletti was born Susan Campbell in Harrisburg, Pennsylvania, on November 18, 1958. Two months after her birth, her father was killed in a car accident. Her mother later remarried after Bartoletti finished kindergarten, and the family moved to the outskirts of Scranton, Pennsylvania. She loved growing up in the countryside of rural Pennsylvania, and she later used this setting in many of her works. As a young girl, Bartoletti enjoyed reading, drawing, horseback riding, playing piano, and listening to the Beatles. By the eighth grade, she was editor of her newspaper and had discovered her passion for art and writing. She decided to pursue her career as soon as possible, and after her junior year of high school, she left to attend college early. Bartoletti attended Marywood College and majored in art at first. After realizing the stiff competition in the field and receiving praise from her creative writing professor, Campbell switched gears and decided to major in English and secondary education instead. After her sophomore year, she married Joseph Bartoletti, and the couple later had two children, Brandy and Joey. Bartoletti received her BA in 1979 and obtained her first teaching job at the age of 20. She began teaching English at North Pocono Middle School and remained there for 18 years. She also co-advised the school's award-winning literary magazine for 15 years. While teaching, she simultaneously earned her MA in English at the University of Scranton in 1982. Bartoletti became involved in many different activities, including the Children's Literature Association, the National Council of Teachers of English, and the Rutgers Council on Children's Literature. She also found time to write more. Her first picture book, Silver at Night, was published in 1994. This was an autobiographical work about her husband's grandfather, an Italian immigrant who spent nearly half a century in the coal mines. Bartoletti wanted a lot of her writing to focus on historical events, particularly labor history in her native Pennsylvania. In 1996, her work Growing Up in Coal Country was published. This book focused on the working and living conditions of Pennsylvania coal towns and won her numerous awards including the Carolyn Field Award, the Lamplighter Award, and the Parents Gold Choice Award. She remained ambitious, and as she was writing and teaching eighth grade English she became an instructor in children's literature at the University of Scranton. In 1998, Bartoletti decided to stop teaching at the middle school in order to pursue her writing career and earn her PhD in creative writing. She attended Binghamton University with a full fellowship, where she won the Excellence in Research award for her doctoral dissertation.

In 1999, Susan wrote a book concerning child labor laws and the hardships children endured as they were forced to work in big industries. Kids on Strike! discussed the problems of child labor and the actions to strike against them. The pictures within the work reveal children suffering from sleep deprivation and missing fingers and showed the world just how tragic child labor was. She also focused on another historical tragedy in 2001 when she finished writing Black Potatoes: The Story of the Great Irish Famine, 1845-1850. This work tells the story of the Great Potato Famine in which one million Irish died from starvation and disease, and two million had to leave Ireland to escape death. That same year, the Pennsylvania Library Association named Bartoletti the Outstanding Pennsylvania Author of the Year. In the midst of all the attention, Bartoletti wrote yet another book titled The Flag Maker (2004). This was a story about Caroline Pickersgill and her mother, Mary, sewing a large-enough American flag for the British to see it during a major battle in the War of 1812. She was inspired to write about it after she saw the 80-pound masterpiece in the Smithsonian Institute in Washington, DC.

One of Bartoletti's most compelling books was written in 2005. Hitler Youth: Growing Up in Hitler's Shadow is a story about young Germans devoting their lives to Hitler and his Nazi regime. The book also incorporated stories about young people resisting the movement, a dangerous and often fatal move. The photographs in the book put the impact of Hitler's campaign in perspective and are difficult to look at. One of the first photos was a 1934 photo taken during German Youth Day in Potsdam where a young boy is shown raising his hand in the Nazi salute. In 2006, Hitler Youth became a Newbery Honor Book selection.

On her website and in interviews, Bartoletti mentions that she is often asked if she writes the works she does, which often delve into difficult and complex topics, "to show kids today how good they have it." The answer is no. She hopes that her works give "readers courage — courage to question and to think critically about history; courage to consider and respond to their social, political, and existential responsibilities; and, most of all, courage to stand up."

In 2009, she won the Washington Post's Children's Book Guild Award for Body of Nonfiction Work. Bartoletti also won the Carolyn W. Field Award in 2009 for her novel The Boy Who Dared. The Boy Who Dared earned Bartoletti many more honors and distinctions, including American Library Association Book of Distinction and Best Book for Young Adults, Booklist Top 10 Historical Fiction for Youth, and International Reading Association Notable Book for an Important Society. In 2010, she published They Called Themselves the K.K.K.: The Birth of an American Terrorist Group, which was a Junior Library Guild Selection. This children's book also earned recognition and was placed on the Best Children's Book of the Year List for the School Library Journal, Kirkus, and Publisher's Weekly.

Susan Campbell Bartoletti has served as a professor of children's literature for the Pennsylvania State University's World Campus and, at the time of this writing, lives in Moscow, Pennsylvania, where she continues to write and publish.