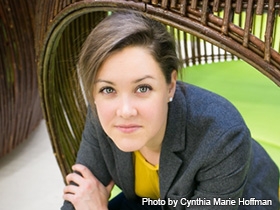 Batykefer had not originally intended on having a career in poetry. She explained in an email interview that being creative is not something that she chose; instead, she believes that it is inherent. "[Creativity is] not something that I think you can just decide to be or not be, not something you can turn on or off like a faucet."

She credits an unwavering creativity for her own writing career. She explained, "I didn't decide to become a writer because it seemed like a good career option. I simply realized that I can't not write, and if that was the case—if I was essentially doomed to be a writer— I should try to do it up right: I should try for the MFA, try to make a book, try to get that book published, try to keep making books for the rest of my life. It seemed more true to try to be a writer, and only a writer, than to just assume that writing would never get me anywhere and remain this simmering, unused thing on the backburner." Batykefer was first published in Southern Illinois University at Edwardsville's Sou'wester magazine in the fall of 2006. That publication featured Batykefer's poem "Photo Album." Batykefer went on to get her book, Allegheny, Monongahela, published in February 2009.

She was unexpectedly notified that the book, a collection of poems written almost entirely in a coffee shop in Madison, Wisconsin, was accepted for publication. After that, Batykefer states that she went through a period of "post-partum [depression]." The poet said that she was under the impression that she would have to send out manuscripts for "the rest of her life" before becoming recognized for her work and that she had thought of the awarded collection as unfinished. Batykefer describes her book as using "the confluence of rivers in Pittsburgh as a metaphorical lens to investigate the emotional collisions between the world and the self in a complex and difficult sibling and family relationship. Rooted in a mutable and watery landscape that is not consistently recognizable, Allegheny, Monongahela is an imagistic exploration of the ruinous misalignment that exists between the external and internal lives and the ways in which art can close the gap."

Batykefer feels very strongly connected to the Allegheny.She stated that "I 'grew up'— in the sense of starting to make my own decisions and take control of my life— on the Allegheny River, where I learned to row during high school.Being a suburban kid, and a geek, I had spent very little time in the city I professed to be a native of by the time I was sixteen and joined the crew team.So, I actually learned to navigate the city on the level of water.To this day, when I drive around Pittsburgh, I am most fully aware of where I am in relation to where I need to be when I am driving on a bridge over the Allegheny, because I just know where things are from the perspective of a boat on the river."

She has won numerous awards for both her short stories and poems. These include third prize for the 2006 Tin House/SLS Kenya Competition for creative nonfiction, an Associated Writing Programs Intro Journal Award, and the Benjamin Saltman First Book Prize. She received nominations for the 2007 and 2008 Best New Poets Anthologies. Between 2007-2009, she also attended Bucknell University as a Stadler Poetry Fellow.

Batykefer's writing has strong ties to nature, no doubt influenced by her love of rowing. Due to injuries sustained during years of rowing in college, Batykefer is no longer able to row, though she wishes she were. When questioned about the similarities between rowing and writing, Batykefer explained, "the same trance-like focus on senses, the deeply instinctive state that was called up during some of my best rows is the same kind of out-of-body experience I try to achieve with my writing.The act of making a poem often begins logically enough, but at some point it becomes this purely intuitive, instinctive endeavor.There is no analysis, no objectivity, only the placement of language in an arrangement that feels most like what I am attempting to express.My best poems feel almost like sign-language or body language to me while I am writing them."

Along with her vivid imagery of nature, Batykefer also has a knack for bringing inanimate objects to life. For instance, in her poem "Night Blooming Cereus," also from Allegheny, Monongahela, she writes: "The flowers' white mouths sighing open, cool tendrils/ heavy and curling with water."

Her goal in writing is to "to communicate my experience to a reader in a way that will come as close to replicating that experience as language will allow." She stated, "Working to refine how I use language and metaphor and narrative in the various genres I work in is an effort to more clearly communicate to a reader my experience, as exactly as is possible. To connect with them across the boundaries that keeps all of us alone."

The poet said that she is inspired by the artwork of Georgia O'Keefe and the poetry of Sharon Olds, Quan Barry, and Nick Flynn. She stated, "[Barry and Flynn's] poems come to me whole, so seamless that I cannot see how they fit together or how to tear them apart to see how they work—they just do, and exquisitely, and so they are compelling even after I've memorized them, because they are always mysterious." Batykefer even goes so far as to call Flynn's Blind Huber the "finest collection of poems I have ever or will ever read."

Erinn Batykefer's poem, "Pittsburgh As Self-Portrait I," was selected for publication by the Public Poetry Project of the Pennsylvania Center for the Book in 2009.

In 2012, Batykefer earned her Master of Library and Information Studies from the University of Wisconsin-Madison and co-founded, with Laura Damon-Moore and Christina Endres, the Library as Incubator Project — a concept that originated in class discussion and has been realized as a project dedicated to the creative advocacy of libraries. Its mission is to "promote and facilitate creative collaboration between libraries and artists of all types, and to advocate for libraries as incubators of the arts."

At the time of this writing, Erinn Batykefer works as an Adult Services Librarian in Pittsburgh, where she lives, and continues to serve as the cofounder and editor of the Library as Incubator Project.