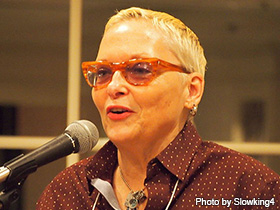 Native Pittsburgher Jan Beatty has written several volumes of poetry, including Boneshaker (2002) and Jackknife: New and Collected Poems (2017), as well as a memoir, American Bastard (2021)

Poet and author Jan Beatty was born and raised in Pittsburgh. She credits the city’s industrial landscape and her father’s storytelling as the primary influences on her writing. Beatty has penned several poetry collections and chapbooks, as well as the memoir American Bastard. In addition to her writing career, she has taught in Carnegie Mellon University’s creative writing program and Carlow University’s MFA program. She has led the Madwomen in the Attic Writing Workshop since 2004 and served as the host of WYEP’s literary radio program, “Prosody.”

Jan Beatty has been called a “blue-collar bard, noted for writing bluntly in passionate, sometimes raw language, of waitresses and junkies, miners and steelworkers, not to mention sex, drugs, and rock stars” (Ciabattari). A lifelong Pittsburgher, she has incorporated scenes and memories from the city into her poetry and in her memoir, American Bastard. Born in 1952 and placed for adoption by her birth mother, Beatty spent the first year of her life in Roselia Asylum and Maternity Hospital in the Hill District. The couple who adopted her, Robert and Mildred Beatty, were Pittsburghers through and through. They met at McCrory’s 5&10 Store and dated secretly until he joined the Navy during World War II and she started working at a North Side assembly plant. After the war, Beatty’s father became an American Tobacco Company salesman and the growing family moved to Whitehall, just outside of Pittsburgh. Growing up, Beatty knew she was adopted and felt acutely conscious of looking different from the rest of her tight-knit extended family. A shy child, she spent hours reading in a special attic nook her father set up for her. At the same time, she was a talented athlete and loved listening to rock n’ roll music on her transistor radio. She credits the distinct tone of her writing to the hilly, industrial Pittsburgh landscape and her father’s front-porch storytelling.

The first in her family to attend college, Beatty experimented with multiple career paths before becoming a writer. After graduating from Baldwin High School, she enrolled at West Virginia University (WVU). At WVU, she switched majors between physical education, journalism, and nursing, finally settling on a degree in social work. Although Beatty took no writing classes at WVU, she did stumble into a women’s consciousness-raising session, an introduction to feminism that would shape her future work. After graduation, she worked in maximum security prisons, an abortion clinic, and a welfare office, but eventually became disillusioned with the field of social work and became a waitress. While waiting tables and renting an apartment in the Squirrel Hill neighborhood of Pittsburgh, she began taking night classes in poetry at the University of Pittsburgh. In 1990, as an MFA graduate student, she joined the Madwomen in the Attic writing group. Hosted by Patricia Dobler at Carlow University, this community of female writers helped Beatty find her voice as a writer. During the same year, she was the first reader featured on “Prosody,” a WYEP public radio program that she would start hosting in 1994. After completing her MFA, she taught creative writing at Carnegie Mellon University (CMU) for two years and then began leading writing workshops throughout the region, including at Kent State University and Penn State.

Beatty has opened doors for countless Pittsburgh writers. In 2004, she started leading Madwomen in the Attic, the same community that inspired her as a young writer. Madwomen provides a space for women of all ages to write together and, most importantly, speak freely in a safe environment. Recently, Madwomen has over 350 members across the country, along with eleven sections of poetry, fiction, and nonfiction workshops. In her capacity as Madwomen’s leader, Beatty directs programming, teaches workshops, and edits the nationally distributed anthology Voices from the Attic.

In 2021, Beatty published her award-winning memoir American Bastard, an exploration of her adoption experience, including twenty years of research, writing, therapy, and reflection. While working as a waitress and taking MFA classes, she had embarked on a personal journey to find her birth parents: Dorothy Staiger (a woman from Pittsburgh’s Garfield neighborhood) and Canadian-born hockey star Bill Ezinick. The search was both painful and fulfilling, allowing Beatty to reconstruct missing pieces of her personal history and bloodline. After finishing the manuscript, she spent four years in search of the right editor and publisher, landing on Red Hen Press. Like much of her poetry, American Bastard blends genres and draws inspiration from a range of sources, including song lyrics and Michael Collier’s Home Ground: A Guide to American Landscape.

At the time of writing, Beatty continues to lead Madwomen in the Attic, teach at Carlow University, and write new poems. Pittsburgh’s landscape still grounds her work. In an essay tribute to her adopted father, Beatty writes:

“This Pittsburgh with its industrial spaces is a physical landscape to me, but also a psychic one, with its architecture of land/river/mill/house/bridge. To me, it is a landscape of sudden rises into a formidable drama of the hulking, empty mill, the rounded hills, the generous span of the bridge, your house, my house, water everywhere. I grabbed and continue to grab at the beautiful hills in Pittsburgh until they spell HOME. I believe I carry the images of Pittsburgh differently because of this – I have built a house in my heart that is Pittsburgh – a kind city that has given me a place to be” (Beatty, “Jan Beatty: Publications.”)