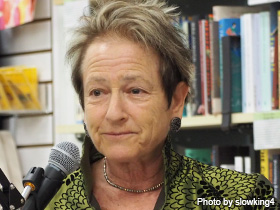 Robin Becker has written several acclaimed poetry volumes, including All American Girl (1996) and The Black Bear Inside Me (2018).

Robin Becker was born in Philadelphia and attended Boston University. She has taught at the Massachusetts Institute of Technology and is currently a Professor of English and Women's Studies at Pennsylvania State University (Penn State). In 2010, she was selected as the Penn State Laureate, and she is the author of seven collections of poems and a scholar of Lesbian and Gay Studies. All-American Girl and The Horse Fair received nominations for the Lambda Literary Award, and All-American Girl won that prize in 1996. She has been honored by the George W. Atherton Award for Excellence in Teaching and The Robin Becker Chapbook Prize, named for her by Seven Kitchens Press. At the time of this writing, Becker is a Penn State Liberal Arts Research Professor Emeritus of English and Women's Studies and continues to publish poetry.

Robin Becker was reared in Philadelphia by her parents, Benjamin Becker and Ann Weiner. Her work is influenced by her Russian-Jewish heritage, and she inherited the gift of storytelling from her grandmother. Becker has said, "She made the shtetls of Ukraine come alive for me, the anti-Semitic violence against the Jews, the political activism of her brothers, the sex segregated religious schools." Through Becker's own examination of creative form and content, her grandmother taught the essentials of personal reflection and expression. Becker stresses, "From her I learned the importance of timing, pacing, word choice, imagery."

After high school, Becker attended Boston University and received her Bachelor of Arts degree in 1973 and a Master of Arts degree in 1976. Following graduation, she began lecturing at Massachusetts Institute of Technology and served at the school for thirteen years as an Assistant Professor of Exposition and Rhetoric until 1993. While her primary concentrations are English and poetry, she is also well-versed in visual arts, contemporary theater, and dance.

Robin Becker began building her name in the literary field through prestigious memberships to the Modern Language Association of America and the Poetry Society of America. She served on the board of directors for Associated Writing Programs from 1993 to 1996. She was drawn back to Pennsylvania in 1993, serving as a visiting professor at the Pennsylvania State University (Penn State), where she soon became an Associate Professor of English and Women's Studies. In 1998, Becker gained full professorship.

Becker's direct, lyrical narratives touch on the complex subjects and emotions related to her cultural heritage and social and sexual identities. Her collections also deal with, in part, the life-changing event of her sister's suicide in 1987. Both The Horse Fair (2000) and All American Girl (1996) confront suicide and coping with the repercussions of such a tragedy. These poems include, "When Someone Dies Young" and "Sisters in Perpetual Motion." In her search for meaning, she has employed her religion and such Jewish texts as The Torah to spiritually enhance her writing. Liturgical music and the High Holy Day services enter her works and play a major part in her life. Because of her strong interest in art history, Becker also explores painting, drawing, or sculpture as subjects in her poetry. She has written about the lives of painters, such as Charlotte Salomon and Rosa Bonheur, a 19th century painter known for her famous oil painting, The Horse Fair. Becker's interest in art has fueled her writing, and she is a casual painter on the weekends.

Also regarded for her contributions to Lesbian and Gay studies, Becker was invited as a visiting scholar to the Center for Lesbian and Gay studies at the City University of New York in 1998. She has said "Feminist scholarship and Gay and Lesbian poetry have provided me with the tools with which to work." Her collections of poetry develop precise, delicate imagery and use her own experience of transitioning from girlhood to womanhood as a guide. Fellow Pennsylvanian Maxine Kumin has also been a tremendous inspiration to Becker. From her, Becker has learned that "woman poets could celebrate their lives and not position themselves as victims in every story."

Kumin is a Pulitzer Prize-winning poet and friend of Becker. She has written four books of poetry and has appeared in such publications as New York Quarterly, Nimrod, and in several anthologies. She has said, "Robin Becker's first collection of poems shows a controlled ironic intelligence and a steadfastness of vision. The grandmother poems, the self as child, the self as adult female, the poems of travel and search all reflect her clear unafraid image in the mirror."

As a feminist, Becker affirms her female voice through her poetry. She has delivered over 125 speeches across the United States, and her collections, such as The Horse Fair, All-American Girl, Giametti's Dog (1990), and Backtalk (1982), have accredited her with various distinctions including: the Lambda Literary Award (1996), Virginia Faulkner Prize for Excellence in Writing (1997); and fellowships from the Massachusetts Artist Foundation in Poetry (1985), The National Endowment for the Arts (1990), The Bunting Institute of Radcliffe College (1995), and The William Steeple Davis Artist-in-Residency (2000). In 2002, the Frick Art and Historical Center in Pittsburgh published a limited-edition fine art chapbook of her poems, Venetian Blue. Becker is also a member of the Academy of American Poets.

For her strides in teaching, Becker has been honored with The Pennsylvania State University George W. Atherton Award for Excellence in Teaching (2000), which is presented each year to four faculty members who have devoted substantial effort to undergraduate teaching. She has also taught workshops at the Fine Arts Center in Provincetown.

Robin Becker has contributed poetry, short fiction, essays, and book reviews to numerous anthologies, textbooks, and prestigious literary journals, including, Georgia Review, Kenyon Review, The New Yorker, and Poetry magazine — with two appearances on the cover of The American Poetry Review. She has been a contributing editor to Ploughshares and poetry editor for the Women's Review of Books, where she wrote the column, "Field Notes." In recognition of her creative skills, The Prairie Schooner magazine awarded Becker the 2010 Glenna Luschi Award for Excellence in Writing for 10 poems published in that journal.

Her poem, Santo Domingo Feast Day, was selected for publication by the Public Poetry Project of the Pennsylvania Center for the Book in 2001.

The Pennsylvania State University named Robin Becker the Penn State Laureate in 2010. At the time of this writing, Becker is a Penn State Liberal Arts Research Professor Emeritus of English and Women's Studies and continues to publish poetry.