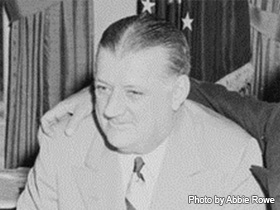 One time owner of the Eagles and the Steelers, Bert Bell was NFL commissioner from 1946 to 1959.

Bert Bell was born in Philadelphia, Pennsylvania on February 25, 1895. Bell attended Haverford Preparatory School and learned of his many athletic talents. He enrolled at the University of Pennsylvania in 1915, where he attended classes and played football. After college, Bell purchased the Philadelphia Eagles in 1933, and in 1940, traded the franchise for the Pittsburgh Steelers. Bell sold the Steelers franchise and was elected Commissioner of the National Football League in 1946. Bert Bell died on October, 11, 1959, at Philadelphia's Franklin Field. Four years after Bell's death, he was inducted in the Football Hall of Fame.

Bert Bell was born DeBenneville Bell February 25, 1895, in Philadelphia, Pennsylvania. His parents, John Cromwell Bell, a prominent lawyer in Philadelphia, and Fleurette de Benneville Myers sent him to Haverford Preparatory School in 1911. He struggled in academics, but his talents as a young football, baseball and basketball player became apparent.

In 1933, Bell and former teammate Lud Wray purchased the franchise of the National Football League's Frankford Yellow Jackets for $2500. The team's franchise had gone into abeyance in 1931 for financial reasons, despite having won the NFL Championship in 1926. Bell became co-owner and changed the franchise name to the Philadelphia Eagles. On May 6, 1934, Bell married Frances Upton, a Broadway Actress. Frances forced Bert to quit drinking, and they had two sons, Bert Jr. and Upton, and one daughter, Jane.

During the economic depression, from 1933 to 1936, the Eagles franchise lost between $80,000 and $90,000. In 1936, Bell managed to buy out his partners for $4,500 and became sole-owner and head coach from 1936-1940. During this time period, the Eagles held a record of ten wins, 44 losses, and two games ending in a tie. Bert served as head coach of the Philadelphia Eagles until 1940, when he sold the franchise and became co-owner of the Pittsburgh Steelers. In 1943, due to wartime shortages in resources and man-power, the two franchises merged and became known as the "Steagles."Bell created the National Football League draft in 1936—the first reverse order draft in history. This reverse order draft enabled the worst teams to get the best picks in order to maintain balance and exciting competition in sporting events worldwide. Bell founded the Maxwell Football Club in 1937, which to this d ay, presents awards to the top college and national players.

On January 11, 1946, Bert Bell sold the Steelers franchise and was nominated NFL Commissioner. Bell replaced Elmer Layden and signed a three-year $25,000 a year contract. Bell renewed his contract in 1949 for $300,000 to be paid out over ten years. As NFL Commissioner, Bert managed to reduce gambling crimes and helped to pass laws that made it illegal for players to not report threats, gambling deals or other shady dealings. This was the aftermath of a nearly fixed NFL Championship game in 1946 in which players were directly threatened. Bell's attitude towards the sport helped create the marriage between football and national television. Bert Bell is most known for coining what has become a cliché: "On any given Sunday, any team can beat any other team," when asked about an upcoming televised football game.

Bert Bell served as NFL Commissioner until October 11, 1959, when he suffered a fatal heart attack at Philadelphia's Franklin Field while watching a close game between the Pittsburgh Steelers and the Philadelphia Eagles. Bell survived a prior heart attack in February of the preceding year and had been under medical supervision. In 1960, the Bert Bell Benefit Bowl, also known as the Playoff Bowl, was founded in his honor. In 1963, Bell was officially cemented into football history when he was formally inducted into the National Football Hall of Fame.