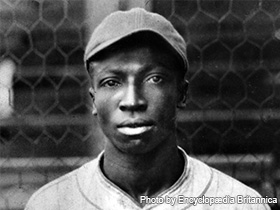 Negro League star and Baseball Hall of Famer James "Cool Papa" Bell played for both the Pittsburgh Crawfords and the Homestead Grays.

Born in Starkville, Mississippi, in 1903, James "Cool Papa" Bell is often regarded as the fastest man to ever play the game of baseball. James Thomas Bell began his baseball career as a pitcher for the St. Louis Stars of the Negro League in 1922. He later became a member of the greatly successful Pittsburgh Crawfords where he excelled as an outfielder, leadoff hitter, and base-stealer. His career lasted for nearly 20 years, during which time he played for a number of teams. In 1974, the Negro League Committee elected him to the National Baseball Hall of Fame. Bell died on March 7, 1991.

James Bell was born on May 17, 1903, in Starkville, Mississippi. He grew up in a poor family with a single mother, a sister, and five brothers. In 1920, Bell’s mother sent him to live with his older brothers in St. Louis because Starkville did not have a Black high school. “I told my mother I’d go to school,” Bell later wrote, “but once I got to the big city, there was so much going on I didn’t have time for school” (Bell 165). The biggest distraction for Bell was baseball. He had been playing the game competitively since the age of thirteen and soon joined his brothers’ semi-pro team, the Compton Hill Cubs, as a left-handed pitcher. To support himself while he played semi-pro baseball and did not attend school, Bell worked at a packinghouse, making 53 cents an hour. In 1922, and over the protestations of his mother and sister, Bell began his professional career in the Negro Leagues with the St. Louis Stars as an outfielder and pitcher.

Over his 28-year career in professional baseball, James "Cool Papa" Bell played as a pitcher and outfielder for several different teams, accumulated a career batting average of around .350, and earned a reputation as one of the fastest men and the best base runner to ever play the game. He could run the bases in just twelve seconds. The trick, he explained, was to run a tight circle and touch the base with his left foot instead of right so he could push off. Using this technique, Bell could steal two bases on one pitch, advance from first to third on a bunt, and score from second base on a sacrifice fly ball. Fellow Negro League player Josh Gibson often told fans, "Cool Papa Bell was so fast he could get out of bed, turn out the lights across the room, and be back in bed under the covers before the lights went out."

Bell first got his nickname “Cool Papa” while he was playing for the St. Louis Stars. His teammates called him "Cool" for his ability to keep striking out opponents without any sign of nervousness. The nickname later became the slightly longer, "Cool Papa," because, as Bell himself said, “’C’mon, Cool,’…didn’t sound right. That’s not enough of a name…got to put something else on it” (Bell 167). His team’s manager decided “Cool Papa” had a certain ring, and it stuck.

Today, Bell is often referred to as the "Black Ty Cobb," but perhaps Cobb would have been known as the “white Cool Papa” if Bell had ever gotten the chance to play in the major leagues. Instead, because of the color line, Bell was a full-time Negro League player, playing five games a week for five months a year, and barely making enough to support him and his wife Clara Belle, whom he married in September 1928. Cool Papa’s financial situation became even more dire as the Great Depression swept through baseball. In 1932, the Western League, in which Bell played, collapsed, so Bell left the St. Louis Stars and joined Cumberland Posey, Jr.’s team, the Homestead Grays, in Pittsburgh. Posey managed to assemble an impressive squad for the 1932 season, but he, too, soon ran out of money to pay his players. Thus, Bell was forced to “barnstorm” with the Kansas City Monarchs, playing exhibition games often against white teams, to make a living. In 1933, Bell returned to Pittsburgh to play for the Crawfords, a former sandlot team owned by Gus Greenlee, who had filled out his team’s roster by poaching Homestead Grays players. The Crawfords only played in Pittsburgh for six years, but those six years had a lasting impact on Pittsburgh’s Hill District and Black baseball. Greenlee signed seven future Hall-of-Famers to his team. Lonnie Wheeler, in his biography of Bell, wrote, “The Crawfords had been built to dazzle, not to last. They were a starburst of a ball club” (Wheeler, "Limbo,” 00:00-00:12). The Crawfords, including Bell who excelled in Pittsburgh as an outfielder and leadoff hitter, kept the public interested in a Negro National League at a time when the sport was on the verge of collapse.

Eventually, Greenlee ran into his own cash flow difficulties, so in 1937, Bell followed his friend and teammate Satchel Paige down to the Dominican Republic to play for Ciudad Trujillo. Greenlee considered Paige and Bell’s departure an unforgivable betrayal, so he banned them from playing in the Negro National League for two years. By this point, Bell had realized he could make more money playing internationally, and he would not have to deal with the humiliation of a color line. For the next four years, “Cool Papa” and Clara Belle lived in Mexico, where he played primarily for the Alijadores of Tampico.

In 1941, Bell decided to return to the United States.  He originally intended to play for the Chicago American Giants, but because of a contract dispute, he signed with his former team, the Homestead Grays, instead. His second stint with the Grays, from 1943 to 1947, is often considered the prime years of his baseball career. Indeed, the Grays, who had relocated to Washington, D.C. in 1940, had become a national phenomenon in their own right and were a far cry from the nearly bankrupt team of 1932. But money problems still plagued “Cum” Posey’s team, and 1946 was the last time the Grays turned a profit. Thus, James “Cool Papa” Bell spent his final three years as a player in the Negro Leagues shuffling between the Detroit Senators and the Kansas City Monarchs. In 1950, Bell started managing the Kansas City Monarchs’ development team, the Stars. Bell’s goal was to send as many promising Black players to the major leagues as he could. He helped at least twenty young men reach stardom before he had to settle for a more consistent source of income than baseball. After almost thirty years in the game, “Cool Papa” became a janitor for City Hall in St. Louis.

James Thomas Bell was one of the best players to ever step up to the plate. Recognition of his talent finally came in 1974 when the Negro Leagues Committee inducted him into the baseball Hall of Fame.  Seventeen years later, on March 7, 1991, just six weeks after his beloved wife and partner Clara Belle died, James "Cool Papa" Bell passed away from natural causes.