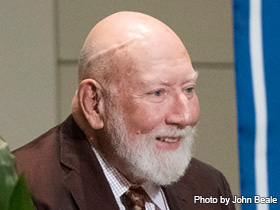 Born in Charleroi, Pennsylvania, in 1935, Donald P. Bellisario has had an admirable career as a television writer, producer, and executive director of famous, military-themed shows. With over ten television show productions, two books, two screenplays, and a television movie, Bellisario has received many awards for his dedication and hard work. Some of these include the Edgar Allan Poe Award, as well as a Writers Guild of America Award nomination for best television show.

Donald Paul Bellisario was born on August 8, 1935, in Charleroi, Pennsylvania, to Albert Jethro and Dana Lapcevic Bellisario. His father was of Italian descent and owned a local tavern where veterans came to share World War II stories that Bellisario actively listened to. As soon as Bellisario was old enough, he entered the armed forces and served in the Marine Corps from 1955 to 1959. He was discharged as a Sergeant and awarded the Marine Corps Good Conduct Medal. After his service, Bellisario attended Pennsylvania State University and, in 1961, earned a Bachelor's Degree in Journalism. His first career was in advertising, which he pursued for fifteen years before moving to Hollywood at the age of 41.

He was hired to write a screenplay for "Baa Baa Black Sheep" and eventually promoted to a producer within this television series. "Baa Baa Black Sheep," also known as "Black Sheep Squadron," aired on The National Broadcasting Company (NBC) from 1976-1978. The story of the show was the life and struggles of US Marine Corps aviator, Greg "Pappy" Boyington, and his World War II Squadron who were called "Black Sheep" because they were thought of as misfits and screw-ups. This was Bellisario's first big break in show business.

After meeting the actor Tom Selleck, Bellisario came out with the television series called "Magnum P.I." set in Hawaii with Selleck starring. It aired from 1980 to 1988 on CBS (formerly known as the Columbia Broadcasting System) and was one of the highest-rated shows on television during that time. Selleck played easy-going private investigator Thomas Magnum who, amidst his various cases, had conflicts with ex-British Army Sergeant Major Higgins. Their conflict came from Magnum believing that Higgins was really his boss, Robin. The Village Voice called "Magnum P.I." a "watershed television series" in how it portrayed returning Vietnam veterans. Veterans Magnum and two other characters, T.C. and Rick, were portrayed as normal humans instead of the crazed killers that the Vietnam veterans had been depicted as in the first wave of films about the war and its aftermath. This television show put Bellisario up for several Emmy nominations, as well as for receiving the Edgar Allan Poe Award from the Mystery Writers of America for the 1981 episode "China Doll."

Bellisario started his own production company in 1980 called Belisarius Productions and has used his company for all of the screenplays he has created or written. He wrote pilots for many popular productions such as "Tales of the Gold Monkey," "Airwolf," "Quantum Leap," "Tequila and Bonetti," and "JAG." "Tales of the Gold Monkey" aired in 1982 on ABC and was an adventure show that focused on early aviation, exotic locals, and action. "Airwolf" ran from 1984 until 1987 and focused on a high-tech military helicopter and its crew during the Cold War era. "Tequila and Bonetti" aired only from January 1992-April 1992 and was then adapted into an Italian television series. The Los Angeles Times wrote a review on this show saying "Don Bellisario's script is an awkward clash of tones in which wacky comedy and heavy drama coexist about as well as Serbs and Croats." This comedy-drama was not very helpful to Bellisario's career.

He wrote and directed a movie called Last Rites in 1988, which failed at the box-office. It was known as the worst movie in 1988 and in a review written by Roger Ebert, was referred to as "not only bad filmmaking, but also offensive as well - offensive to my intelligence." All of the negative reviews and criticism made Bellisario realize his true passion was for television.

"Quantum Leap" was a television show that aired on NBC from 1989-1993 and starred a quantum physicist who became lost in time when he was trying out one of his time travel experiments. This show was particularly unique because the main character Sam could jump into a new host and use his own actions and thoughts to control their body. Dr. Sam Beckett was played by Scott Bakula and Dean Stockwell played Admiral Al Calavicci. It is posted on the Internet Movie Database (IMDb) website's biography of Bellisario that "Quantum Leap" was his favorite show that he ever produced. This show earned Bellisario Emmys as well as two Golden Globe Awards.

His television series "JAG" had a very distinctive military theme and was aired on both CBS and NBC from 1995-1996. It took a temporary break, then returned on January 3, 1997, and continued until 2005. It starred David James Elliot as Cmdr. Harmon Rabb and Catherine Bell as Lt. Col. Sarah MacKenzie. "JAG" takes place in Washington DC in the Department of the Navy's Office of the Judge Advocate General who defends criminal cases and conducts investigations. In 2003, the show spawned a spinoff, NCIS (Naval Criminal Investigative Service).

In an interview with Variety, the question was asked if he has patriotism intentionally involved in "JAG" and Bellisario said, "Are we a patriotic show? Yes, we have always been." In the article, "I'm Constantly Surprised How the Corps has Stayed with Me," written by Bellisario and published in the "U.S. Naval Institute Proceedings," Bellisario states "I thought a lot about the Corps and was surprised at the pride I felt in having been a Marine." Within this same interview, Bellisario said "I rely heavily on incidents I either experienced or heard of while a Marine and my experience in the Corps has given me an uncanny ability to anticipate military events."

Bellisario has been married four times and has seven children with his previous three wives as well as eight grandchildren. He married his current wife, Vivienne, on November 27, 1998. Bellisario was named distinguished alumnus of Pennsylvania State University (Penn State) in 2001 and endowed a $1 million Trustee Matching Scholarship for the Communications program. He still visits his alma mater and told the U.S. Naval Institute Proceedings that, "I still swell with pride when I hear the Marine Corps Hymn and wish I could salute the flag at Penn State football games instead of putting my hand over my heart."

In 2003, Bellisario became the creator and executive director of the television show "NCIS" that follows a team branched from Naval Criminal Investigative Services and their daily law enforcements and investigations. He received a star on the Hollywood Walk of Fame on Tuesday, March 2, 2004; it is located at 7080 Hollywood Boulevard.

Photo Credit: John Beale. "In honor of a $30 million gift by alumnus Don Bellisario, the College of Communications has been renamed in the television producer's honor.." Photograph. Licensed under Fair Use. Cropped to 4x3. Source: Penn State News. Source: Online Resource.