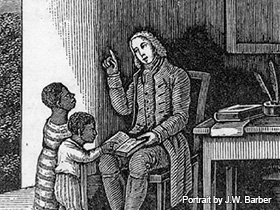 Anthony Benezet was born in St. Quentin, France, in 1713. As an infant his family moved to London. At age 18 he and his family moved to Philadelphia and it was here that Anthony would live most of his life. He spent his life as a caring teacher and was a rare outspoken voice for the rights of blacks in America. Benezet wrote many letters and pamphlets on the immorality of slavery and published them at his own expense, distributing them in America and Britain. His life was dedicated to helping the less fortunate. He died in May of 1784.

Anthony Benezet was born in St. Quentin, France, in 1713. The Benezet family had a long history of upstanding citizenship. While Benezet's parents were wealthy and had good reputations, it was their religious beliefs that would force them from their native France. The Edict of Nantes was decreed on April 13, 1598, granting French Protestants a good deal of rights in a primarily Catholic country. In 1685, however, Louis XIV repealed the Edict of Nantes. Due to the revocation of the Edict, Benezet's family chose, as many French Protestants did at the time, to leave the country instead of facing persecution. In 1715, the family relocated to London. In 1731, he moved to Philadelphia with his family. At the age of 14, Anthony joined the Society of Friends, better known as Quakers.

While he tried at first to follow in his father's footsteps as a merchant, young Anthony would realize before long that his heart was not in the work. In 1739, he became a schoolteacher. For three years he taught in Germantown, now an integral part of the city of Philadelphia. From there he accepted a position as a teacher at what is now the William Penn Charter School. In 1754, he began to teach at a Quaker school for girls and, due to his good reputation, many of the daughters of the wealthy and influential inhabitants of Philadelphia sent their daughters to his school.

Benezet was unique in his style of education at the time. He was compassionate and understanding, rather than adhering to an authoritarian philosophy of education. He used different methods for different students' personalities. He was the not the stereotypical strict schoolmaster, rarely punishing students for their transgressions. He also made noticeable progress in teaching the deaf. The fact that he taught blacks from his home in the evenings was a testament both to his love of teaching and his philanthropic nature.

It was around the year 1750 that his strong feelings against slavery are generally noted. He began his career as an abolitionist; first by pleading his case with his fellow Quakers, eventually convincing them that owning slaves was a morally bankrupt endeavor. Much more difficult than convincing his religious community was persuading the general public. He set up an evening school with the express purpose of educating slaves. He also wrote many anti-slavery pamphlets and letters in the hopes that they would appeal to some of America's and Britain's more influential residents. In one of his better known works, Some Historical Account Guinea, Benezet describes with much detail the native inhabitants of Africa and their culture. In this work he also lays bare the ruthlessness of the Portuguese and later the English in their enslavement of Africa's people. It is noteworthy that these works were published at Benezet's own expense.

Benezet was regarded by many as a guiding light for mankind. In response to some pamphlets that Benezet sent to Benjamin Franklin, Franklin had this to say in return: "I am glad to hear that such humane sentiments prevail so much more generally than heretofore; that there is reason to hope our colonies may in time get clear of a practice that disgraces them."

Sadly, Anthony Benezet would not live to see slavery completely abolished for he died on May 3, 1784, in Philadelphia. Even after his death Benezet continued to help slaves be educated and liberated. He left money in his will not only for his wife, but he also left money for individual slaves that he knew that needed aid. He left the bulk of his estate to the "Free School for the Black People of Philadelphia."