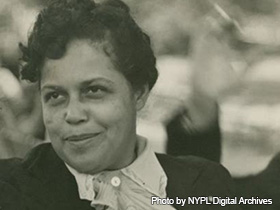 Writer of the column The Ebony Flute in Opportunity, Harlem Renaissance figure Gwendolyn Bennett spent her last years in Kutztown.

Gwendolyn Bennett was born on July 8, 1902, in Giddings, Texas, to Joshua and Maime Bennett. She attended Brooklyn Girls' High in New York, and she later studied fine arts at Columbia University and Pratt Institute. Bennett quickly became involved in the Harlem Renaissance movement, and she wrote a column entitled "The Ebony Flute" for the magazine Opportunity. She also published two short stories and a variety of poems, all focusing on the African-American experience in the United States at that time. In her later years, Bennett lived in Kutztown, Pennsylvania. She died on May 30, 1981, in Reading, Pennsylvania.

Gwendolyn Bennett was born on July 8, 1902, in Giddings, Texas, to Joshua and Maime Bennett, who were both teachers at a Native American reservation. She moved with her family to Washington, DC, in 1906, but her parents soon divorced. Although her mother obtained custody, Bennett's father kidnapped her, and the pair, along with her stepmother, lived in hiding around the East Coast and Pennsylvania. They eventually moved to New York, where Bennett attended Brooklyn's Girls' High from 1918 until 1921. While attending Girls' High, Bennett was awarded first place in a school wide art contest, and she was the first African American to join the drama and literary societies.

After graduating in 1921, she began taking art classes at Columbia University and the Pratt Institute, and she graduated from both in 1924. During her undergraduate education, Bennett's poem "Nocturne" was published in Crisis in November 1923, and in December of the same year, her poem "Heritage" was included in Opportunity, a magazine published by the National Urban League. In 1925, Bennett continued her fine arts education at Academic Julian and Ecole du Pantheon in Paris, France. During her studies there, Bennett worked with a variety of mediums, including watercolor, oil, woodcuts, pen and ink, and batik. This was the beginning of her development as a graphic artist. However, most of her pieces from this period were destroyed in 1926 in a fire at her stepmother's home.

In 1924, Bennett attended a literary dinner at the behest of Charles S. Johnson, the editor of Opportunity. At this event, Bennett socialized with older and younger members of the African American literary movement, including W.E.B. DuBois, James Weldon Johnson, Wallace Thurman, Langston Hughes, and Zora Neale Hurston. Bennett joined the group of younger authors, whose goal was to get their works out to a wider audience through more mainstream media sources. Also during this time, Bennett's poem, "To Usward," was published in Crisis and Opportunity. This piece uses the image of a ginger jar to represent the unity of the Harlem Renaissance, while celebrating the diversity of the voices present in this movement.

Her work during this time was highly praised. Theodore Ward, a well-known playwright, declared that Bennett was one of the "most promising of the poets out of the Harlem Renaissance" and called her a "dynamic figure noted for her depth and understanding."

According to J. Mason Brewer, Bennett was now a "nationally known artist and poetess." He further stated that, as a result of her Texas birthplace, "Texans feel that they have a claim on her and that the beautiful and poignant lyrics she writes resulted partially from the impression of her early Texas surroundings."

In 1926, Bennett left Paris and moved back to New York, where she was employed as the assistant to the editor for Opportunity. During this time, she was awarded the Alfred C. Barnes Foundation fellowship. Later that year, she returned to Howard University, where she had taught fine arts in 1924. Despite her separation from Harlem and the center of the Renaissance, she remained as assistant editor for Opportunity and was given a literary and fine arts column in the magazine. Upon the creation of this column, the Opportunity's editor wrote that Bennett was "one of the most versatile and accomplished of the younger poets."

Bennett called her column "The Ebony Flute," with the goal of singing the songs of African American artists and their works. This column, which ran for almost two years, was used to distribute news about the many artists who were involved in creating and maintaining the Harlem Renaissance. "The Ebony Flute" represents the majority of Bennett's work, and it is the piece that she is most well known for.

During her time as a columnist for Opportunity, Bennett also continued working on her poetry. In 1926, she published "Hatred," an emotional and poignant poem, with no clear basis for the hatred. She later published "To a Dark Girl," which speaks of her pride in her race and her cultural heritage.

In addition to her poetry, Bennett also wrote two short stories, the most well known of which is entitled "Wedding Day." This story was published in Fire!! and is a soul searching tale about the exploration of the black American identity. In "Wedding Day," the protagonist, Paul Watson, struggles against the racial prejudices present in the United States during that time, and he eventually moves to Europe. He fights with the French Army during the war, and then he meets a white American woman, whom he falls in love with. They become engaged, but on the day of the wedding, Watson finds a note from her, with the excuse that white women do not marry black men. Bennett uses this fictional story to highlight the pervasiveness of racial prejudices at that time, both in the U.S. and abroad.

In 1927, Bennett resigned from Howard University, as a result of her relationship with a medicine student named Alfred Jackson. The Howard administration disapproved of their engagement, at which time Bennett voluntarily left the school. That summer, Bennett taught at Tennessee State College before moving to Florida, where her husband worked as a physician. She was not happy in the neighborhood where they lived, and Jackson constantly berated her for not keeping up with her writing. Although she had continued her column for Opportunity while living in Washington, Florida was simply too far away from Harlem for her to receive any substantial news to write about. During the three years that she lived there, Bennett became increasingly unhappy and isolated, writing very little.

In 1930, she and her husband moved to Long Island in the midst of the Great Depression. Bennett began working with the Federal Writers Project and the Federal Art Project, and began to return the work that she had found so inspiring prior to her move to Florida. Nonetheless, Bennett and Jackson suffered a very unhappy marriage ridden with financial difficulties. They eventually lost their home, and Jackson died in the early 1930s.

Bennett was given the position of Assistant Director of the Harlem Community Art Center in 1937, which quickly grew to become a center of activity. Between 1938 and 1941 Bennett served as director of the Center, but in 1941, she was suspended from her directorship, after which she began teaching at the Jefferson School for Democracy. In 1943, she began directing the George Washington Carver School, which along with the Jefferson School, was labeled a "Communist" organization. After an investigation by the House Committee on Un-American Activities, Bennett removed herself from the public eye and began working for the Consumers Union. She later married Richard Crosscup, and they moved to Kutztown, Pennsylvania, working together as antique collectors and dealers. Crosscup died in 1980, and a year later, on May 30,1981, Bennett passed away in Reading, Pennsylvania.