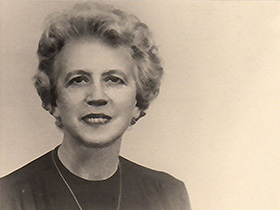 Bentel wrote over two hundred episodes of the radio serial Happiness Aheadwhich aired in Pittsburgh during the late 1940s.

Born in Rochester, Pennsylvania, in 1901, Pearl Bentel was well known locally for writing radio serials for the Pittsburgh station WWSW. During her life, she wrote four novels‚ three of which about college life for women‚ and continued to write for radio stations until her death in 1986.

Pearl B(ucklen) Bentel was born in Rochester, Pennsylvania, on October 23, 1901. She was the daughter of George Louis and Carrie Bucklen. She married Charles Albert Bentel on March 10, 1925, and had two children. With Bentel, she lived in Pittsburgh and Glenshaw in Pennsylvania, and finally Chagrin Falls, Ohio.

Before attending the University of Pittsburgh in the 1920s, Bentel worked as a clerk for an industrial firm in Freedom, Pennsylvania. Following her job there, she married Charles Albert Bentel and completed her education. After that, she was involved with the university throughout the 1940s and 1950s. She was also a member of the Microphone Playhouse of Pittsburgh.

Bentel secured a job as a copywriter for an advertising agency during World War II. Following that, she joined the Pittsburgh radio station WWSW (known more currently as the 3WS or WWWS) as a serial writer. Serial writers of the 1940s were responsible for writing short stories or plays that were later performed on a radio show. After three years as a general serial writer, Bentel wrote a two-hundred-episode serial Happiness Ahead (1946-1947)for one year, which was sponsored by the Gimbel Brothers Department Store.

After a somewhat successful career as a serial writer, Bentel began her career as a writer of literature for young teens, particularly young, high school women. Her first book, Program for Christine, was published in 1953 involving a young girl's career in the radio business. Her next book, I'll Know My Love, published in 1955, follows the story of courageous Finnish people during the Russian (former USSR) occupation of Finland in World War II. Bentel used her relationship with a Finnish drama student, whom she came to know through the Pittsburgh Playhouse, to write the story. After I'll Know My Love, Bentel returned to the young American girl genre with her final two books; Freshman at Large in 1959 and the sequel Co-Ed off Campus in 1965. These two novels follow the story of a young woman and her progression from a freshman college student to a mature adult. After Co-Ed off Campus, Bentel never released another book. She continued her career as a radio serial writer and in advanced age, she served as a mentor to other fledgling writers, including Rod Serling. Bentel was planning to write yet another book for the college girl series but never completed it.

Bentel's college-girl series was her most significant work, but Program for Christie was the only work that received an award. The award came from the Junior Literary Guild, and Bentel was among the first to be featured in the guild's program that encouraged reading among young people by awarding well-written books. Other than the mention from the Junior Literary Guild, none of Bentel's other works received awards, but she continued to receive sponsors for her radio serials on the WSWW Pittsburgh radio station.

Pearl Bentel was not a well-known figure outside of Pennsylvania. Her novels are difficult to find, as aresources about her life; however, the sources that do exist say that Pearl Bucklen Bentel was a talented woman and writer. Following a strong career in radio and fiction writing, a lasting marriage, and two children, Pearl Bucklen Bentel passed away in Chagrin Falls, Ohio, in 1986.