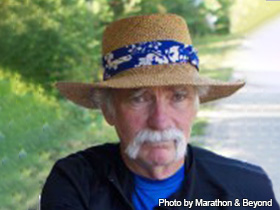 Richard Benyo has written books about running and running events for all ages and skill levels, including Running Past 50 (1998).

Marathon guru and journalist Richard Benyo was born in Jim Thorpe, Pennsylvania, in 1946. Following college, he became a newspaper editor in neighboring Lehighton and then moved on to magazine editing. He spent a number of years affiliated with Runner's World and served as editor of Marathon & Beyond magazine between 1997-2015.

Running aficionado Richard Stephen Benyo was born in Jim Thorpe, Pennsylvania, on April 20, 1946. His parents were Andrew Joseph and Dorothy Rita Herman Benyo. After graduating from high school he enrolled at Bloomsburg State College (now Bloomsburg University), earning his BA in 1968. He also did academic work at George Mason University in Fairfax, Virgina. In the early 1970s, he met Jill Wapensky and married her in April 1972. They divorced seven years later. He has since married Rhonda Provost.

Benyo's career in writing began when he took a job as the managing editor of the Lehighton Times-News in 1968. During his last year at that publication, 1972, Benyo was awarded the Best Local Column Award from the Pennsylvania Newspaper Publishers Association. He then moved to an editorial position with Stock Car Racing magazine. He remained with the Alexandria-based magazine for five years before joining Runner's World in 1977. He remained there several years while writing numerous books about running and participating in several marathons and more, including a 300 mile run between Death Valley and Mt. Whitney that he chronicled in a book in 1991. Between 1997-2015, Benyo served as editor ofMarathon & Beyondmagazine. He has also written, cowritten, and edited many programmatic books about dieting and workouts.

At the time of this writing, Richard Benyo is the president of the board of directors and co-race director of the Napa Valley Marathon and a former Noble Grand Humbug of E Clampus Vitus, a West Coat historical/fraternal organization, per his website.