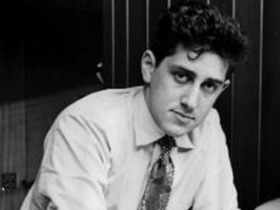 The Berenstains are the award-winning authors of over 200 Berenstain Bears books.

Award-winning children's book author of The Berenstain Bears series Stan Berenstain was born in Philadelphia, Pennsylvania, in 1923 and attended The Philadelphia College of Art and the Pennsylvania Academy of Fine Arts. Read more here.

Stanley (Stan) Berenstain was born on September 29, 1923, in Philadelphia, Pennsylvania. His parents were Harry and Rose Berenstain. In 1946, he married JanGrant, an author and illustrator, with whom he had two sons, Leo and Michael.

Berenstain attended The Philadelphia College of Art from 1941 to 1942, where he met Janice Grant, his future wife. In 1946, he attended the Pennsylvania Academy of Fine Arts. Stan and Jan Berenstain began their collaborative career drawing cartoons for magazines. The Berenstains were also co-creators of "It's All in the Family," an illustrated feature first published by McCall's magazine. In 1962, Berenstain and his wife published their first children's book The Big Honey Hunt.

Stan Berenstain and his wife have received numerous awards for their work on The Berenstain Bears series. They have received multiple Philadelphia Library Children's Reading Round Table honor book awards. They have also received a Silver Diploma in 1980, 1982, and 1987 for The Berenstain Bears' Christmas Tree television special. They have received The School Bell Awards from the National Education Association, The Best Book Award from the American Institute of Graphic Arts, and The University of Chicago Best Book Award, among many other awards that are too numerous to count.

In article for the Philadelphia Inquirer, Gayle Simms noted this:

In 2002, after many more Berenstain Bears books, Stan and Jan wrote a joint autobiography, Down a Sunny Dirt Road. In it, he responded to the question of why they hadn't retired: "Why would we retire? We thrive on what we do. We travel extensively. We go to a lovely, salubrious place where honeybees hum, where rainbow trout match rainbow skies, where the rivers run clean and the air is sweet, where there's beauty around every bend in the sunny dirt road. It's a wonderful place. It's called Bear Country. We go there every day."

Stan Berenstain died of cancer on November 26, 2005, in a Doylestown hospital. He was survived by Jan, four children, and legions of fans whose childhoods he had enriched.