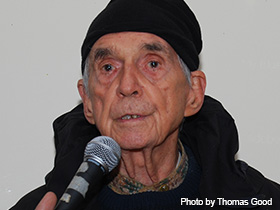 Priest, poet, novelist, and social activist, Fr. Danial Berrigan was tried in Norristown for his part in an anti-draft protest during the Vietnam War.

Born in Virginia, Minnesota, on May 9, 1921, Daniel Berrigan grew to be a well-known poet and writer who focused both on religious and political issues. He was an active leader in opposing the Vietnam War, and he wrote Night Flight to Hanoi (1968), a compilation of diary entries and poems stemming from his non-violent resistance missions to release three American pilots from North Vietnam. Berrigan also wrote the novel The Trial of the Catonsville Nine (1970) and Prison Poems (1973), two very different accounts of his experiences being tried and imprisoned for his protest in the early 1970s. Berrigan spent the later years of his life living in the Upper West Side in NYC. He died April 30, 2016.

Daniel Berrigan was born to Thomas William and Frieda Berrigan on May 9, 1921, in Virginia, Minnesota. He grew up with his brother,Philip, who was his counterpart in antiwar activities in the latter part of his life.

Berrigan obtained his BAfrom the St. Andrew School on the Hudson in 1946 and his MAfrom Woodstock College in 1952. Berrigan's career developed from a strong religious foundation notably influenced by Dorothy Day, a crucial organizer of the pacifist Catholic Worker movement. Berrigan became a Roman Catholic priest and was also involved with ministerial work throughout his career. He also taught religious studies and theology courses in various universities.

Berrigan wrote poetry that reflected his worldly beliefs combined with the struggle he faced from being a priest, as he secretly wished he could get married. Regardless of his buried longing for love, he remained focused on his work. Berrigan received the Lamont Poetry Award for his first published volume, Time Without Number (1957). Berrigan strongly opposed racial discrimination, poverty, and foreign intervention by America. Berrigan was always close to his brother Philip, who was also a priest. Together, the two became active with the Civil Rights Movement. Berrigan and his brother Philip were nationally recognized for publicly challenging America's role in Southeast Asia during the Vietnam War in the late 1960s.

Berrigan traveled to North Vietnam to free three American pilots trapped there at the time of war. He later published Night Flight to Hanoi (1968), a vivid account of his North Vietnam mission. Further motivated, Berrigan created a national peace group, Clergy and Laity Concerned about Vietnam. Berrigan's most public protest surfaced on May 17, 1968, in Catonsville, Maryland. Nine Catholic militants, led by the Berrigans, confiscated the files of young American men who could have been drafted for war. These protesters poured blood onto the files, then burned the documents to ashes. The nine men stayed outside, praying until they were arrested. The "Catonsville Nine" were sentenced to three years in jail. Berrigan, along with Philip, decided to rebel and go underground rather than face a prison sentence. After years in hiding, the Berrigan brothers were captured on August 11, 1970, and sentenced to a trial. Berrigan wrote the novel The Trial of the Catonsville Nine (1970), describing what transpired in the courtroom during his trial held in Norristown, Pennsylvania. Berrigan was sentenced to 18 months in jail in Danbury, Connecticut. Berrigan's later works illustrate his experiences enduring prison life. He wrote Prison Poems(1973) while in jail. These poems received mixed reactions. Some believed this collection was amongst the best work of his life; others said the poems focused on trivial matters compared to the serious issues at hand. Shortly after their release from jail, Daniel and Philip Berrigan participated in the first Plowshares Action, protesting the General Electric Plant in King of Prussia, Pennsylvania. Philip passed away in 2002, but that didn't keep Daniel from participating in peace events. On Good Friday in 2010, Daniel was arrested at the US Intrepid War Museum for keeping tourists out of the museum. A judge later dismissed the charges on June 1, 2010.

Berrigan lived out the rest of his life in New York. Hedevoted much of his time to volunteerwork in hospitals; he especially focused on AIDS patients. In 2008, he was awarded a honorary degree for his work and persistence in peace from The College of Wooster. Among Berrigan's accomplishments, he was largely recognized for publishing 14 volumes of poetry throughout his life. He died in New York on April 30, 2016.