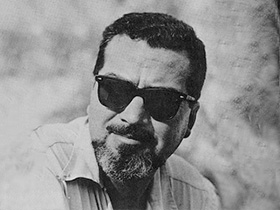 Alfred Bester was born on December 18, 1913, in New York City and, after graduating with a BA from the University of Pennsylvania in 1935, spent the productive years of his life writing science fiction novels, short stories, radio scripts, and television scripts. During this period, Bester produced two ground-breaking science fiction novels whose impact is still felt on the genre today, The Demolished Man (1952), which won the first Hugo Award in 1953, and The Stars My Destination (1956, also known as Tiger! Tiger!). By the time of his death on September 30, 1987, in Ottsville, Pennsylvania, Bester was nominated for four additional Hugo Awards and posthumously received the Grand Master Award for his achievements in the genre of science fiction at the 1987 World Science Fiction Convention.

Alfred Bester was born on December 18, 1913, in New York City to James J. Bester and Belle Silverman Bester. His father, a shoe salesman, provided modestly for the family which, as Bester himself described it, was hardworking and middle class. His home life was characterized from an early age by a liberal attitude towards religion and society; in Bester's own words: "I was born a Jew but the family had a laisser faire [sic] attitude toward religion and let me pick my own faith for myself. I picked Natural Law.

When he came of age, Bester attended the University of Pennsylvania in Philadelphia, where he studied a wide variety of subjects and, in 1934, joined the prestigious Philomathean Society, one of the oldest literary societies in the United States. After receiving his BA in 1935, Bester decided to continue his education by enrolling as a post-graduate student at Columbia University to study law and later at New York University to study protozoology, but he terminated his studies and dropped out of both universities before completing a degree. It was during these years that Bester met Rolly Goulko, a future radio actress, whom he married on September 16, 1936.

Bester's literary career began when he won an amateur story competition hosted by Thrilling Wonder Stories magazine in April of 1939 with his submission, a short story entitled "The Broken Axiom." While it is rumored that the editors of Thrilling Wonder Stories, already familiar with Bester's talent, designed the competition as a means of propelling his career, his aptitude at writing short fiction and science fiction was clearly evident; Bester spent the next several years supporting himself by producing short stories to be published in Thrilling Wonder Stories magazine and Astonishing Stories magazine, such as "Voyage to Nowhere" (1940), "The Mad Molecule" (1941), and "Adam and No Eve" (1941). These early stories, which were well-received if not widely read, demonstrate a clear progression towards the style that would later define Bester's writings—an aggressive cynicism which emphasizes personal change in the wake of catastrophe—and offered him the opportunity to migrate between literary mediums as he continued to improve his craft.

One such opportunity occurred in 1942 when Bester received a job writing for DC Comics on several high profile series, such as Superman, Batman, Captain Marvel, and The Green Lantern; he is widely credited with penning the original Green Lantern Oath during this time. In 1946, Bester made another career change and turned his literary talent to writing radio scripts, producing scripts for various radio shows including Charlie Chan, Nero Wolfe, and The Shadow. Beginning in 1950, Bester took the opportunity to begin writing for television and produced scripts for several television shows, most notably Tom Corbett, Space Cadet and The Paul Winchell Show. In 1956, Bester ceased writing television scripts and focused on writing features for Holiday magazine, where he earned the post of Senior Literary Editor and became the magazine's most prolific contributor; he held the title until 1970 when the magazine ceased publication and produced very little science fiction during his tenure, which prompted him to note "... and here I am, here I am, back in my workshop again, immured and alone, and so turning to my first love, my original love, science fiction..."

As a writer of science fiction, Alfred Bester is best known for the novels he produced early in his career, which both garnered fame and secured his reputation. His first novel, The Demolished Man (1952), pits a telepathic policeman against a powerful business tycoon who has committed a murder with no discernible motive. The novel, which won the first Hugo Award for science fiction excellence in 1953, was met with both critical and public acclaim; it differs from traditional science fiction of the era because instead of focusing on an escapist exploration of fantastical environments and technology, Bester retains a uniquely human focus on the characters and their motivations. Bester describes his style in the following words:

Call me an Hommes libre writer. Look, I write about Man, contemporary Man, subjected to wild, free, unusual stresses and conflicts. For the unusual I'm forced to use sf [science fiction]. Back in the 19th century authors of the Richard Harding Davis type sent their characters to Africa, Asia, or South America in order to confront them with the unusual. Today we send them into the future or out into space to do the same thing.

As Carolyn Wendell notes in Science-Fiction Studies, The Demolished Man "remains a model of the psychological SF-mystery story today."

Bester's second novel, The Stars My Destination (1956, also known as Tiger! Tiger!), is arguably his greatest contribution to the genre. Inspired by Dumas' The Count of Monte Cristo, The Stars My Destination is a tale of revenge sought by a man left adrift in space and, as science fiction author Samuel R. Delany points out, is considered "by many readers and writers, both in and outside of the field, to be the greatest single sf novel." Characterized by Bester's focus on the human psyche and his cynical analysis of societal corruption, as well as what author William L. Godshalk describes as a "serious playfulness" with regards to the novel's central themes, The Stars My Destination has left a lasting impact on the science fiction genre; Bester's work here is considered to be the forbearer to both the New Wave and Cyberpunk movements within science fiction, the former focusing on experimentation and literary sensibility and the latter exploring the contrast between high technology and low quality of life.

Though his later works failed to match the acclaim of his early novels, Bester continued to produce short stories and novels throughout his life. Many of his short stories, such as "The Men Who Killed Mohammed" (1958), about a group of men who attempt to change history through time travel, as well as his later novels, including The Computer Connection (1975) and Golem 100 (1980), were well-received and continued to contribute to Bester's reputation as a science fiction author. Four of his works were additionally nominated for Hugo Awards throughout the duration of his career, though none of them won: "The Men Who Killed Mohammed" (1958), "The Pi Man" (1959), "The Four-Hour Fugue" (1974), and The Computer Connection (1975).

As he reached old age and the limits of his ability to continue writing, Alfred Bester retired with his wife to their rural home in Ottsville, Pennsylvania. His wife's death on January 12, 1984, combined with the general deterioration of his own health and his increasingly frequent consumption of alcohol, dealt a harsh blow to Bester's well-being; as David Streitfeld of the The Washington Post comments, at this time Bester was "honored in theory but broke in reality." In honor of his lifetime of contributions to the science fiction genre, Bester was invited to attend the 1987 World Science Fiction Convention as the Guest of Honor to receive the Memorial Grand Master Award from the Science Fiction Writers of America, an organization of dedicated professional science fiction writers. Sadly, Bester's ailing health proved an insurmountable obstacle and he died on September 30, 1987, shortly before he was to receive the award. Alfred Bester died alone and with little money, all of which he left to his favorite bartender, who was surprised to receive the meager inheritance and could not even remember who Bester was.

Despite the misfortune of his final years, the legacy of Alfred Bester in the science fiction genre continues to live on through tribute and homage to the late author's memory. Two of Bester's works have been published posthumously, the non-genre novel Tender Loving Rage (1991) and the incomplete Psychoshop (1998), which was finished by Roger Zelazny and presented as a collaborative effort. In addition to this continued interest in his writing, Bester's name appears in several later works of science fiction, chief among them a "Psi Corp" agent by the name of Alfred Bester in the television series Babylon 5 (1994), a mechanic named Bester in the television series Firefly (2002), Al Phee, a time-traveler in Spider Robinson's Callahan's Crosstime Saloon (1977) named for Bester's nickname, "Alphie," and the governing principle of time travel referred to as "Bester's Law" in F. Gwynplaine MacIntyre's "Time Lines" (1999).