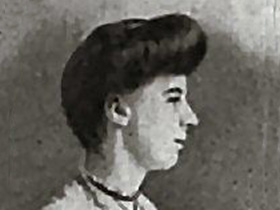 Margery Williams Bianco, author of one of the most beloved children's books of all time,The Velveteen Rabbit, or How Toys Become Real (1922), spent several years attending a Pennsylvania school.

Margery Williams Bianco is the author of the popular children's book, The Velveteen Rabbit (1922). Before her writing career took off, she spent at least two years attending school in Pennsylvania. She took a break from writing after having two children. Later, Bianco continued writing and authored many more children's books, including Winterbound (1936), which won her a Newbery Medal.Over her lifetime, Bianco published a compilation of over 25 novels and children's books.

Born in London on July 22, 1881, Margery Winifred Williams was born to a barrister and famous classical scholar. As a young child, Bianco had a vivid imagination and would create different personalities for each of her toys. But her father stressed the importance of reading for her and her older sister. He believed reading was the primary source of education for children under the age of ten. Because of her father's coaching, Bianco grew up with a love of reading and soon developed a passion for writing, using personalities from her childhood. Bianco's father died when she was seven years old. When she was nine years old, her family moved to the United States, first to New York, then settling on a farm in Pennsylvania. Bianco attended the Convent School in Sharon Hill, Pennsylvania, until she was seventeen years old. By this time, Bianco had decided to become a writer even though her stories had previously been rejected. Nonetheless, Bianco managed to write children's stories for a London firm that published Christmas books. In 1902, Bianco published her first novel for adults, The Late Returning. She published a few early adult novels afterward; however, Bianco had little success with them.

In 1904, Bianco married a book department manager, Francisco Bianco. The couple lived in London for three years, where Bianco gave up writing so that she could raise their two children, Cecco and Pamela. Bianco and her family traveled back and forth across Europe and finally settled in Turin, Italy, where her husband fought for the Italian army in World War I.

While staying home with her children, Bianco became really interested in the work of Walter de La Mare, a poet she believed wrote clearly from a child's point of view. She so greatly admired his work that she later wrote an essay, "De La Mare," in honor of him. By 1921, Bianco and her family settled in the United States and Bianco returned to writing. This time, however, Bianco turned to her children and reminisced about her own childhood. She found inspiration in watching her children play with toys and animals.

This inspiration soon led her to write her most popular book, The Velveteen Rabbit or How Toys Become Real in 1922. In this book, she creatively expressed William de la Mare's literary concepts of wonders and miracles from a child's point of view. In The Velveteen Rabbit, a young boy received a toy rabbit as a Christmas gift. Initially, the young boy dismisses the gift but later becomes fond of the rabbit, so much so that it becomes real to the child. When the young boy fell ill with scarlet fever, his family decided to burn the rabbit to keep the illness from spreading. By that time, however, a fairy turns the rabbit into a real animal and he becomes alive. The Velveteen Rabbit was well-received, although some critics believed that the children's book was "too sentimental." The tale of the rabbit who comes alive still lives on in adaptations of the story in audio, video, and film.

In 1925, Bianco published Poor Cecco and in 1927,The Skin Horse. Consistent with her two later works and fascination with toys and miracles, these novels told stories of animals that possessed human traits and emotions. In 1927, Bianco wrote a short story, The Little Wooden Doll, a story about a doll who had been abused by two children and was restored by a third child. Although most reviewers praised Bianco's ability to create such lifelike characters, some criticized for their persistently sad themes. Bianco, however, believed that most beautiful stories came out of sad tales because depicted the essence of growth and change.

Later in her life, Bianco began to write young adult novels. Again focusing on characters who lived lives different from normal success, she received a Newbery Medal in 1937 for Winterbound (1936), a story about two teenage girls who are forced to take care of their family while their parents are called away without warning. In Other People's Houses (1939), she wrote about a young girl who chose to earn a living for herself in New York instead of going to college. And in 1944, Bianco wrote Forward Commandos!, a story that included an African-American character. During this time, portraying an African-American character was uncommon and it was different for Bianco, in that she rarely used male characters in her books.

Bianco fell ill the year that Forward, Commandos! was published. After three days in the hospital, Margery Williams Bianco died on September 4, 1944.