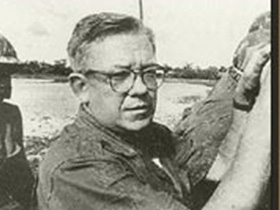 Bigart worked as a war correspondent during World War II, the Korean War, and the Vietnam War. He was awarded the Pulitzer Prize for Journalism twice.

Born in Hawley, Pennsylvania, on October 25, 1907, Homer Bigart was a war correspondent for the New York Herald Tribune and later the New York Times. Bigart won two Pulitzer Prizes: the first in 1946 for foreign correspondence in the Pacific and the second in 1951 for his work during the Korean War. Bigart also won the first Polk Award. Married three times, Bigart retired with third wife Elsa to Portsmouth, New Hampshire, in 1972 where he died on April 16, 1991.

Homer William Bigart was born on October 25, 1907, in Hawley, Pennsylvania, the son of Homer S. Bigart, a sweater manufacturer, and Anna Schardt. After high school, Bigart briefly studied architecture at Carnegie Mellon University (formerly the Carnegie Institute of Technology) in Pittsburgh. Shortly after Bigart's arrival, his professors concluded that he had no talent for drawing. After failing at architecture, Bigart transferred to New York University to study journalism. He never graduated. In 1927, Bigart got his first job as a part-time copy boy for the New York Herald Tribune. Bigart rose up the ladder to full-time copy boy, head copy boy, then reporter. In 1941, the New York Herald Tribune assigned Bigart to cover the air war in Europe, kicking off the career of one of the greatest war correspondents in history.

Bigart was one of the pioneers of modern war correspondence, facing danger and reporting facts. In 1943, Bigart was one of only a handful of reporters permitted to fly on daytime bombing raids over Germany, in which 25% of the aircraft were typically lost. In 1944, Bigart angered the Allied commanders for reporting Allied mistakes as well as triumphs. Nonetheless, Bigart entered Rome with the Allies on June 4, 1944. Bigart next reported from the Pacific, where he was on the last American air raid of Japan, and on September 2, 1945, covered the Japanese surrender. The next day, Bigart toured Hiroshima to see the damage caused by the drop of the atom bomb. Bigart received his first Pulitzer Prize in 1946 in recognition of his foreign correspondence in the Pacific.

Bigart's next challenge was to find and interview General Markos, an insurgent then hiding in the mountains of northern Greece, a goal he pursued after CBS correspondent George Polk was murdered during his own search for Markos. Bigart succeeded and for his efforts won the 1948 inaugural Polk Award for Foreign Reporting, named for his fallen colleague. In 1950, the New York Herald Tribune sent Bigart and his longtime rival Marguerite Higgins to report from Korea. The duo gave the Herald Tribune an edge over the New York Times because of their competitiveness. As reported in the Pittsburgh Post-Gazette on April 2, 2003, one of Bigart and Higgins' contemporaries, when asked the secret of their success, replied, "They hate each other, so neither ever stops working." Their efforts were rewarded when Bigart won his second Pulitzer Prize in 1951 for his work in Korea, this one shared by Higgins and four others.

In 1955, Bigart moved to the New York Times, where he covered domestic issues until pressed into service during the Vietnam War, during which he served as a mentor for younger reporters. Bigart's last war-related story was the trial of First Lieutenant William L. Calley in 1971 after the massacre at My Lai.

While not as fraught with danger, Bigart's personal life was one of constant change as well. In 1951, Bigart married Alice Kirkwood Veit, a colleague from the New York Herald Tribune. Bigart and Veit later divorced, and Veit died in 1959. In 1963, Bigart remarried, this time to CBS's Alice Weel, who died in 1969. Bigart wed children's book author Else Holmelund Minarik in 1970. Bigart never had any biological children, but he did have one adult stepchild from his marriage to Minarik.

In 1972, Bigart and his third wife Else retired to a farm in Portsmouth, New Hampshire. There, Bigart quietly lived the rest of his days until April 16, 1991, when he died at the age of 83. On July 6, 2002, the 175th anniversary of the naming of the town of Hawley, the town installed a plate at 824 Church Street, the site of his childhood home, in recognition of Bigart's service to his country and to journalism.