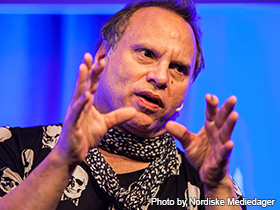 Buzz Bissinger was born on November 1, 1954, in New York City. After graduating from the University of Pennsylvania in 1970, he entered journalism. In order to get a job at the St. Paul Pioneer Press, he changed his byline from "Buzzy Bissinger" to H.G. Bissinger, as he never went by his birth name in his works. After leaving the Philadelphia Inquirer in 1988, where he won the Pulitzer Prize in 1987, he became a nonfiction novelist, which saw his 1989 book Friday Night Lights adopted into a movie in 2004. He currently works as an article-writer for Vanity Fair, where he averages three pieces a year. His 1998 article for the magazine, Shattered Glass, was also turned into a 2003 movie.

When Harry Gerard Bissinger III was born on November 1, 1954, he didn't have much of a say in the naming. It was a family name, and it's not that he didn't like it; rather, he thought it sounded a little aristocratic. Instead, he opted for "Buzzy," until his early professional career.

After graduating from the University of Pennsylvania in 1970, he worked at medium-circulation newspapers until he got a gig at the St. Paul Pioneer Press later in the decade, but an editor at the Minnesota-based publication said if he didn't adopt a more serious byline, he would not get the job.

"I started out as Buzzy Bissinger, which is difficult to say and made me look like a clown," Bissinger said. "David Hall, executive editor of St. Paul Pioneer Press, said he'd only hire me if I changed my byline, so I changed it to H.G."

After a brief stay in the Land of Ten Thousand Lakes, Bissinger returned to his college town, Philadelphia, and began writing for the Philadelphia Inquirer, which is where he truly started making a name for himself. Along with Daniel Briddleand and Fredric N. Tulsky, he won the 1987 Pulitzer Prize for the group's investigative reporting of the Philadelphia court system. Their work led to state and federal investigations.

In 1988, Bissinger left the City of Brotherly Love, uprooting his family to live in Odessa, Texas, for a year. In the preface of Friday Night Lights, he discusses how he was in search of a town that prided itself solely on high school football. It seemed that whoever he talked to referred him to this small enclave in deserts of western Texas. What he discovered over the course of the season was that Odessa was a narrow-minded, racist town, where the athletes were trying to live the ultimate dream: leave Odessa and play college football.

The book received critical acclaim as it raced up the best sellers lists. It dealt with the racism of the South but still managed to appeal to sports fans. The subjects of the story, Bissinger revealed at a lecture he delivered in October 2005 at Penn State University, were less than thrilled. Many felt betrayed, but he felt an obligation as a reporter to tell the whole story. This is one of Bissinger's most wellknown works, as it was turned into a screenplay and adapted for a 2004 film of the same name.

In 1997, Bissinger published his next major work, Prayer for the City, in which he documented the attempt of then-Philadelphia mayor Ed Rendell to rejuvenate the city. During the reporting process, he had nearly full access and was permitted to attend most government dealings. Although it was not as popular as Friday Night Lights, he knew that would be the case going into the assignment, as such a topic has a narrow audience. "[It's] my best book, my most ambitious book, but I knew halfway through it was going to have a very limited audience," Bissinger said. "Urban city, urban politics, not something people are interested in."

He also changed to the penname "Buzz" from H.G., which he has kept ever since.

During the late 1990s, Bissinger began contributing to Vanity Fair, which he continues to write for at the time of this writing. In 1998, he wrote an article, "Shattered Glass," about Stephen Glass, a reporter that had falsified several stories in his career. It was later turned into a 2003 movie of the same name.

In 2000, Bissinger moved to Los Angeles. He was asked to help to co-write screenplays for NYPD Blue, which was in its eighth season. Having never written before, it proved to be a tough experience. It also allowed him to see Hollywood in a new light.

Bissinger said he spent a great deal of his career trying to establish his own voice through his works and he felt that Hollywood writing was so formulaic that it kept him from truly enjoying the experience. "Every book writer goes out to Hollywood with stars in their eyes and you find out it's a factory," Bissinger said. Although writing screenplays proved to be a difficult task for the former journalist, part of the problem of his trip to the West Coast was the absence of his family. While he went out to Los Angeles, his kids stayed behind in Philadelphia. After just one season, he returned to Pennsylvania.

His last major piece was 2005 work Three Nights in August, in which he chronicled the St. Louis Cardinals through a three-game series against their biggest rival, the Chicago Cubs, in August of 2003. Bissinger revealed in the prologue of the book that he had always been fascinated by Tony LaRussa, who has a reputation for being one of the greatest minds in baseball history. LaRussa, who also included an introduction, said that he had wanted to do a book for some time, but the opportunity had never come along. When Bissinger came along, he was thrilled, as he was a fan of Friday Night Lights.

He just finished a screenplay with Disney based on the true story of an Olympic fencer. He has no idea when everything will be put together to begin filming. He has enjoyed the challenge even after the NYPD Blue experience.

"I love writing dialogue. I find it challenging," Bissinger said. "I think variation as a writer is good. Books are wonderful, but they're lonely. I recently wrote a pilot book for CBS that was not picked up...it was fun to collaborate. I've written a couple of screenplays that were bought by major studios that haven't been made. I really enjoy the challenge of that and it keeps me fresh."

Meanwhile, his former boss at the Philadelphia Inquirer is impressed how Bissinger can switch genres, something very few writers can do well. "I continue to marvel at he can switch gears," said Gene Foreman, former managing editor at the Inquirer and, at the time of this writing, a Penn State journalism professor.

As of this writing, Buzz Bissinger continues to contribute to Vanity Fair, has been a sports columnist for The Daily Beast since 2009, and is a longtime contributor to The New York Times, Wall Street Journal, and the Philadelphia Inquirer, according to his website. He has also cohosted the Buzz Bissinger Show with Steve Martorano on 1210 WPHT in Philadelphia, which debuted in 2012.