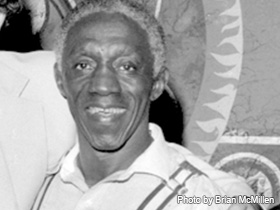 Renowned percussionist Art Blakey grew up in Pittsburgh, where he formed the Jazz Messengers.

Art Blakey, also known as Abdullah Ibn Buhaina, was an influential jazz musician and bandleader who helped pioneer modern bebop drumming and hard bop. Born in Pittsburgh, Pennsylvania in 1919, Blakey started as a pianist but switched to drums and played in bands with several early jazz greats. He developed a unique style of drumming and helped influence the direction of modern jazz. He also helped form the Jazz Messengers, a group featuring several prominent musicians. An accomplished musician, Blakey won numerous prestigious awards before his death in 1990.

Art Blakey was born in Pittsburgh, Pennsylvania, on October 10, 1919. The foster son of a devout Seventh-day Adventist family, he learned piano and the Bible at a very young age. By seventh grade, he was already an exceptionally talented musician. His jazz career began during his teenage years in Pittsburgh, where he had a piano gig at a nightclub called the Democratic Club. His musical direction changed abruptly, however, when the owner of the Democratic Club forced Blakey to switch to the drums to make way for another young pianist named Erroll Garner. As a drummer, Blakey found a mentor in Chick Webb, a celebrated drummer and bandleader. This experience gave him the experience and motivation to form his own band with Mary Lou Williams, an esteemed pianist. These early experiences helped Blakey develop the furious, yet controlled, style of drumming that made him famous.

Art Blakey's career began to take off as he toured with Fletcher Henderson, which was a steady gig at the Tic Toc Club in Boston, and gigs with artists such as Billy Eckstine, Charlie Parker, Dizzy Gillespie, and Sarah Vaughn. After a visit to West Africa, Blakey converted to Islam and briefly took the name Abdullah Ibn Buhaina, which led to the nickname "Bu." Blakey's music from the mid-1950s shows an African influence, partly as a result of this trip. Blakey collaborated with pianist Horace Silver, altoist Lou Donaldson, trumpeter Clifford Brown, and bassist Curly Russell to perform A Night at Birdland (1954), released by Blue Note Records. After this noted alliance, Blakey and Silver partnered to found the Jazz Messengers, a quintet that has featured numerous revered musicians over the years. Their first album together, Horace Silver and the Jazz Messengers (1954), shows incredible concord between musicians, an element maintained by the Jazz Messengers throughout the years. After the first year of the group, Silver left and formed his own group, but the Jazz Messengers thrived under Blakey's leadership. Blakey acted as both a performer and a bandleader and would alternate which of these positions he focused on, depending upon the state of the band.

As a performer, Blakey added unique elements, such as unmatchable driving rhythms and high hat two and four beats. He was one of the first drummers to master a polyrhythmic drumming style. He strongly influenced the direction of modern jazz, and many of his techniques became strong illustrations of the hard bop genre. He also added strong, bluesy elements to the Jazz Messengers, giving them a unique and inventive sound. After Silver's departure, recordings of the Jazz Messengers demonstrated more command by the drums, as shown in such pieces as A Night in Tunisia (1960). Blakey spent time collaborating with Thelonious Monk in the late 1950s and fine, well-thought out music resulted. Art Blakey's Jazz Messengers with Thelonious Monk shows a meditated, talent-laden union of musicians. Blakey's musical skills and management caused the band to be one of the most popular and influential in the genre. Blakey and his band mates released several albums through Blue Note Records, including such standouts as The Jazz Messengers at the Café Bohemia in 1955. The recording of Moanin' in 1958 is considered to be a classic, demonstrating an emphasis on funk that was characteristic of the Jazz Messengers during that time. It also showed a return to a gospel influence, reminiscent of Silver's The Preacher.

Under Blakey's guidance, tenor player Wayne Shorter began to emerge as a writer, prompting resurgence in the popularity of the Jazz Messengers with such recordings as A Night in Tunisia and Freedom Rider. Blue Note Records released about 30 albums featuring Blakey and his fellow jazz artists. Blakey acted as not only a member of the band, but also a mentor for the other musicians. He taught band members new skills, helped cultivate their talents, and encouraged them to form their own bands. Countless seasoned jazz artists attribute their success to Blakey's guidance. Several Jazz Messengers alumni refer to Blakey as a "one-man university" in reference to his unmatchable teaching abilities. His efforts were recognized many times, earning him a place in the Newport Jazz Festival Hall of Fame in 1976 and earning him such honors as the Smithsonian Performing Arts Certificate of Appreciation (1982), the Jazz Master Award (1983), a Grammy for "Best Instrumental Jazz Performance" for the New York Scene Album (1984), the Jazznote Award (1986), and a Doctorate of Music from Berklee College of Music (1987). During the 1980s he helped create a renaissance for jazz music, prompting musicians to excel and listeners to be amazed by the power of their music.

Despite his age, Blakey's musical liveliness never seemed to dissipate, and as he told many sources, "I will play drums until Mother Nature tells me different. I will retire when I'm six foot under." Art Blakey remained a vital part of the Jazz Messengers until he lost his life to lung cancer on October 16, 1990 at age 71. He was living in Manhattan at the time. He was survived by four sons and four daughters. Blakey was awarded several honors posthumously, including the Martin Luther King Humanitarian Award (1991), the Grammy Hall of Fame Award for Moanin' (inducted for the single in 1998 and for the album in 2001), the Café Bianluca Jazz Hall of Fame Award, and the Pittsburgh Jazz Festival Award. Despite Blakey's death, the Jazz Messengers continued to produce fine jazz music and Blakey's memory lives on in the hearts of the countless musicians he worked with.